New Zealand filmmaker Jim Marbrook has won awards for his documentaries and short films, and lectures on television and screen production at the School of Communication Studies, AUT University. He has been working since 2008 on Cap Bocage, a documentary film about indigenous land rights, the environment and mining in New Caledonia, and is co-producer for the new feature film, The Dark Horse, based on his documentary Dark Horse about Gisborne speed chess champion Genesis Potini. Both films will screen in Auckland, Wellington, Dunedin and Christchurch during the New Zealand International Film Festival (from 17 July).

Philip Ball is a British science writer, whose work appears in Nature, New Scientist and Prospect, among others. His most recent book is Serving the Reich: The Struggle for the Soul of Physics Under Hitler (2013), and he will discuss his article Beauty ≠ Truth, written for Aeon magazine.

Warwick Freeman and Karl Fritsch, two of New Zealand’s most prominent jewellers, are the curators of Wunderrūma, an exhibition featuring 200 pieces by more than 75 contemporary New Zealand jewellers and artists alongside Māori taonga and Pacific and historical European jewellery. After being shown at Galerie Handwerk in Munich, it has returned to The Dowse in Lower Hutt (to 28 September), in partnership with the Museum of New Zealand Te Papa Tongarewa, with support from Creative New Zealand. Warwick and Karl will discuss the exhibition with special guests, at Wundern, a free event from 1-4pm. in the exhibition space on 21 June. 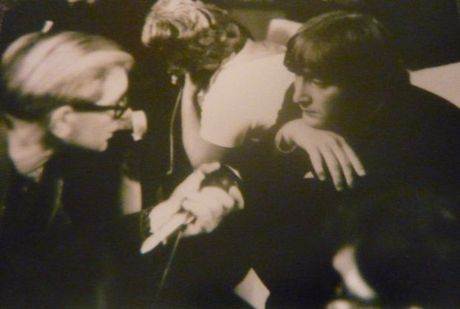 Tony Taylor is Emeritus Professor at the School of Psychology, Victoria University of Wellington, and was the first professor of clinical psychology in the British Commonwealth, and is the author of the memoir, Cockney Kid: the Making of an Unconventional Psychologist (Silver Owl Press, ISBN: 978-0-9864519-1-1). He interviewed New Zealand fans of The Beatles in 1964 for a paper about Beatlemania, and interviewed John Lennon during the group’s tour of New Zealand.

New Zealand writer and researcher Andy Neill has been living in the UK since 1989, and has written books about The Who, The Faces, and The Pretty Things. With Australian writer Greg Armstrong he is completing the new book, Half a World Away: The Beatles' Australasian Tour 1964, to be published later this year.

Joanna Rakoff has written for The New York Times, Time Out New York, The Los Angeles Times, Newsday, Vogue, and other publications. In 1996, aged 23, she took a job answering fan mail for reclusive writer J.D. Salinger, author of Catcher in the Rye., and has written about the experience in her memoir, My Salinger Year (Bloomsbury, ISBN: 978-1-4088-5550-8).

David Haywood has a Ph.D. in engineering and lives in Dunsandel. He writes the Southerly blog for Public Address, and is the author of the collection of humorous essays My First Stabbing, the children’s book The Hidden Talent of Albert Otter, and The New Zealand Reserve Bank Annual 2010 (all publicaddressbooks.com). He will discuss wind energy.

Jacques Kiki Karay: Kadi
From the soundtrack to the 2014 film: Cap Bocage
Played at around 8:40

The Beatles: I Feel Fine
The 1964 single, from the compilation album: Past Masters
(Parlophone)
Played at around 10:15

The Beatles: This Boy
B-side of the 1963 single I Want to Hold Your Hand, from the compilation album: Past Masters
(Parlophone)
Played at around 10:25