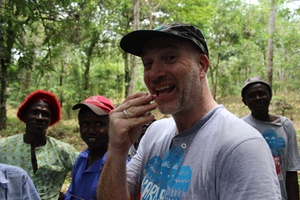 Simon Coley is the co-founder of All Good Organics, a New Zealand company dedicated to giving a fair deal to small farmers in the developing world, and to local consumers. On 13 June, it received the award for the world’s Fairest Fair Trader at the International Fairtrade Awards in Bonn.

Steve Hathaway is an underwater filmmaker based north of Auckland. His passionate advocacy for New Zealand’s oceans and sea lif is being expressed through his 93% initiative (referring to New Zealand's underwater world), and he helped his daughter create the Young Ocean Explorers television series.

English historical biographer Jenifer Roberts is the author of a number of books, most recently Fitz: the Colonial Adventures of James Edward Fitzgerald (Otago University Press, ISBN: 978-1-877578-73-1), about her ancestor, the orator, writer, politician and journalist who played a major role in public life over fifty years of New Zealand history.

Adam Hyde is the founder of the Book Sprints process, which helps groups create books from scratch in three to five days, and is about to take up a position at the Public Library of Science in San Francisco.

Taika Waititi is a New Zealand actor and director (Eagle vs Shark, Boy). His latest production, What We Do In The Shadows, is a mockumentary film co-written and directed with Jemaine Clement, about a group of vampires flatting in Wellington. It opens nationwide on 19 June.

Educational psychologist Rose Blackett is the President of the New Zealand Association for Gifted Children. She will speak at events during Gifted Awareness Week (15-22 June).

Shane Cave is an international anti-corruption consultant who divides his time between Papua New Guinea and New Zealand. A former print and broadcast journalist, he has just been touring his book of poetry and CD, The Sound of Words (Steele Roberts & Associates Ltd, ISBN: 9781927242131), to Auckland and Whangarei.

Jean-Michel Jarre: Equinoxe Part 4
From the 1978 album: Equinoxe
(Polydor)
Played at around 10:1

Vangelis: Blade Runner (End Titles)
From the soundtrack album to the 1982 film: Blade Runner
(Polydor)
Played at around 10:3

Joe Satriani: Always With Me, Always With You
From the 1987 album: Surfing with the Alien
(Relativity)
Played at around 10:50

Hot Chocolate: It Started With a Kiss
The 1982 single from the compilation album: Their Greatest Hits
(EMI)
Played at around 10:55