Mihingarangi Forbes leads a discussion about the evolution of te reo Māori in the media with Chief Executive of Pango productions and former Māori Television head of sport Bailey Mackey; The Spinoff's Ātea editor, former Mana and Rip It Up magazine editor Leonie Hayden and mother-of-five, producer and award-winning journalist Annabelle Lee. 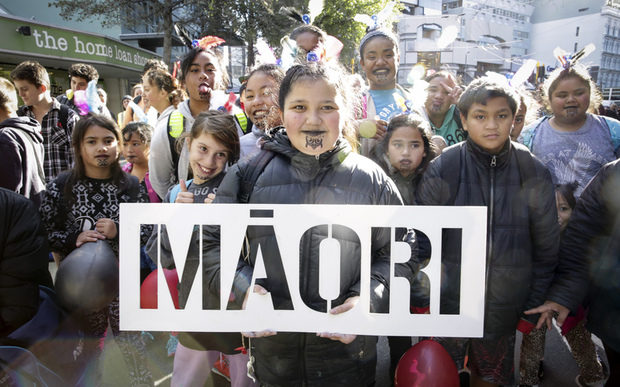 The reo Māori debate has been a hot topic in recent times.

RNZ has begun using te reo Māori sign-offs for some months now, and although it's an official language a vocal few have expressed outrage.

One of those was former Reserve Bank Governor Don Brash, who spoke to Kim Hill about his complaint.

"I'm saying it's an insult to 98 percent of the audience. That's the key point," Mr Brash said.

Mr Mackey said Māori broadcasting was in an "interesting" place right now, Ms Lee said te reo was "nearly" being used to its full potential in broadcasting, and Ms Hayden said Māori voices were being heard more today in the mainstream than in the past.

Looking back in RNZ's archives, Mihingarangi Forbes found a range of broadcasters had used te reo on air, including from programmes between the 1980s and 1990s.

However, most broadcasts before that were in English with just a scattering using any of te reo Māori going back to the 1960s.

Ms Hayden said while having some bilingual reo Māori lessons in mainstream schools were good, for those who are serious about learning the language, total immersion as in the Kōhanga reo was the best way to go.

"But even more importantly than having the total immersion education is to have a reo Māori-speaking home, because when you have the language spoken at home that's where you get the intergenerational transmissions and that's when the language starts to really recover.

In the '80s there was also a Māori language petition which served as a springboard for Māori broadcasting, perhaps pushing TVNZ to set up a Māori department which produced Koha, Te Karere, Waka Huia and eventually Marae.

Mr Mackey said those were needed at the time but things had changed, and now Māori broadcasting was at a crossroads and a fight for survival.

Ms Hayden said it was important to remember that a legal claim to increase the reo Māori funding for broadcasting was not intended to drive all the Māori content away from mainstream broadcasting and towards iwi radio and Māori television.

"People in the mainstream go 'cool, that's your thing now, we don't need to have anything to do with it' so I mean you do see a little bit of that divide,

"And I have heard the phrase 'they do have their own television station' and to me that's more divisive than ever."

Mr Mackey said Mr Brash's assertions were a good reminder of how far the country still has to go.

"We are in a bit of a bubble, because we do not see that type of dude and his perspectives very often in our lives.

He also said that the effect of the internet was both good an bad for te reo on the airwaves, as although it gave easier access to the language, the problem was with the share of resourcing for professional content.