Our Changing World for Thursday 18 October 2012 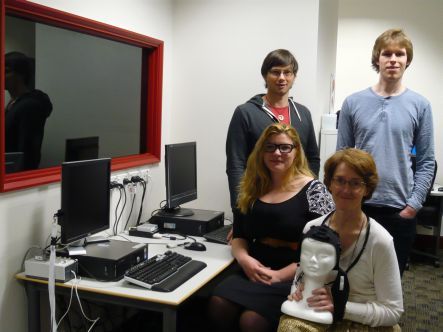 Gina Grimshaw (seated on the right) and her team, Jessica Clifton, Michael Tooley (left) and Josh Foster, with the headset they use to take a person's EEG (image: V Meduna)

More than 350 million people worldwide experience prolonged periods of depression. On World Mental Health Day on 10 October, the World Health Organisation released a statement in which it ranks depression as the leading cause of disability.

At Victoria University's school of psychology, Gina Grimshaw and her students are exploring asymmetries in brain function, particularly in the frontal lobes, and how they can be used to predict vulnerability to depression. While a part of a person’s vulnerability to depression has a genetic basis, first episodes of illness are almost always preceded by a stressful life experience such as the loss of a relationship or job, suggesting a complex interplay between genes and the environment.

Cognitive theories of depression suggest that people who are prone to depression have negative biases, which means that they anticipate bad outcomes, dwell on negative thoughts and find it easier to bring up negative memories.

In this interview Gina Grimshaw explains that healthy people show greater activity in the left frontal area of the brain, while people who are vulnerable to depression show the opposite pattern, even when they are not depressed. Her team studies such brain asymmetries in healthy young women by using electroencephalography (EEG) to chart the activity of a resting brain. The volunteers are then asked to complete certain tasks that monitor their reaction to negative, positive or neutral images or emotionally ambigious words to determine how these differences in brain activity influence the way they process emotional information.

The goal of the research team is to understand how vulnerability can become illness and to develop strategies to overcome it.

You can also listen to an earlier feature about University of Auckland researchers who have developed SPARX, a computer game to help young people beat depression.

Food for the Aged 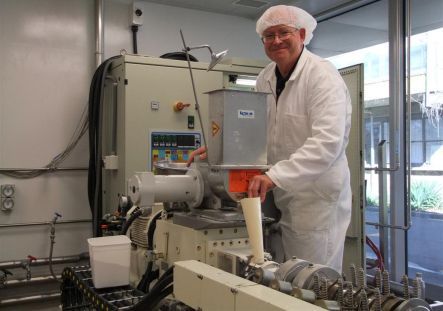 Allan Hardacre at the extruder

It’s predicted that by the 2050, one in ten New Zealanders will be aged 80 and over. With an ageing population comes associated problems like nutrition, as appetite decreases and it becomes harder to chew and swallow.

There is a lack of affordable, nutritious, tasty and convenient elderly-friendly foods on the market, so Allan Hardacre and his students are developing a high-protein food for the aged. Called a meat-analogue, it is made up of soy flour, wheat protein, and water, and is flavoured with vegetable hydrolysate (such as Marmite or Vegemite). The mixture is manufactured on an extruder in the Food Technology Pilot Plant at Massey University in Palmerston North. The extruder cooks the food as it pumps it out and the food comes out of the die as a long, thin beige sausage. This is then chopped to size, dried and can be cooked in a variety of ways. Ruth Beran watches as the food is made, and gets to test taste some as it comes off the extruder. 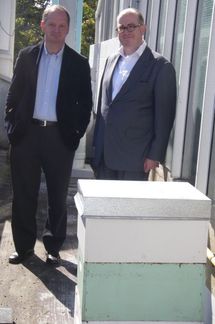 People who undergo anaesthesia often report feeling jetlagged after surgery, and it turns out that honeybees do as well. A team of researchers from the University of Auckland, including Guy Warman and James Cheeseman (left, image: A.Ballance) who are chronobiologists who lecture in anaesthesiology at the School of Medical Sciences, decided to study this chemically-induced jetlag in bees further to help better understand what is happening in people. Honeybees have body clocks that tell time from the angle of the sun, and the researchers were able to show that a honeybee that underwent a 6-hour anaesthetic, for example, underwent a 6-hour shift in its body clock.

Alison Ballance went to meet Guy and James to hear about the research, and how they plan to use the results to improve the situation for people undergoing anaesthesia in the future.

The work was supported by a Marsden grant and published earlier this year in the journal Proceedings of the National Academy of Sciences.

Two weeks ago science write Rebecca Priestley reported on the mysterious floating pumice caused by an underwater eruption along the Kermadec Arc. She was on board HMNZS Canterbury en route to Raoul Island in the Kermadecs, along with Department of Conservation staff, a group of students on a Sir Peter Blake Expedition and a science team sent by Pew Environment Group, which included Rochelle Constantine from the School of Biological Sciences at the University of Auckland. Rochelle is a marine mammal expert, and she is trying to collect biopsy samples from bottlenose dolphins and humpback whales in the waters around the Kermadecs to try and solve the mystery of exactly which species the dolphins belong to, and which population the humpback whales belong to.

Rebecca Priestley goes ashore on Raoul Island to talk with Department of Conservation staff about their annual whale survey, and follows Rochelle during the expedition as she attempts to collect biopsy samples, finally succeeding in getting a single dolphin sample.

Rochelle has now analysed that sample and here is her initial report: “Our sample from our trip was from a female bottlenose dolphin. After some initial uncertainty, we now know that the bottlenose dolphins at Raoul Island are the same type as found around coastal NZ - Tursiops truncatus. There were some thoughts that they might be the smaller Indo-Pacific form that is found in warmer water regions like Australia, New Caledonia and the Solomon Islands - but we can now rule that out. Initial examination of the genetics show some shared haplotypes (maternally inherited DNA) with dolphins found in Northland, but to say anything conclusive we will need more samples from this population. I am excited about the possibility of chipping away at this question of how the Raoul Island dolphins are linked to mainland New Zealand - the fact they are the same species is a very interesting beginning and will keep working on this population.”

You can find stories from last year’s Kermadec series here, and a previous Our Changing World interview with Rochelle Constantine, in which she talks about the results of the joint Antarctic whale research consortium, and speculates on the humpback whales in the Kermadecs.

The 14th mystery sound from the Our Changing World opening theme is a Chatham petrel. You can find them featuring in a story about research being carried out during the daytime on Rangatira/South-east Island here, and again in a night-time feature here. There are many more bird stories in our bounteous bird collection - begin that adventure here.