Our Changing World for Thursday 11 October 2012

Toxoplasmosis is a disease caused by the parasite Toxoplasma gondii. It infects most warm-blooded animals including humans, and its primary host is cats. Toxoplasmosis can lead to abortions in humans and animals, and makes mice and rats unafraid of cats and more likely to be eaten, hence passing on the disease. Humans can become infected by contact with cat feces or eating contaminated meat.

Massey University’s Wendi Roe (right) and Laryssa Howe (left) worked together to identify toxoplasmosis as the cause of death for dolphins recently found washed up on New Zealand shores. It is not clear where the parasite came from, or how it infected the dolphins, however it is thought that maybe the dolphins ate infected fish or came in contact with parasites in the sediment.

Ken MacKenzie is professor of chemistry in the MacDiarmid Institute at Victoria University of Wellington. He researches advanced inorganic materials, such as ceramics, cements, glasses and inorganic polymers. He specialises in the development of new inorganic materials and their structural investigation, using multinuclear solid-state magic-angle spinning nuclear magnetic resonance (MAS NMR). This is a tool more usually used by physicists, but it allows him to ‘interrogate’ the nucleus of atoms. He is interested in developing more environmentally friendly polymers, and integrating new functions such as nanopores.

PhD student Mahroo Falah Poorsichani, who holds a MacDiarmid PhD Scholarhip, and PhD student Joanne Rogers explain their areas of work which are looking at adding new functionality to polymers, that are used, for instance, in light-emitting diodes. 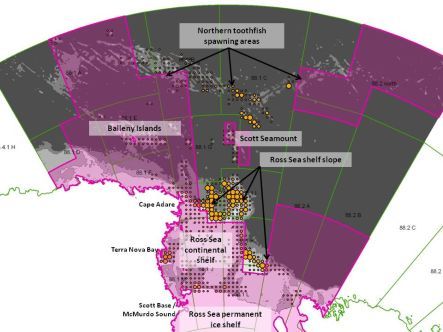 New Zealand's proposal would put the highlighted parts of the Ross Sea under protection.

Later this month, the international body responsible for the management of the Antarctic ocean, the Commission for the Conservation of Antarctic Marine Living Resources, or CCAMLR, will consider New Zealand's proposal for a marine protected area in the Ross Sea. The proposal covers about 2.5 million square kilometres, an area nine times the size of New Zealand, and if successful, this would be the largest stretch of protected ocean in the world. However, New Zealand has also established an exploratory toothfish fishery in the Ross Sea, which would continue outside the protected area.

This year's CCAMLR meeting is seen as important by environmental groups as the commission will concentrate on establishing a representative system of marine protected areas in the Southern Ocean to provide a reference for scientific research on the impacts of activities such as fishing, as well as opportunities for monitoring the impacts of climate change in the waters surrounding the Antarctic continent.

In this feature, NGO and fisheries representatives discuss the propopsal and its chances of success, particularly as it goes head to head with another from the United States. You can hear from filmmaker Peter Young, whose film The Last Ocean has been raising the issue of marine protection in the Ross Sea, Greg Johansson, who chairs New Zealand's Industry Toothfish Committee, marine advocate Bob Zuur, who leads the WWF's Antarctic and Southern Ocean Initiative and Barry Weeber, the co-director of the Environment and Conservation Organisation of Aotearoa/New Zealand.

You can also listen to a discussion held at IceFest in Christchurch earlier this month.

The 13th mystery sound from the Our Changing World opening theme is a Dobson spectrophotometer, being used to measure ozone levels in the atmosphere above Arrival Heights, near Scott Base on Ross Island, Antarctica. There are plenty of stories about the frozen continent in our awesome Antarctic collection - enter here.