Our Changing World for Thursday 4 October 2012

The HMNZS Canterbury sailing through floating streams of pumice on the return voyage from Raoul Island (image: Rebecca Priestley) and Helen Bostock and HMNZS Canterbury coxswain Braden McKee with the biggest piece of pumice collected on the voyage (image: Sheelagh James).

Last week we heard from science writer Rebecca Priestley about her new book Mad on Radium. In this show she’s on board HMNZS Canterbury en route to Raoul Island in the Kermadecs, along with Department of Conservation staff, a science team sent by Pew Environment Group, and a group of students on a Sir Peter Blake Expedition. They left New Zealand in August, a day after Tongariro and White Island erupted, which meant that the volcanologist who was meant to be on board the ship remained in New Zealand. A day into the trip Rebecca was on the bridge of the ship when news of a massive floating raft of pumice came through. But which underwater volcano did it come from?

Helen Bostok, a marine geologist with NIWA was on board so she was tasked with collecting some pumice for later analysis. Andrew Cowie from GNS Science works with Geonet and he was able to cast light on recent volcanic activity in the area, which included Monowai and Havre volcanoes. Back in New Zealand Rebecca caught up with Richard Wysoczanski from NIWA to find out about the Kermadec Arc, and Alison Ballance caught up with PhD students Melissa Rotella and Simon Barker who were given pumice sample to analyse, which confirmed that the pumice almost certainly came from an underwater eruption from Havre volcano.

Rebecca Priestley (left, image: Bruce Foster) wrote a science column for the New Zealand Listener magazine on the pumice mystery, and an online blog explores the topic further, showing how marine organisms attach to pumice and are carried around the world’s oceans.

You can find stories from last year’s Kermadec series, including a piece by GNS geologist Cornel de Ronde on the volcanic arc, here.

New Use for Recycled Plastics

In New Zealand, less than a quarter of at least 200,000 tonnes of plastic used each year is recovered through recycling, and all of the recycled plastic material is exported. But now, a chemical engineer at the University of Canterbury has come up with a technology that uses recycled plastics, and may eventually also reduce the amount of plastic that ends up in landfills.

Shusheng Pang is using a hot-press process to produce building materials by mixing recycled plastics from milk bottles, ice-cream containers and bags with sawdust from timber milling operations. The two waste products combine to a material that is stronger and more durable than wood and could be used in outdoor structures to replace chemically treated timber. The plastic-wood composite remains stable when exposed to water, intense UV radiation and freeze-thaw conditions, and the research team hopes to expand the process to incorporate other types of plastics which are currently not recycled but deposited in landfills. 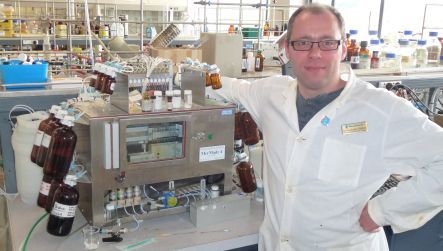 Vyacheslav Filichev in front of the DNA synthesiser

Massey University’s Vyacheslav Filichev has developed a new way to look at DNA interactions in living tissue. This is important for the development of therapies in disease, namely cancer.

The current Gold Standard technique for gene painting is called FISH (fluorescence in situ hybridisation). These probes denature DNA to create a new DNA duplex. Filichev is using 'Click Chemistry' to develop a sequence specific DNA probe which has been patented. Called TINA (twisted intercalculating nucleic acids), these probes form triple DNA helices, by binding to DNA duplexes through alternative hydrogen bonding. So unlike FISH, these probes are non-destructive.

It is possible to view the reactions through a confocal microscope in living tissue and to identify how the probes interact. The molecules fluoresce only after binding with the DNA.

Ruth Beran goes to Massey University in Palmerston North, to speak with Vyacheslav Filichev and colleague Tracy Hale who hopes to use the probe to study cancer in living cells.

Biomechanics of the Gut part 2

We journey into the ‘dark inner space’ of the human gut again with physiologist Roger Lentle from Massey University, who specializes in physical processes of the digestive system. Last week we heard how the muscles of the small intestine work. This week Roger tells Alison Ballance about new discoveries relating to the mucin which lines the gut wall – the work reveals that the mucin is not a continuous carpet across the villi as previously believed, but is actually a series of blobs of mucin, which has implications for the way nutrients, and perhaps in the future drugs, are absorbed.

The 12th mystery sound from the Our Changing World opening theme is a little spotted kiwi, recorded in Zealandia sanctuary in Wellington. Listen to that story here, or head to our big bird collection for a box of feathered fun.