Our Changing World for Thursday 25 October 2012 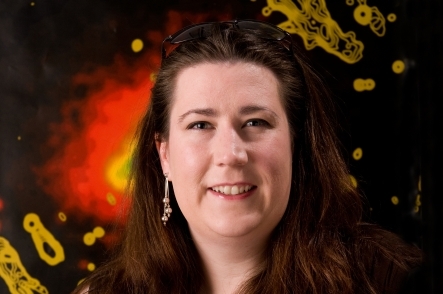 Victoria University astronomer Melanie Johnston-Hollitt (above) received a Marsden grant this week to survey the southern skies for galaxy clusters (large structures in the universe that consist of hundreds of galaxies bound by gravity) and the spectrum of radio waves they emit. She will use two telescopes at a remote site in Western Australia to catalogue the characteristics of these diffuse radio emissions, which are thought to be the remnants of shockwaves created by colliding galaxies or radio haloes caused by turbulence.

The Murchison Wide Field Array (MWA) and Australian SKA Pathfinder (ASKAP) radio telescopes have both been built as part of the Square Kilometre Array, which is currently under construction in Australia and South Africa. They provide astronomers with unprecedented sensitivity and this project aims to undertake the first study of a representative sample of radio emissions from galaxy clusters in the hope of addressing outstanding questions in astrophysics, including how cosmic ray particles found in these super structures were accelerated, where they originated and how large-scale magnetic fields in the universe formed?

Scroll further down for a full list of the 2012 Marsden grants and previous interviews with recipients. 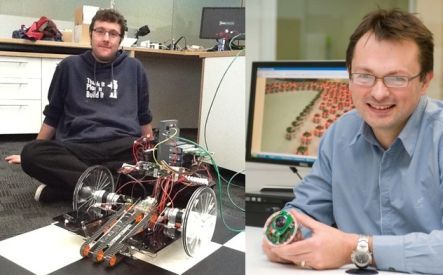 Victoria University of Wellington’s Will Browne (right) and Henry Williams (left) are working on autonomous robots, such as those that would go into a collapsed building, and are getting them to learn how to navigate by themselves rather than with human interaction. Commands are sent from a base station, such as a computer or laptop, via Bluetooth to the robot to build up its intelligence.

When a robot is in a new environment it has to build a map of where it is, and to localise where it is, but you can’t do one without the other. Using probability and filtering, the two elements are brought together. This is called simultaneous localisation and mapping (SLAM). However, the probability variance in a new environment is huge, so Henry Williams’ tried to reduce this by using if/then rules, for example, if the robot senses a wall, then it will turn right. Building up these rules the robot was able to go from the start position to the goal position successfully after multiple training runs.

One application for these robots is in a search and rescue situation, where small, cheap disposable robots could be sent in first to map an area, and this information could then be transferred to a large, more expensive robot, equipped with things like a heat seeking device. This larger robot could then follow the map developed by the smaller robots without needing to learn it all by itself.

Henry Williams is also collaborating on a system developed by the Queensland University of Technology called Rat SLAM, which is based on the behaviour of rats. Rats are very good at navigating and Rat SLAM uses visual input to localise and map, for example, using an omnidirectional camera on a car which can capture 360˚ images. Rat SLAM is currently being tested to see whether certain visual regions weighted on usefulness will improve the localisation of the robot, so for example dismissing images of the sky or the verges, which are pretty uniform and provide limited information, as opposed to images from directly in front on the vehicle, which change frequently.

The Molecular Biology of Ryegrass

Perennial ryegrass is the most common grass on New Zealand farms, and underpins the country's agricultural industry.

Barry Scott, from Massey University and the Bio-Protection Research Centre, focuses on understanding the molecular basis of symbiotic interactions between plants and microbe. He is especially interested in the symbiotic interaction between the endophyte Epichloe festucae and perennial ryegrass. In this mutually beneficial relationship the host provides nutrients for endophyte growth and a means of dissemination through the seed, whereas the endophyte provides biological protection to the host. By tinkering with genetics and tipping the fine balance that exists between the ryegrass host and the fungi, Barry hopes to find out about the chemical signalling that takes place between the two. Alison Ballance catches up with Barry in his Palmerston North lab (referred to affectionately as Scott Base), along with PhD students Daniel Berry and Gemma Cartwright. Work on reactive oxygen species, which are produced by the fungi, is being funded by a Marsden grant awarded in 2010.

Spring to the Street 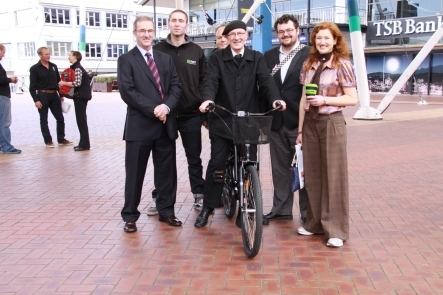 The Department of Corrections team took home one of the big prizes: a Kona bike donated by the Bike Barn (image: GW)

This month, Our Changing World joined hundreds of Wellington commuters for Spring to the Street, a challenge organised by the Greater Wellington Regional Council to encourage people to leave their cars at home for three weeks and instead walk, bike or catch public transport. More than 1700 people, 190 teams and 110 workplaces around the Wellington region took part, and several workplaces managed to register all staff for the challenge. This year's winners included Destinee Robinson (highest scoring individual participant), the Department of Correction (highest-scoring team) and the Electricity Authority (one of several workplaces where all staff took part). In this feature, you can join us on our street-friendly journeys and hear from the organisers and some of the winners.

The 15th mystery sound from the Our Changing World opening theme is a peristaltic pump, from a story about aging wine using electrical currents. You can find that story here.