Our Changing World for Thursday 1 November 2012

A hermit crab and a couple of decorator crabs (left) and a piecrust crab (right) - all native crab species that were trapped and released in Oriental Bay (images: A. Ballance)

The Ministry for Primary Industries (MPI) manages New Zealand’s biosecurity systems, trying to prevent unwanted pest and diseases arriving in the country and becoming established. As well as biosecurity checks at familiar places such as airports, MPI contracts NIWA to carry out regular checks in the marine environment, targeting high risk areas in harbours that are international ports. These surveys are carried out twice a year around the country, and involve diving, trapping and using a benthic sled to collect samples from the seafloor. 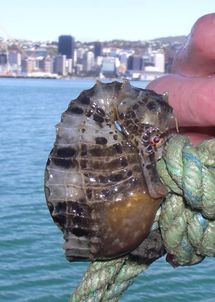 Alison Ballance joins NIWA marine biologists Kate Neill and Warrick Lyon on board NIWA vessel Ikatere in Wellington Harbour to see how the work is done. As well, Brendan Gould, manager of MPI’s Surveillance and Incursion Investigation Group explains why it is important to monitor high-risk harbours such as international ports for new marine pests, and NIWA principal scientist Graeme Inglis talks about the science behind the survey protocol for the marine biosurveillance programme.

Native species caught in traps, such as the pregnant male seahorse (left) and the eleven-armed starfish (below) are counted and then returned to the sea.

The marine biosurveillance surveys focus on looking for the following six species: 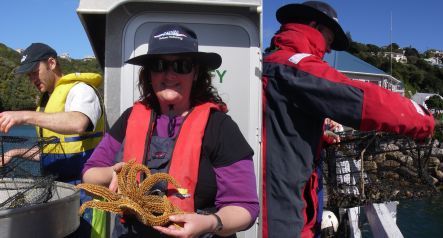 Richard Cryer, Chris Barber and team with their arch bridge, and Alessandro Palermo amidst some of the 36 bridges built solely from MDF and glue.

Bridge building has been one of the litmus tests for second year University of Canterbury civil engineering students for almost 20 years. Canterbury University structural engineer Alessandro Palermo from Civil and Natural Resources Engineering challenges his students to build a bridge using just MDF (medium density fibreboard) and glue – and then test it to destruction while it is placed across the river that runs through the university. The 4-metre long bridge must hold first one and then two people, and then break when the third person walks on. Prizes are awarded for aesthetic design and structural efficiency.

This year, one hundred and ninety students built 36 bridges, and Alison Ballance headed along to the university’s civil engineering lab to find out how the competition works, and to see some of the novel bridge designs - while they were still in one piece.

Bad weather meant the competition was postponed by two days, allowing students Richard Cryer and Chris Barber time to paint and decorate their bridge. However, they report they underestimated the flexibility of MDF, and their arch bridge deformed and bent so much that it became too short and fell in the river! Student Courtney McCrostie was pleased that her team’s bridge performed exactly as required, breaking when the third person stood on it.

Courtney McCrostie with her team's bridge before testing (left), and breaking as required with three people on it (right).

While most people define cartography as the art or technique of making maps or charts, at Geographx's Roger Smith believes it is all about communicating geographic or spatial information to the end-user. He believes maps should also look good too, but if the map communicates effectively then it will also be clearly laid out, contain the right information, and be easily and unambiguously understood. If the map has an aesthetic quality, it is also more likely to be hung on a wall and be more enticing to look at, which is what Geographx is aiming for.

Geographx specialises in 3D maps, and in September 2010 was commissioned by Sydney-based publisher, Millennium House, to manage the cartography for Earth Platinum, a limited edition world atlas of unprecedented size. The atlas stands 1800mm high, contains 128 pages and weighs 120kg and takes two people to turn the pages.  A double page spread from the atlas is displayed on the walls of the Geographx office which is located in the Dominion Observatory, at the top of the cable car in the Wellington Botanic Garden. This building has past associations with time-keeping, astronomy and maritime navigation.

The 16th mystery sound is a titi, or sooty shearwater, calling just before dawn on Rangatira or South-east Island in the Chathams. You can find that story here, or in our New Zealand Birds collection.