Our Changing World for Thursday 7 July 2011

Ged Wiren netting fish at the outlet to a rock pool on Meyer Island, and the HMNZS Otago (left) and the Braveheart at anchor with Raoul Island just visible to the left (images: A. Ballance)

The Kermadecs Biodiscovery expedition headed to New Zealand's remote sub-tropical Kermadec Islands in May for three weeks of surveying and collecting, based on board MV Braveheart. Led by Auckland Museum fish biologist Tom Trnski, the trip involved 13 scientists from Auckland Museum, Te Papa, the Australian Museum and the Department of Conservation, with expertise in fish, marine and terrestrial invertebrates and botany. The idea was to carry out a comprehensive survey and collection of coastal marine species around each of the archipelago's four groups of island, and complement that with invertebrate and plant surveys on as many of the islands as possible.

Alison Ballance was on board to record events and discoveries, write a blog, and help out with fish collecting. In the first episode of a new Kermadecs series, she talks with NIWA's Malcolm Francis about the island group's unique mix of fish species, finds out about the expedition's aims from Tom Trnski, and then joins the 'fish team' as they use rotenone in a rock pool to collect fish. Australian Museum's Mark McGrouther, and Auckland Museum's Ged Wiren and Stephen Ullrich don their wetsuits and join Tom in the rock pool.

A group of artists also visited the Kermadecs in May - click here to find out more about their trip.

Mark McGrouther putting rotenone into an intertodal rock pool, and seabirds wheeling over the island (images: A. Ballance)

Magnetic South is an online game designed to help people explore the future of Christchurch together. Played over 25 hours on 24 and 25 June, over 850 people from New Zealand and 19 countries around the world took part. Almost 9,000 ideas were generated. The game ended two hours earlier than expected after a spike in traffic following Kim Hill’s interview with Christchurch innovation consultant Roger Dennis about Magnetic South on 25 June, click here to listen. 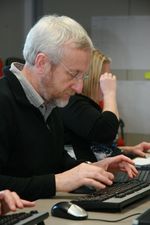 On 24 June, Ruth Beran was invited by Christine Harper to play the game with a small group of people at Landcare Research’s Wellington offices. There she spoke with one of the players Clarus’ Clare McLennan, and later with Bob Frame (left) from Landcare Research, who described some of the results once data from the game had been analysed.

Magnetic South used the Foresight Engine, an online tool developed in California by the Institute for the Future, and the game complements the Christchurch City Council’s Share an Idea initiative, allowing people to build on each other’s ideas. Information from Magnetic South will be appended to Christchurch City Council planning documents, and all data from the game is available to download. A visual summary of the “widest and deepest” conversations can be viewed here.

Gregor Yeates is a world authority on soil nematodes (round worms) and earthworms. Now retired from an illustrious career with DSIR's Soil Bureau and later Landcare Research, he remains passionate about soil and the importance and value of a healthy soil fauna, especially earthworms and nematodes. Alison Ballance visited him in his Palmerston North garden to meet some of his favourite soil critters, and to hear about how his research helped New Zealand's agricultural and horticultural industries. Alison's favourite statistic from the day: that the weight of nematodes in the soil of an average New Zealand paddock is greater than the weight of livestock that grazes that paddock (and that's not any of the other soil fauna - that's just the nematodes!). 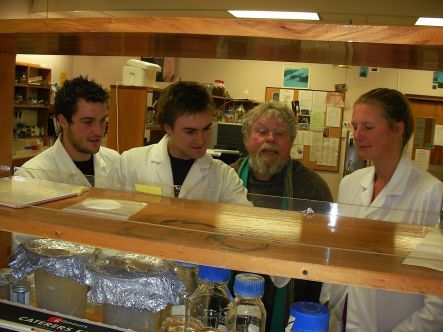 In New Zealand over 43,000 people have dementia, and the most common cause of dementia is Alzheimer’s disease. University of Otago’s Warren Tate has found that a small protein fragment called secreted amyloid precursor protein alpha (or sAPPα) helps protect neurons in the human brain and could potentially be used as a therapeutic to treat Alzheimer's disease in the future. The protein has been shown to enhance memory mechanisms in animals, restore lost memory to them, and can even stimulate the birth of new nerve cells.

Ruth Beran visits Warren Tate and members of his lab, including Katie Bourne, an Assistant Research Fellow who works with human cells to produce the protein in culture, and then processes it from the culture media and purifies it.  Masters student Simon Mckenzie explains how he is trying to identify the cell receptor for the brain protein, which is currently unknown. He is using the protein with a tag on it as “bait” to try and work out which receptor (ie “the prey”) attaches to it. Masters student Gary Morris is carrying out studies on how the protein affects genes and their expression in the mammalian brain.

Last year, Warren Tate won the Royal Society of New Zealand’s Rutherford medal and he will be touring the country in July presenting a series of Rutherford Lectures entitled How to Make Life from the Primordial Soup. For locations and times, click here. To listen to a previous interview with Warran Tate with Kim Hill, click here.