Our Changing World for Thursday 30 June 2011

Maungatautari ecological island in the South Waikato is an ambitious community-run forest restoration project, larger in size than Little Barrier Island. Maungatautari Mountain rises to about 900 metres, and is surrounded by farmland. A 47-kilometre long predator proof fence surrounds 3400 hectares of forest from which 12 species of introduced mammals have been removed. Mice have proved difficult to eradicate, but there are two smaller fenced areas within the main enclosure which are now totally mice free. To date seven forest bird species have been reintroduced to the sanctuary: the western form of North Island brown kiwi, hihi or stitchbird, whitehead, takahe, yellow-crowned kakariki, kaka and most recently North Island robins. Future introductions are planned, including Mahoenui giant weta, tuatara, kokako and geckos. In time, the forest could be home for 30 or so forest bird species, as well as a full suite of reptiles and invertebrates.

Biodiversity manager Chris Smuts-Kennedy, kiwi ranger Mark Lammas and kiwi dog Bella took Alison Ballance into the sanctuary to introduce her to the forest and its birds, and on the way a young kiwi was caught for a transmitter change.

The politics of Maungatautari have been in the news recently due to a very public disagreement over governance of the Maungatautari Ecological Island Trust. At Our Changing World we sincerely hope that, whatever the political outcome, the integrity of the predator-proof fence can be maintained. Millions of dollars and many thousands of volunteer hours have been spent over the last ten years to eradicate pests and fulfil the ambitious ecological vision for the sanctuary - it would be a tragedy if the security of the fence was compromised, allowing animal pests to reinvade.

Mark Lammas holding a young North Island brown kiwi, and the predator-proof fence seen at the entrance to the southern enclosure. The fence is key to the success of the sanctuary (images: A. Ballance) 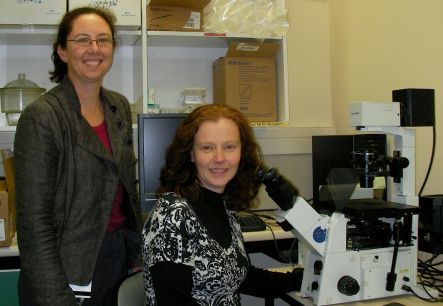 Affecting about 8000 people in New Zealand, Parkinson’s disease is a debilitating neurodegenerative condition which results in profound changes in single cell activity in the basal ganglia nuclei. It has been assumed that these changes are then passed to the motor thalamus, and on to the motor cortex.

However, previous studies conducted by Louise-Parr Brownlie (above left) from the University of Otago do not support this assumption. So in conjunction with Stephanie Hughes (above right), she is using light pulses on manipulated cells to study a model of Parkinson’s disease to learn how this alters motor thalamus and motor cortex activity, and behaviour. Their work is funded by the Neurological Foundation of New Zealand, Maurice and Phyllis Paykel Trust, Otago School of Medical Sciences Dean's Bequest Fund, and the University of Otago Research Grant.

As Ruth Beran discovers, their work may lead to better treatments for the condition, including a potential alternative to deep brain stimulation which uses light instead of electrical pulses.

For more information about brain research, the Neurological Foundation of New Zealand is holding public lectures round the country during the week of its annual appeal from 3 to 9 July. Click here for details.

James Crowley with one of his students, Jamie Lewis, and in the lab with Matthew Cowan, James Wright and Synove Scott, from left to right. (images: V. Meduna)

Most biological processes rely in some way on tiny molecular machines, often consisting of protein molecules, that can turn chemical energy into motion. The actin/myosin complex is an example of such a structure, without which we could neither walk nor talk. In terms of energy efficiency, these types of biological motors can be superior to currently available man-made machines and chemists have been trying to manufacture synthetic nano-scale analogues that mimic natural processes.

Some of the most successful attempts so far have included structures that have been built from the bottom up, using interlocked architecture, much like a magician's rings or keys on a key ring. One example are the molecular 'train sets' developed by Sir Fraser Stoddart's group at Northwestern University in Chicago. However, these structures are often difficult and expensive to make and have a limited lifetime. At the University of Otago, James Crowley is using a different approach, based on a chemical process called palladium-catalysed cross coupling, which won the 2010 Nobel Prize in Chemistry.