Our Changing World for Thursday 14 July 2011 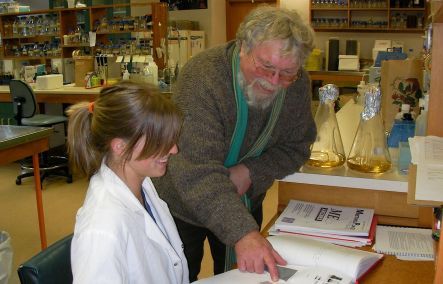 Following on from last week’s story, Ruth Beran goes back to the University of Otago to speak with Warren Tate (above right) about his research into HIV-1, a 20-year process which started with the chance discovery of a vulnerable mechanism in a bacterial gene.

Working with Tony Cardno, a hundred thousand compounds are being tested using a cell-based assay at the Walter and Eliza Research Institute's high throughput chemical screening facility in Melbourne. Lead compounds have been selected that inhibit a step in HIV-1 biology in the cell culture mode and the most promising of these are being improved and then tested against live HIV-1 virus infections at the McFarlane Burnet Institute in Melbourne.

Working with Eiren Sweetman (above left), Warren Tate is also establishing a clinical sample bank in New Zealand for chronic fatigue syndrome (or ME/CFS), as well as trying to develop diagnostic biomarkers. The cause of ME/CFS is not yet known, but there have been various viruses implicated, with the latest virus to be associated with ME/CFS being a retrovirus similar to HIV-1. Warren Tate also has a personal interest in creating a research base for ME/CFS as his daughter suffers from the disease.

Last year, Warren Tate won the Royal Society on New Zealands’s Rutherford medal and he will be touring the country in July presenting a series of Rutherford Lectures entitled How to Make Life from the Primordial Soup. For locations and times, click here. To listen to a previous interview with Warran Tate with Kim Hill, click here. 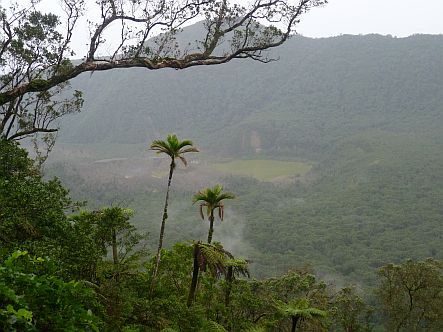 View of the crater on Raoul island, from high on the Denham Bay track (image: A. Ballance)

Raoul Island is the largest and northern-most of the Kermadec Islands. It is the above water part of a large, underwater caldera, and has an active volcanic crater. Alison Ballance joins Department of Conservation threatened plant specialist Peter de Lange for a walk on the track to Denham Bay, high above the crater lakes, to find out about the island’s native plants, where they have come from and how they coped with many years of goat browsing and seed predation by rats. 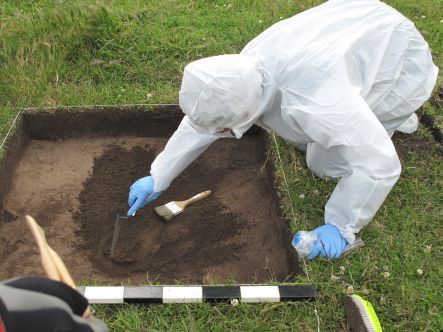 Lisa Matisoo-Smith is removing human remains on Isla Mocha, off the Chilean coast, dressed in protective clothing to prevent contaminating the ancient DNA in the bones.

Anthropologists have known for some time that Polynesian navigators have crossed the Pacific ocean to reach the west coast of America. The kumara is just one piece of evidence that an exchange between the two cultures has taken place. The intriguing question was when it happened.

Lisa Matisoo-Smith, a biological anthropologist at the University of Otago, has focused her research on the settlement of the Pacific, the last major voyage of expansion that began around 3300 years ago. She used commensal animals – chickens, dogs and pigs – and the Pacific rat or kiore, all of which could only travel across the ocean with people, as proxies to track human migration.

Recently, her team’s analysis of chicken bones (pdf)  that had been unearthed on the coast of Chile showed that the DNA resembled that of a fowl species native to Polynesia, and that the birds had reached America more than a century before Columbus. Now, the discovery of human remains with distinctly Polynesian characteristics in a South American museum has provided a new focus for her research. Her team is using the museum collection as well as human bones excavated from Isla Mocha, an island 30km off the Chilean coast, to extract ancient DNA and to test whether it contains genetic markers specific to Polynesians. If it does, the analysis, combined with dating techniques, will show when Polynesians made landfall in America.

Alison Ballance was at the NZ Marine Sciences Society annual conference on Stewart Island last week, and took the opportunity to talk with Trudi Webster and Will Rayment, both from the Marine Science Department at the University of Otago. Will and Trudi are just about to head south on the research vessel Polaris to subantarctic Auckland Island to study southern right whales for the next few weeks.

Will (PDF) is creating a database of photos of southern right whales, which can be used to individually identify whales. From this he is able to begin to understand aspects of whale biology, such as how often they breed, and to begin to estimate the current population of southern right whales, which were hunted nearly to extinction in the late 1800s.

Trudi is using a hydrophone array to collect whale calls, and work out who is making them and in what context.