The Cost of a Coffee 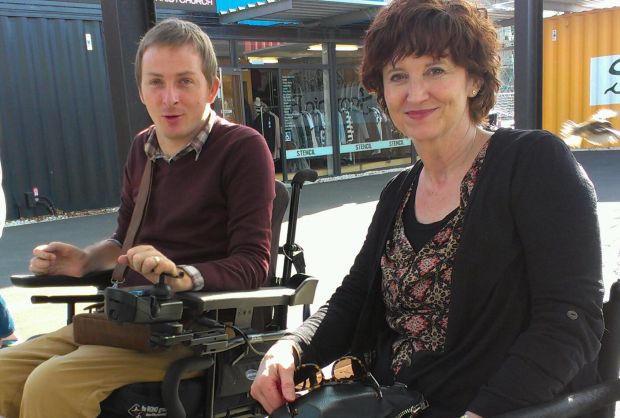 "Let's grab a coffee in town." On the face of it, that sounds like an effortless way to meet a friend.

For Marie, a wheelchair user who lives in Christchurch, it's not so easy. "When someone invites me somewhere, [...] I don't think about, 'do I want to go?' I think about 'can I go?'."

Marie drives her own car but often finds it hard to get a park. That's because she needs a wide parking space that allows a mechanised system in the boot of her car to pull the wheelchair back into the vehicle from the driver's door. Other limiting factors can involve the lack of curb cuts, lowered areas that enable a wheel chair user to cross roads.

Stowing her wheelchair in the car boot with the retractable arm

Marie works in the city and also attends many concerts around Christchurch but damaged footpaths, obstacles and inaccessible buildings mean some areas in the inner city remain off limits if she is on her own. "Parts of the city I've just stayed away from completely. There was just too much disruption."

Using a manual wheelchair brings particular challenges as her wheels can get stuck in paving stones or troughs and going too fast can result in her falling out. Other forms of paving can be jarring and cause her feet to slip off the foot plates of her chair. "There just doesn't seem to be much thought as to how people need to access public areas."

Marie admits she seldom thought about these issues before she needed a wheelchair and says planning for people with disabilities often seems to be an "afterthought". "Suddenly they think 'We might have to make room for people in wheelchairs or disabled people' and then it's done after the event, rather than forward planning."

The Legacy of the Earthquakes

Marie is one of 13 research participants in a doctorate being undertaken by Johnny Bourke at the University of Canterbury. He is examining the barriers that people in wheelchairs face several years after the Canterbury earthquakes. Mr Bourke said there was data documenting the experiences of people with disabilities during and immediately after natural disasters.

But he found very little literature looking at the long-term effects of such an event on the disability community. Mr Bourke said a number of patterns had already emerged with participants citing the importance of friends and family in helping them feel involved in the community. But he said community inclusion also takes energy and many interviewees said everyday tasks could prove exhausting. "How much planning and time can go into just doing what most people would consider to be quite run-of the-mill activities such as finding a park, [...] or just accessing a hairdresser or meeting friends for a coffee."

He said prior to the earthquakes people using wheelchairs already expended a high level of energy but, since the quakes, they were facing new barriers that required even more effort to overcome. He also found that the effort expended often went unrewarded with people in wheelchairs getting stuck in the middle of a journey. "Sometimes you'll be going down a path and you'll get to the end and there's no curb cut or you'll get into a building and there's a couple of steps onto the next level." 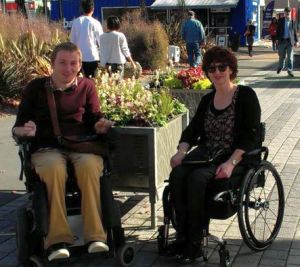 Mr Bourke said, prior to using a wheelchair, he himself had little insight into the kind of infrastructure that is needed. And the research revealed an ironic situation whereby the fact that some environments excluded the disabled community meant that the developers were unaware of how many people with disabilities would like to access a particular area. Mr Bourke said the research also showed the link between feeling included in the community and personal well-being. "If you have to stay outside of a shop or [...] a building while your family goes into the building it doesn't feel that great."

He said good accessibility could also mean that people in wheelchairs felt less conspicuous. Mr Bourke's doctorate is being supervised by the School of Health Sciences at the University's College of Education. The next phase of his research will involve a further survey of participants and he hopes his work will ultimately influence local and central government policy on accessibility.