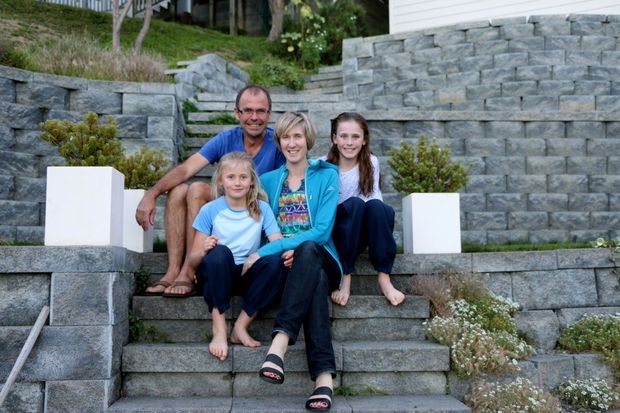 Bruce with his wife Helen and daughters Anna and Caitlin. Photo: Image supplied.

There is nothing like having the sun on your face or the wind whipping through your hair as you take to the pavement on a morning or evening run. There's a kind of elation once you push past the burning in your legs, and you feel the intensity of your entire body moving.

Now your muscles are alive and awake and your legs move in sync to the rhythm of your breathing—in this moment, you are at one with yourself.

This is the feeling that 53-year-old Bruce Bassett loves.

The Hataitai family man has run 30 half-marathons and last year competed in his first full marathon. He is also an avid cyclist who has cycled to work for many years, travelling from Hataitai to the inner city. 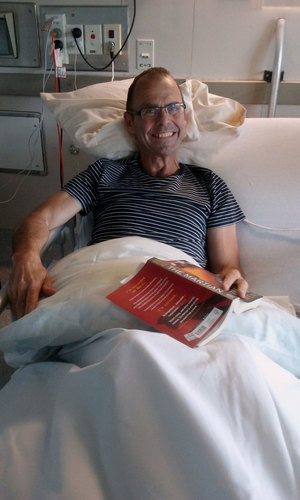 Even in hospital Bruce was determined to think positively. Photo: Image courtesy of the Bassett family

At 5:50pm Bruce was heading home on his bike, due to collect his two daughters from their sporting activities shortly after. He was only meters away from his family home when a car door swung open; in order to avoid a potential accident he swerved too wide onto the road and proceeded to hurtle into an on-coming car.

“I somehow got tangled up with a car. I got airlifted to Christchurch for surgery the next morning [and] it was quite apparent that I had suffered spinal damage [which] was looking like a pretty permanent state of affairs. I was in an immense amount of pain. The injury I incurred was a vertebrae break, but I also broke a lot of ribs and shoulder blades [so] the mere exercise of breathing was quite painful. “

Bassett doesn’t recall anything from the event, only referring to the details outlined in the police report for any kind of clarity on the situation.

Immediately after the accident he was taken to Wellington hospital and the next morning airlifted to the Christchurch for surgery, followed by three months at the Burwood Spinal Unit in a programme that he says is all about assisting patients to gain independence.

Now, almost five months on from that life-changing accident, Bassett is back in Wellington, although not fully reunited with his wife and two children due to the complex layout of their family home.

For now, he is based in a central city Wellington apartment, while coming to grips with the most immediate obstacle at hand—his own body. While activities like getting dressed used to be taken for granted, now it is the first challenge each and every morning.

“It‘s not a careful exercise to get yourself ready for the day [because] your legs are part of you, but they don’t necessarily feel like they’re part of you. For instance, when you want to pull up your trousers the toes don’t point neatly down the trouser leg.”

From the outset, Bassett has continued to remain optimistic and despite the paralysis, he is determined to think positively and make the best of the situation. But that hasn't been without distress.

“What your mind does is reconcile the old new with the new you and kind of likes the old you better [because] there are a lot of the things that I did, and identified myself with that I won’t be able to do in the future."

"I sort of oscillated between optimistic and bullish about things to also being quite despairing about how different things were going to be [and I ] felt diminished by major parts of my body that weren’t going to work anymore.” 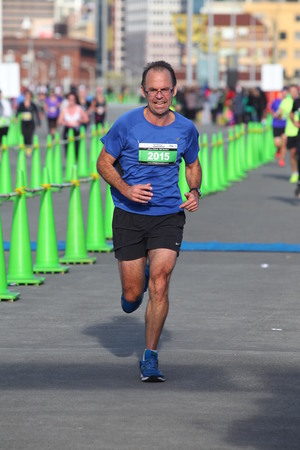 Before the accident Bruce ran a full marathon and says he'll miss his former self. Photo: Image supplied.

“Every time you remember and think about the fact that its forever, it actually feels like you’re being punched—a very weird physical sensation [so there is] a lot of disbelief [and] just that realisation that this is forever, and coming to grips with what that means.”

Bassett has recently returned to work on a part-time basis in a job that he loves and says it helps to rebuild part of himself and his identity that would otherwise be lost.

Next on his list-of-things-to-do will be a return to physical activities and cardio exercise that won't require the use of his legs.

But ultimately the upside of tragedy is that Bassett can still see a future for himself and his family—it's just a different kind.

"I’m so lucky [to] have wonderful family as support—it’s given me strength and confidence to push through [and] going through this journey [your] mood swings quite a lot. There are some tough times [but] when you think that it’s not going to get better, it actually does.”