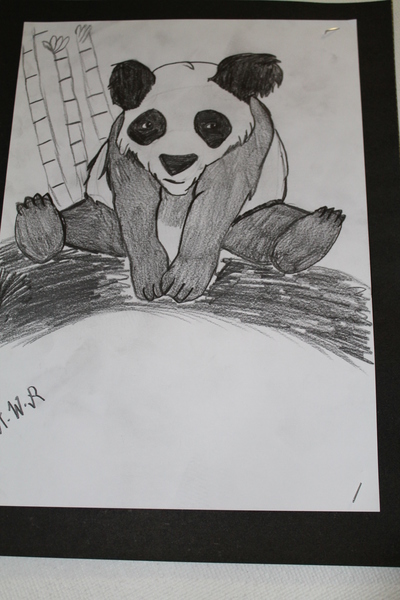 Listening to questions from students 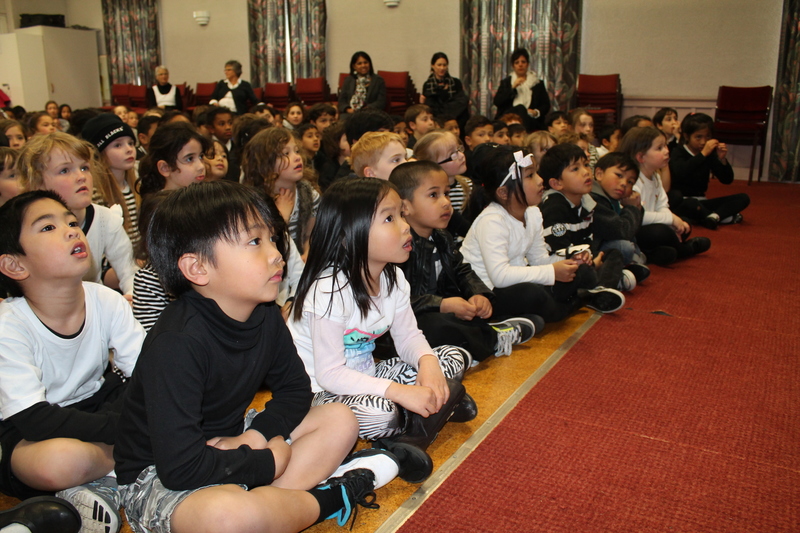 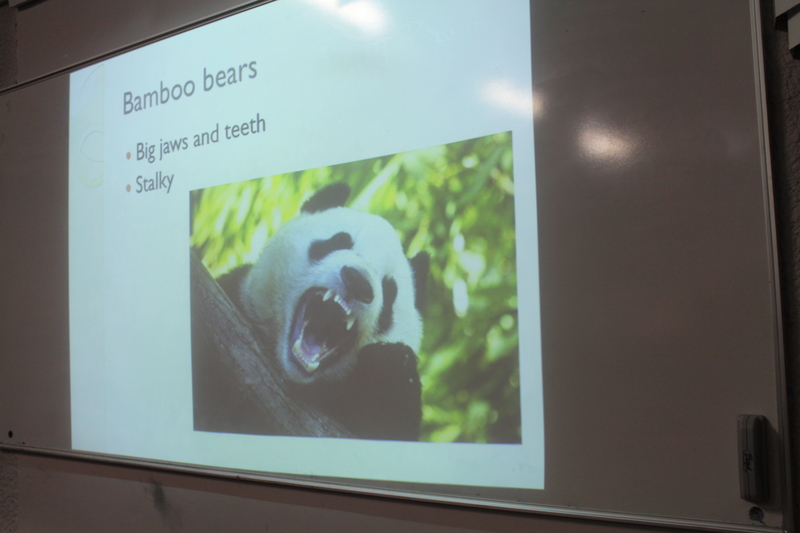 Not cuddly! Mean and cranky. 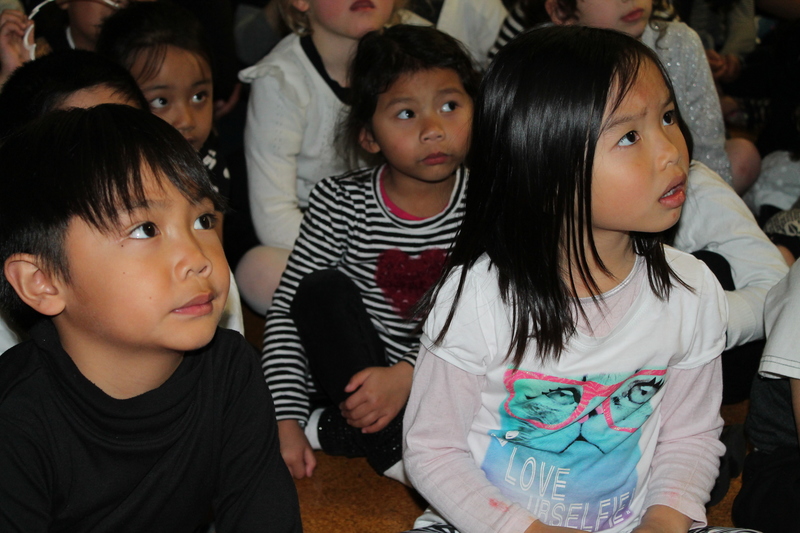 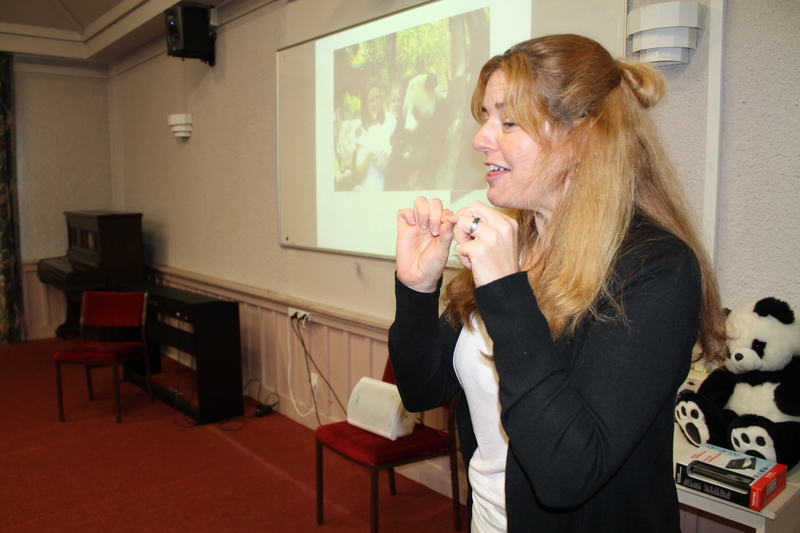 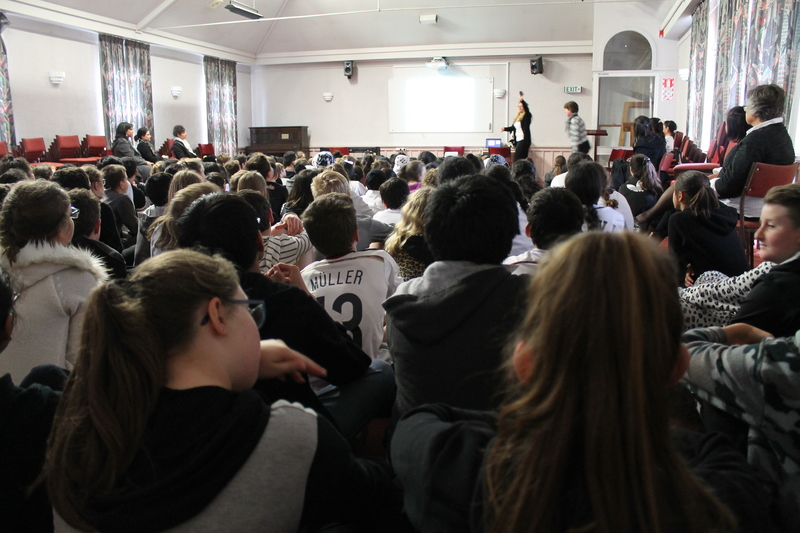 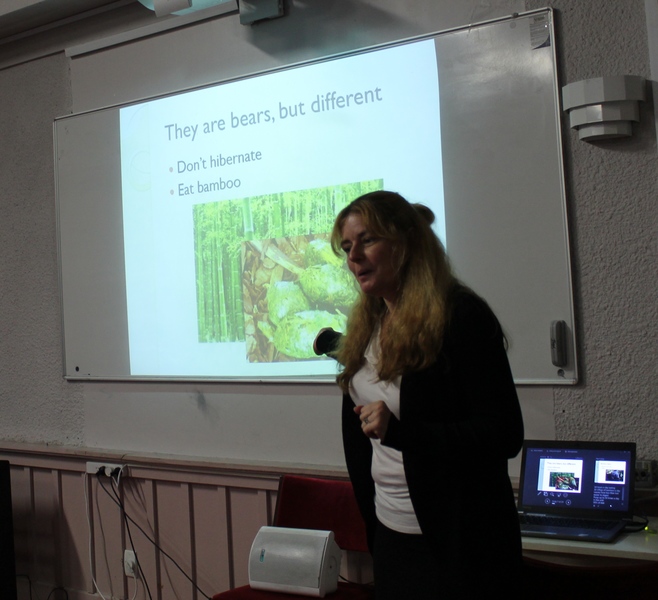 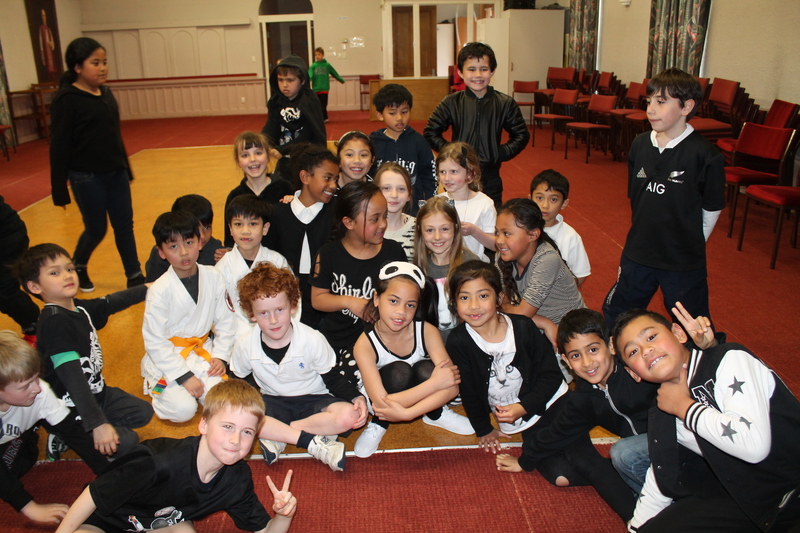 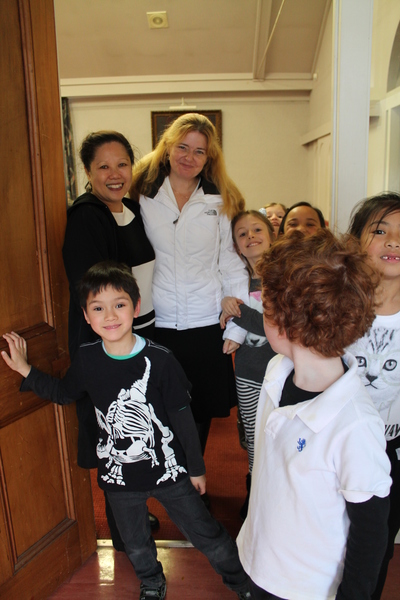 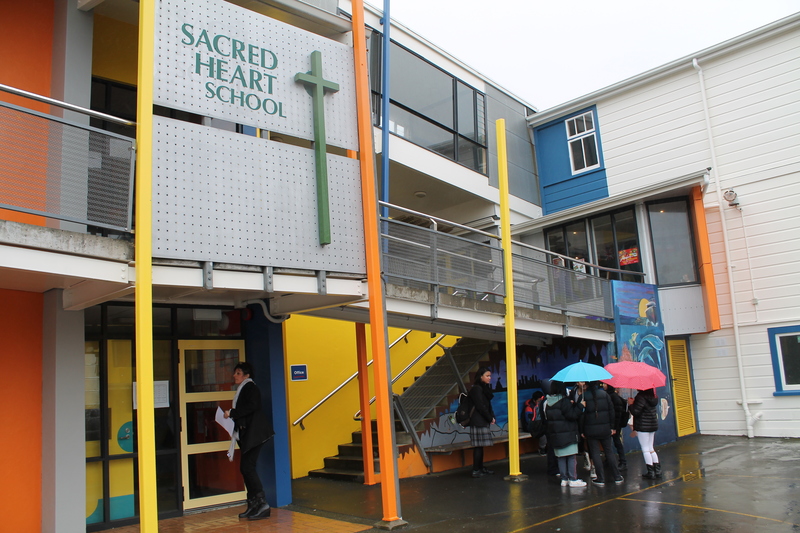 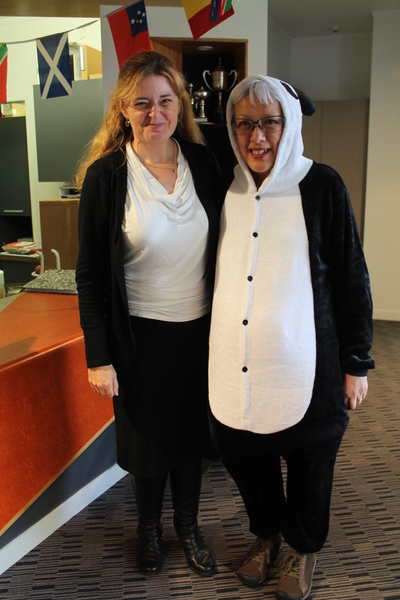 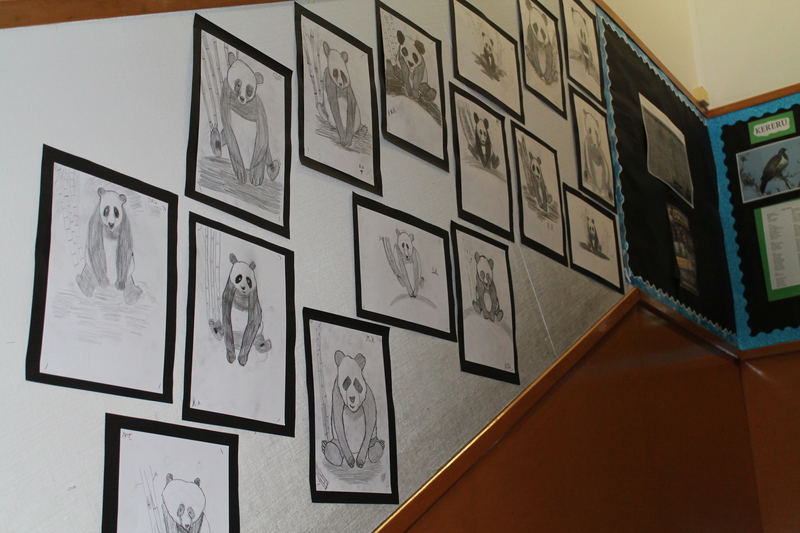 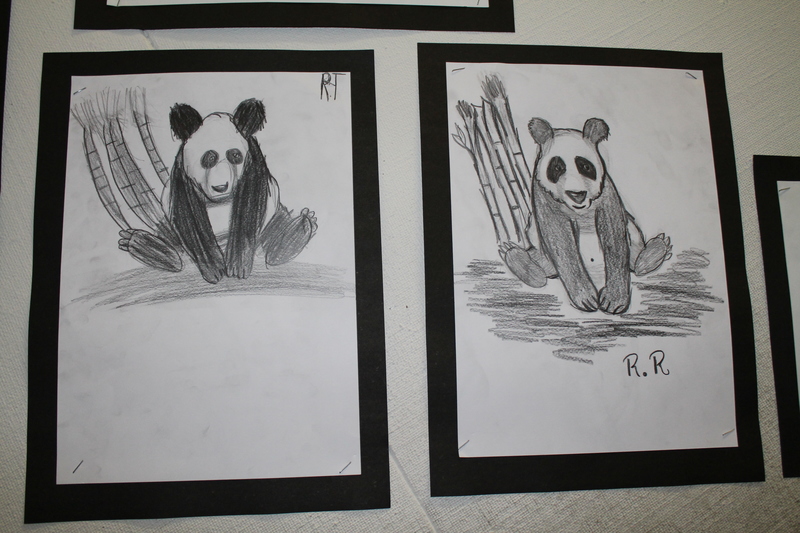 Are pandas soft and cuddly? They might look cute but  they are mean and cranky! - Dr Edy MacDonald, on the personality of the Giant Panda

At Sacred Heart Cathedral School in Thorndon, Wellington the children are celebrating their "Big Panda Day" by dressing in black and white. The school's Administration Manager Cathy Lee is all dressed up too, in fact her complete Panda outfit could easily have won best costume for the day.

Panda's "Big Day" at Sacred Heart Cathedral School in Wellington saw international panda expert Dr Edith MacDonald visiting to talk to all the primary aged students about the breeding of the giant panda for the wild and whether Wellington Zoo could viably support giant panda bears.

It was part of a  series of public talks across the country educating the young and old about conservation not just in China, but here in our own country too, titled: Confucius, Nature and Pandas - Tame nature, wild people - wildlife research for a peopled planet.

The students were very eager to learn about China’s cutest symbol of conservation and Edy's presentation was captivating and entertaining. There were lots of "ooss and ahhs!" from the excited children and plenty of giggling when it came to subjects like panda poo, panda mating rituals and general panda antics.

Born and raised in California Dr Edy MacDonald was a research fellow on the Giant Panda Team at the San Diego Zoo, the first zoo outside of China to successfully breed pandas. her research interests and expertise are interdisciplinary, ranging from organismal biology, chemical ecology, behavioural endocrinolgy to  to conservation psychology and science communication.

She’s worked across the globe, especially in China to address conservation issues in large mammals such as the panda, white rhinoceros and elephant. She met her future husband while at San Diego Zoo, a New Zealander, through their joint research on rhinos. They’ve been based in Wellington for the last decade where Edy has focussed on the human dimension to wildlife conservation, including the implementation of the citizen science programme “Bush Builders” at Wellington Zoo, which was awarded DOC's Wellington Conservancy 2008 Advocay Award.

Now working for Te Papa Tongarewa, Museum of New Zealand, Edy is educating the public on how China’s conservation efforts can relate to our own.

The Confucius Institute at Victoria University are behind Edy’s  public talks, Director Wen Powles says that Confucious himself was a great lover of nature. We muse over whether he was a lover of panda bears as well and how prolific the population may have been many hundreds of years ago in China. Wen tells me that China can certainly celebrate it's conservation success story regarding pandas - something that Edy backs up.

Edy tells me that China has managed to bring back the Giant Panda from near extinction and the reforestation of their areas of habitat has meant a steady increase of pandas being bred and introduced back into the wild. Edy tells me that New Zealand needs to follow suit, especially when it comes to our very own endangered species.

Some interesting facts about the Giant Panda (sourced from The National Zoo website).

The unmistakable black-and-white markings set the Giant panda apart from other bears, with black fur eye patches and ears and black muzzles, shoulders and legs. The rest of the panda's heavy coat is white, the thick fur keeping it warm for the cooler geography. It's not known why they have such unusual markings but some scientists speculate the bold coloring provides effective camouflage for the snow covered and rocky environment. Giant pandas have large molar teeth and strong jaw muscles for crushing tough bamboo.

The habitat of the Giant panda; they live in broadleaf and coniferous forests with plenty of bamboo, at around 5,000 to 10,000 feet above sea level. Giant pandas will be found in the mist-laden mountain ranges of the Gansu provinces, Sichuan and Shaanxi in central China. They once populated lowland areas until farming and forest clearing restricted them to the mountains.

A giant panda’s digestive system is more similar to that of a carnivore than an herbivore, and so much of what is eaten is passed as waste. To make up for the inefficient digestion, a panda needs to consume a comparatively large amount of food—from 20 to 40 pounds of bamboo each day—to get all its nutrients. To obtain this much food means that a panda must spend 10 to 16 hours a day foraging and eating. The rest of its time is spent mostly sleeping and resting.

About the size of an American black bear, giant pandas stand between two and three feet tall at the shoulder (on all four legs), and reach four to six feet long. Males are larger than females, weighing up to 250 pounds in the wild. Females rarely reach 220 pounds.

The large fully grown pandas may look cute but they're as dangerous as any other bear.

Scientists aren't sure how long giant pandas live in the wild, but they are sure it's shorter than lifespans in zoos. Chinese scientists have reported zoo pandas as old as 35. The National Zoo's Hsing-Hsing died at age 28 in 1999.

The giant panda is listed as endangered in the World Conservation Union's (IUCN's) Red List of Threatened Species. There are about 1,600 left in the wild. More than 300 pandas live in zoos and breeding centers around the world, mostly in China.