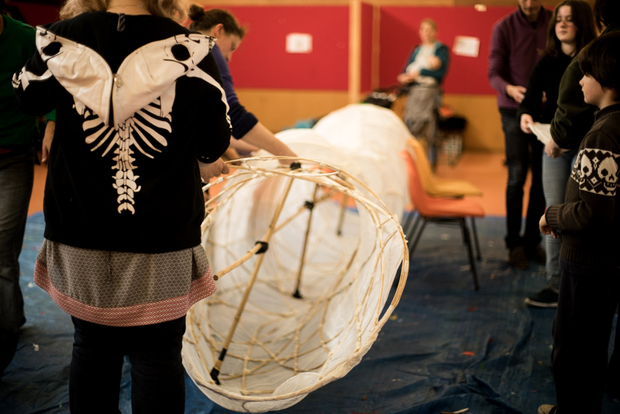 Puppets are more than simply child’s play, according to Jim Richards and Bridgette Murphy who work with community groups, schools and organisations around New Zealand.

They run under the banner of REACT: Rangawahia Environmental Arts Centre Trust, with an ethos based on sustainability and creativity. 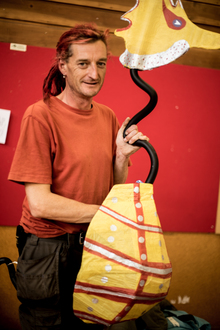 Jim Richards with a seahorse made from recycled cardboard and bicycle handlebars Photo: Sonia Sly

Willow forms one of the main components of their larger than life creations and the pair have become adept at thinking creatively with cardboard, tubing from old bicycle handles and even brewery tubing.

"We’ve been using brewery tubing for a long time. They clean it every year or two [but] then they have to start all over again, so a massive amount goes into the waste stream every year,” says Bridgette.

According to Jim, the process is also about finding things that are either cheap or free: “The survival of the creativity has always come from that, but it’s respect for the planet really…”

But while working with waste addresses one issue, there are a range of other profound benefits that can be found through the process of creating and parading these large structures.

Jim has travelled to the Balkans and Afghanistan to work with children suffering from trauma, and says that the United Nations have been looking at the benefits around creative processes such as this.

“It’s the idea of it being bigger than yourself [and] the fact that the kids don’t think that they can make something that large; the idea that you can make something in a day, the ownership—they imbue all their wants and desires in it— [and] the characterisation of the puppet has something of themselves in it.”

Participants find a way of bringing meaning to the puppets, while group work and being involved in the decision-making process also fosters community bonds and self-confidence. 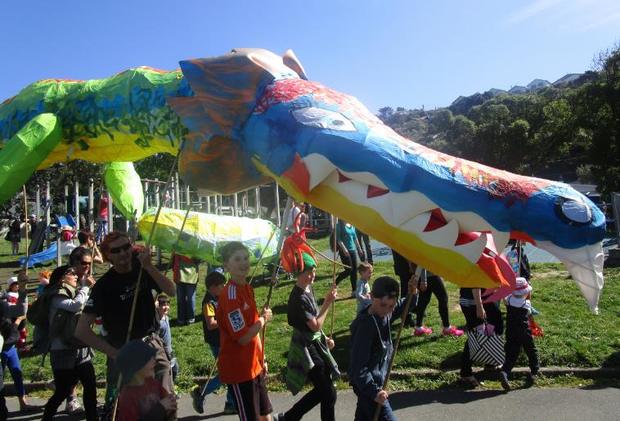 Jim learnt his craft in the UK  through Emergency Exit Art: a company renowned for producing creative specialists in site-specific and touring works, before furthering his skills via workshops with Rise Pheonix—an international touring not-for-profit organisation.

Bridgette worked across a variety of large-scale international events before working with 'puppets as protest', and says that puppets are vital to those communities and individuals who have experienced oppression.

“I think puppets have always had a reputation for subversion [and] they’ve been used as satire in communities—communities that have been downtrodden by the oppressor or  colonialism—that’s where a lot of street carnival and a lot of street demonstration has come from.”

Find out more about REACT.