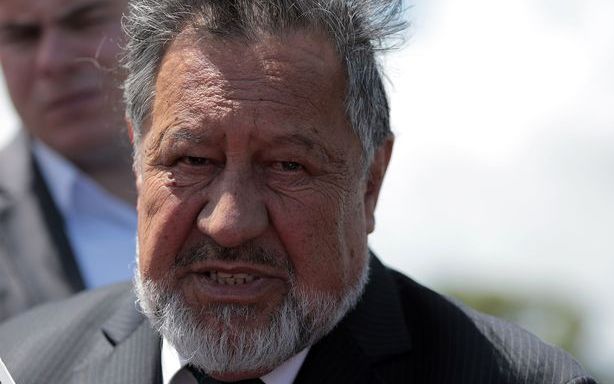 Dawn, September 10, 1984. Outside the Metropolitan Museum of Art in New York nearly 100 New Zealanders are waiting. They're there to celebrate the opening of Te Māori exhibition. As the sun rises, a karanga rings out along 84th Street and 5th Avenue. Sir Pita Sharples recalls the opening

Who are these people who come and pray in the dark, and talk to pieces of wood, and say prayers that stop the rain?

Pita Sharples was 43 years old, a cultural leader living in West Auckland and part of the large New Zealand group flown in for the opening of Te Māori.

'When the karanga began, we'd been up for hours preparing.Two of us were the manutaki and we led the procession in with out taiahas. It was really exciting.'

10 years of work had led up to this landmark exhibition of Māori art, opening at what co-curator Sir Hirini Moko Mead called ‘the centre of the world of art.’ The New Zealand party contained representatives from most of the country’s iwi. But not all were there. Some iwi had not consented to their taonga traveling offshore.

'The opposition to it going was the fact that these are artifact forms of living people. So they carry the mana of that whakapapa and that tribe...but of course we go and we are the living taonga if you like, so I didn't see a difference.'

This was the first time New Zealand had been on the front page of the New York Times since Hillary climbed Everest.

The Māori presence in Manhattan had caused quite a stir within the local media. The New York Times wrote that 'the Māori rituals added some meaning to the sculptures in the exhibition and not just for the Māoris. Gasps of wonder and surprise and not a few teary eyes were seen in the exhibition hall when the warriors dance and the elders spoke.'

Television and radio coverage of the respect shown to these works by the New York audience greatly affected many watching and listening back home in New Zealand. When the exhibition returned in 1987 Pita Sharples recalls having mixed emotions.

The welcome back of these taonga to New Zealand was so big,every museum wanted (them)...I thought "why? It's been here all this time!"

'We take it to America and make it famous in your eyes and now that it is famous, you want to welcome it. Where were you guys yesterday? This has been around!'

Nevertheless, Sir Pita is certain that the sea change that occurred between 1984 and 1987 has remained and improved the nation. And given the chance, Pita Sharples would do it all again and looks forward to a time when Te Māori or a similar exhibition travels to museums in Europe and elsewhere.

'Some of the younger ones who were involved at that time like myself are still around, so I think there is every possibility of doing something else. This is a time when globalisation is almost out of hand, and you are part of a global culture.'

So I think it is even more important that we do something at this time to reinforce the mana of Māori history and the taonga, both living and physical, that carry this history and carry the hopes of the future.