If There's Not Dancing At The Revolution, I'm Not Coming 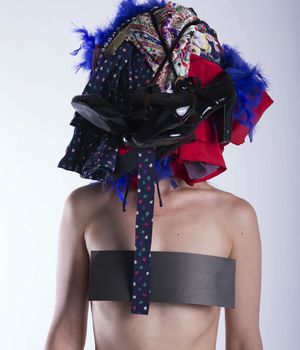 If There's Not Dancing At The Revolution, I'm Not Coming. Photo: Julia Croft

Performer Julia Croft wants a revolution but only if it has dancing. This Auckland actor and writer is mashing up Emma Goldman, Nicki Minaj and Laura Mulvey in a one-woman show overflowing with feminism, film, fun, confetti cannons - and critiques of media stereotypes of women's bodies.

She shows Justin Gregory around her rehearsal room and explains why for her, more is more.

It's dealing with some pretty heady themes but essentially it's a party, it's a poem, it's anarchic - and it's fun.

If There's Not Dancing...evolved from a series of scratch night performances while Julia was studying in New York and the collage style mixes, melds and explodes tropes from film, music, media, dance and theatre – with lots of costume changes. Imagine a performance that plays a John Mayer pop song over the shower scene from Psycho and you’ll get where Julia is going. But while the performance style is fun, the subject matter is serious. The show is informed by the theories of Third Wave feminism and Julia wants to challenge popular culture's presentation of women’s bodies.

"Advertising, pop songs and film - they invite us to look at a woman's body in a certain way...(they are) to be looked at and to be enjoyed and treated as spectacle."

"Putting yourself onstage to be looked at is kind of objectifying yourself. So it's a really delicate balance I find in empowering the audience to look in certain ways." This performance is not a lecture, so don’t be concerned about possibly being bored. Obviously Julia wants you to listen and engage with the ideas she’s there to talk about. But she also wants you to enjoy the music and the spectacle and to have a whale of a time.

'It is enjoyable to make a spectacle of yourself..this show is is ridiculous and hilarious. But at the same time I'm trying to remind people that to look is a political act.'

A self-described "maximalist", Julia can't help herself when it comes to layering on the props, the costume changes, the loud music - and the confetti cannons.

"It's going to be a hoot. We're trying to create a one-woman stadium rock concert."