New work by pacific artists is on display right now in a series of pop-up exhibitions in Auckland. The series hopes to literally show both the artists and their work in a different context than before and so they have broken out of the gallery and set up in a barber shop and tattoo studio. Justin Gregory went along to Big Willy Legacy Barber and Tattoo Studio to take in the art and see how the patrons are enjoying it.

I think Pacific art lies in the people. We're not all about pretty flowers, bright colours, or lavalavas. We do have something to say. We do have a history, hopes and dreams.

Hanging proudly on the walls of Big Willy's are works from the successful first exhibition of the PIMPI Winter Series. Featuring artists Talufangi Finau, Sione Manu, Siliga David Sitonga and Daisy Tavilione, the show is called U Can't Touch This and is about to be replaced by the second in the series. Called That's Not Pacific Art, this is a show intended to provoke comment. Curator Ema Tavola says it comes from the question about who gets to decide what is and what is not pacific art and was prompted by the perceptions of her mostly Polynesian art students. 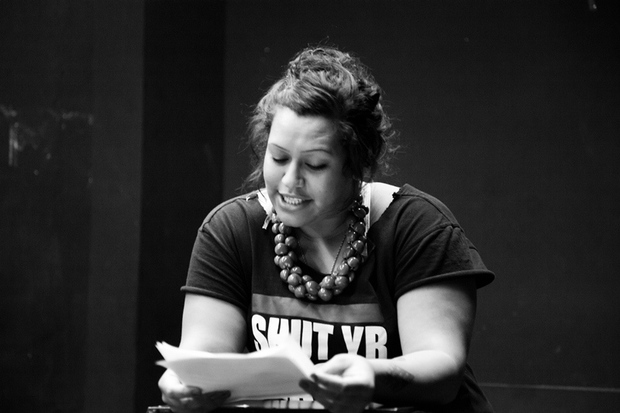 Ema believes that those judgements come from both inside and outside the pacific community and are based on an outdated notion of what pacific art should look like. Stan Lolohea, owner of Big Willy Tattoo Legacy Barber and Tattoo studio and an art historian, agrees. Stan says modern pacific art was created out of the experience of diaspora and was built upon a sense of nostalgia and a longing for home. He argues that with this current generation of pacific artists, almost all of whom were born in New Zealand, that sense has changed. 'Their experience is different. How they perceive pacific art, how they practice it and how they see themselves is quite different from someone who has been practicing since the 80's.'

Ema Tavola points to a work by artist Genevieve Pini which she calls the 'nucleus' of the exhibition. Called Samoa Mo Samoa, the work is a photograph of a tag on an Otara shop wall shop wall and references the Mau Movement of pre-independence Samoa.

It's a sentiment that comes from the heart; a connection to the past that fits into your everyday New Zealand reality.

The photo was taken in 2004, an important year for Genevieve. She was studying at art school and at the same time, receiving her malu, a traditional Samoan women's tattoo. Genevieve says it was a time of researching the history of her family and of her parent's homeland; of celebrating the journey of both her parents and of the nation of Samoa. To her, the tag seemed to encompass all these things.

I had  a sense of pride in knowing that there was another Samoan that knew their history, knew who they were and had a sense of understanding where they stood.

Genevieve Pini agrees that expectations of what pacific art should be comes from within the community as well as from society at large.

'People...think pacific art is all about tapa cloth, frangipani and bright colours'.

She feels happy to both confound those expectations and stand up to the forces that would keep her and the pacific arts community in a narrow cultural box.

But what about the customers at the tattoo studio? Are they able to appreciate the art on the walls around them as they flinch from the sting of the tattoo gun?

Jack, as he wants to be known, is getting a large and beautiful piece of work done on his shoulder by Stan. Is he appreciating the art?

'Are you taking in the art?'