Tokanui Cemetery – The paddock below the woolshed 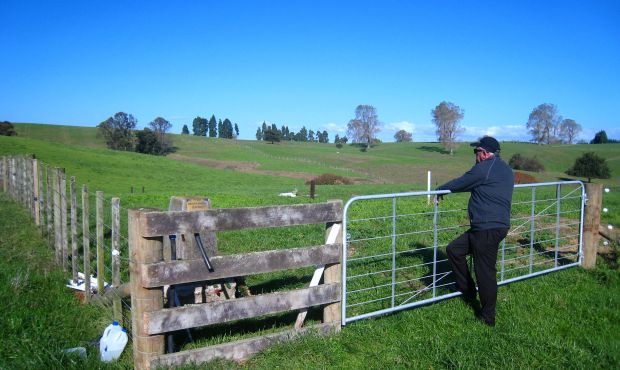 Maurie Zinsli looking into the cemetery

“I’m not doing it for me… I’m doing it for the poor people in this paddock. They deserve some kind of recognition.”

A year ago, Maurie Zinsli had never heard of, let alone set foot in, Tokanui Hospital Cemetery. He now makes the 40-minute journey from his Hamilton home to this forgotten South Waikato resting place on a regular basis.

Maurie’s great-aunt Maria Zinsli is buried here, in an unmarked grave, along with the bodies of more than 500 others who lived and died at Tokanui Psychiatric Hospital near Kihikihi.

Only a single concrete headstone marks the whereabouts of the graves today – an undignified end that has left Maurie horrified. “It’s sad you know. It’s all these people just thrown in a paddock. There’s no coffins, no dignity, no nothing… they got nothing!”

Left: The cemetery’s only visible headstone. Right: The two wreaths that were laid at the Cemetery on Anzac day 2015 by members of Te Awamutu RSA and Otorohanga. It was the first time such a service had ever been held to remember the First World War soldiers and other war veterans buried at Tokanui.

Now surrounded by an AgResearch farm, the only reminder for present-day visitors to this remote field is a concrete marker which bears a worn plaque with the words, "Tokanui Hospital Cemetery, 1914-1964. May the 500-plus people buried here Rest in Peace.” And Maurie Zinsli is determined that will happen. He's instigated a project to find and mark as many graves as possible in the cemetery, including his great-aunt’s, and erect a memorial wall honouring all those buried there.

About 460 graves have been identified so far, including those of around a dozen veterans from the First World War and the Boer War. A three-metre granite wall will be erected later this year, donated by James R Hill Funeral Directors. The names of all those positively identified will be etched into the granite and space will be left for more names to be added once they have been verified.

“My ambition for this, is once the wall is up is to try and start levelling the paddock out a bit. I want to put a headstone on every grave.” Maurie says he’s been overwhelmed by the generosity of local businesses, who have been donating their services to the project free of charge.

Firth Concrete from Te Awamutu has pledged to make pavers for the site, as well as the headstones. “It’s awesome,” Maurie says with a grin. “People coming out of the woodwork and offering help, it’s really humbling.” And this year, for the first time, a wreath-laying ceremony was held at the site on Anzac day. 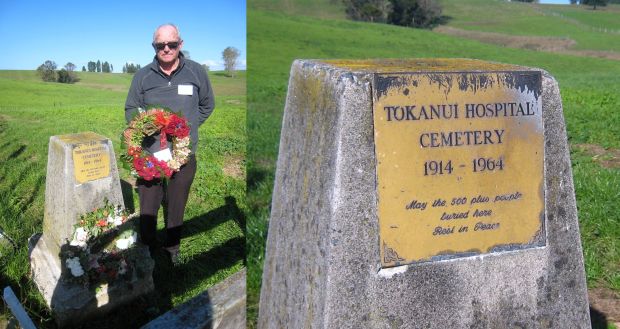 Left: Maurie Zinsli with the Anzac day wreaths. Right: The only reminder for present-day visitors to this remote field is this concrete marker.

While Maurie says the response in helping to try and identify those buried at Tokanui has been good, he’s calling for more people to come forward with information. Poor record-keeping from the time is hindering the project’s ability to identify any further burials. “These people buried here, every single solitary one has got a story and it would be awesome to figure out these stories,” he says.

“What we need is a lot more people that believe or know they have relatives buried here to get in touch with us and then we can chip away… all I want is for these people to get some recognition. That’s the aim of the game.”

Maurie has come to know what he can of his great-aunt through researching his family tree for his children. After discovering his grandfather had two sisters, Maurie set about finding out what had happened to them and discovered that Maria was buried in the former Tokanui Hospital Cemetery.

Maria came out to New Zealand in the 1860s from Switzerland with her fiancé Jacob. They settled in Taranaki where Jacob went farming and Maria took a job as a parlour maid in Patea. However, things took a terrible turn.

“He didn’t turn up for work one morning and they sent the boy down to his bach and found him dead,” says Maurie.  “He was 25 when he died from peritonitis.”

For Maria, Jacob’s death was heart-breaking. “This poor girl. She was 24, had lost the love of her life, is in a strange country, her brothers are around the other side of the mountain and she had no one.” 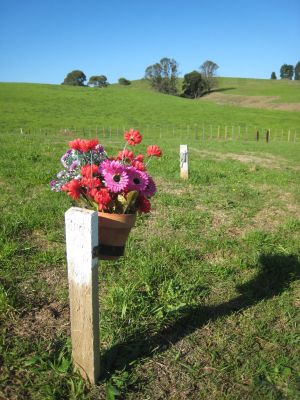 Maurie says she retreated to her room and started chanting and possibly praying. “Her employer decided that wasn’t good enough. He got the local doctor in who pronounced her insane… just like that.” Maria was first sent to Wellington and then Porirua, before being transferred to Tokanui.

In total, she spent 52 years in institutions. “What a waste of a life,” Maurie says with a shake of his head. “And there was no jolly need for it; she was no more nuts than anybody.  All because she’d lost the love of her life.”

While he may never know why his grandfather and father never spoke of Maria, Maurie believes the stain of having a family member in a psychiatric hospital stopped them from talking. “Back in the old days they were called lunatic asylums… never anything else and there was a stigma attached to that and once you put a person in here, the door was closed and that was it.”

Left: Maria Zinsli’s burial site. Once every grave has a headstone, Maurie says he’d like to provide some artificial flowers as he has done for his great-aunt’s plot.

If you’d like to get in touch with Maurie Zinsli about the project, you can email him via mezizzle@clear.net.nz  or mezizzle1@hotmail.com