“It’s the closest I’ve ever got to winning an Oscar!” - actor Paul Barrett on his Attitude Award win. 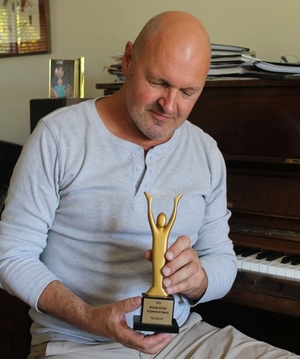 He’s had a successful professional acting career for 35-years despite suffering from Tourette's syndrome which burdens him with repetitive nervous twitches and tics. Paul Barrett has just won an Attitude Award, honouring people who’ve achieved, despite their disabilities.

When I visit at his home Paul Barrett sits down at his piano and sings. It’s his way of demonstrating how he can tame his Tourette's, reining in the involuntary twitches and tics.

As a youngster Paul was deeply involved in “am dram”… despite starting to exhibit some of the hall mark signs of Tourette's, which can range from repetitive eye blinking, head jerking and shoulder shrugging to obscene gesturing and swearing.

Paul says his Tourette's manifested itself as eye rolling, shoulder and jaw twitching which he says can be exhausting. When he acts he can now contain the tics, but he says he’s just been diagnosed with arthritis in the affected parts of his body.

Tourette's affects one in 1000 children in New Zealand, but only one-in-one-hundred have symptoms severe enough to be diagnosed. They mostly disappear in adulthood, but not for Paul Barrett.

The Attitude Awards are a joint initiative between the Attitude Awards Trust and Attitude Group which produces the TV One show Attitude. The winners of the Attitude Awards 2014  were announced at a glittering ceremony at the end of  last year with Paralympic gold medal swimmer Mary Fisher taking the supreme award. Paul Barrett took his award for artistic achievement. He says it was like getting an Oscar.

Paul has co-authored and appeared in his own one man show about living with Tourette's. It’s called “Tic Tic”.

This year you will see Paul Barrett in the Buddy Holly musical, where he both acts and plays keyboard… and later in the year he’s doing the musical classic South Pacific.