"My first impression of New Zealand when the ship was coming in, I see all these houses on the hill, you know, with red rooves and I thought 'Oh, they must be all communists here.' That's children for you."

"Paradise." That's how Kazimierz Zajac describes the New Zealand he found in 1944 when he and 733 other Polish children arrived in Wellington.

After the invasion of Poland, these children were displaced from their homes and many were left orphaned, suffering extreme hardship in Siberia before ending up in Isfahan in Iran. Eventually the group was evacuated and invited to live in New Zealand by the then prime minister, Peter Fraser.

Says Kazimierz Zajac: "I saw it as being a parcel and I was posted round here, there, everywhere and that's where I turned up: in New Zealand." He and the other refugees say they had no say in the decision and knew little of the country that would become their home. "It was a just a name. New Zealand was a name".

Seventy years after they arrived in this unknown country, a group of Polish refugees reflect on their lives in New Zealand.

The children and an accompanying group of Polish adults were taken to a camp in rural Pahiatua. Boys and girls were segregated except for mass and there were set meal and class times. But Josef Kubiak says, within that regime, there was a lot of freedom. "We could do what we liked [...] we just played football, balls and various hide and seek and things like that." 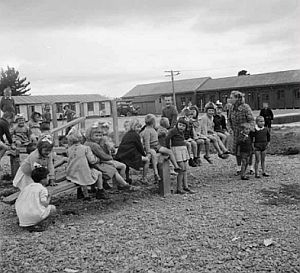 Henia Blackler says the sheer numbers of children meant no one got much individual attention. "If you were sad or something happened you didn't have Mum to kiss you goodnight when you went to bed. There was too many of us for the ladies to be sort of involved [...] or maternal."

But she says, compared with what the children were used to, it was clean and safe and she recalls this period as "happy times".

She says the first Christmas at the camp, the children were given money to buy themselves a gift and she and her friends spent theirs on high heeled shoes.

"We walked around the camp all night long until midnight and [...] we sang songs and by the time the mass was finished I barely could walk to the barrack and my ankles never looked the same after."

Jurek (George) Bojarski recalls trips into the nearby hills with his friends, catching fresh water crayfish from the creek and cooking them in an old tin can. "It was great fun, to us it was freedom."

"A Sense of Normality"

The children were often billeted with New Zealand families during their holidays and they say this was when they gained their first sense of normality and the way locals lived.

Henia Blacker says she loved a trip to Carterton where she experienced farm life, helping to bring in cows.

As teenagers they were sent to private Catholic schools through New Zealand and, from there, many made their lives in the South Island.

Julie Mokrzycka says she initially struggled with the strict rules of her school but later joined the Sisters of Mercy and became a teaching nun and social worker, with a special interest in the Maori mission.

For Henia Blackler the move south introduced her to her future husband when her Barrowmans book-keeping machine broke down. "They sent this nice, handsome young man to come and fix it – a few days after, which was Saturday night, I went to the Latimer Hall dance and, lo and behold, here he was again."

Jurek (George) Bojarski says while he will always be Polish at heart, he is happy with the hand life has dealt him.

Josef Kubiak says the children arrived in New Zealand seventy years ago with nothing but have ended up living comfortably and are very grateful for what they have.

And they all say they now consider themselves New Zealanders.

Julie Mokrzycka says the group will always share a special bond and she remains grateful to God and to the people of New Zealand for giving them a place to live and a turangawaewae. "The camp was certainly that but we've learnt to love and accept what New Zealand has provided for us."

Archival audio in this programme was supplied by Ngā Taonga Sound & Vision.