The impact of a city eruption on Auckland

Professor Shane Cronin of Auckland University told Nine to Noon there was about a 2.5 percent chance of an eruption in New Zealand's largest city in any given 100-year period.

The cost would go beyond the physical damage, he said - it would also depend on how businesses recovered, and the resulting impact on employees and communities.

"It's not just the bricks and mortar. It's where do the workers come from, can they continue to operate if they can't get their supplies and their suppliers and the services that keep them going."

In the study, published in Bulletin of Volcanology, Prof Cronin and his co-authors looked at 7270 possible eruption sites across the region's volcanic field. 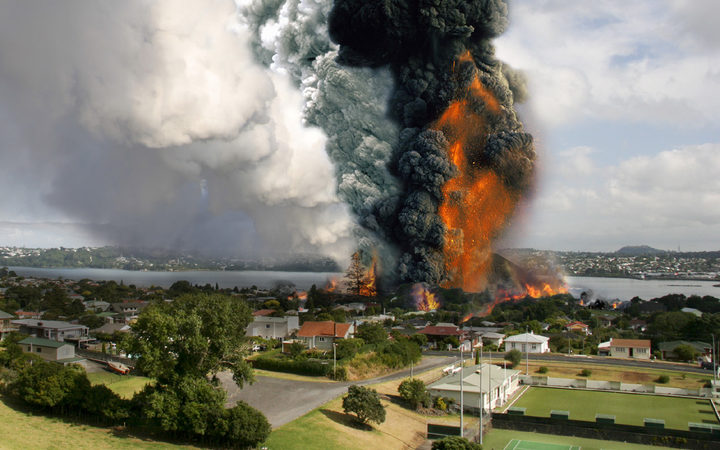 An image of a fictitious volcanic eruption in Auckland, produced as part of Exercise Ruamoko in 2008 Photo: Crown / beehive.govt.nz

They considered the economic impact of what would be considered an average eruption and mapped this against a hazard probability map to show "at risk" zones.

"The central part of Auckland City is primarily the area where we'd expect future activity to occur, because that's where most of the older volcanoes are."

He said the city's increasing intensification made it more vulnerable to eruptions.

"If you're trying to maximise your resources to develop a compact city that's got a very efficient transport system and so on, you tend to go for a single node and then you've got lots of different branches off that.

"You knock that node out, and the whole city goes over."

The region is home to more than 50 volcanoes. The council says it expects future eruptions will happen in new and unknown locations.

Prof Cronin said if another eruption did happen the area could remain volcanically active for years.

"You've got maybe a several kilometre radius where there's complete destruction of houses and buildings and roads," he said.

"And then you've got a zone around the outside that may change over time, where emergency managers will be putting restrictions in place for access because they're not quite sure what will happen next or there might be a lava flow coming in one direction or another.

"There's going to be a lot of uncertainty ... [that's] something that drives these business behaviours as well."