Volcanic eruptions and the Ash Lab 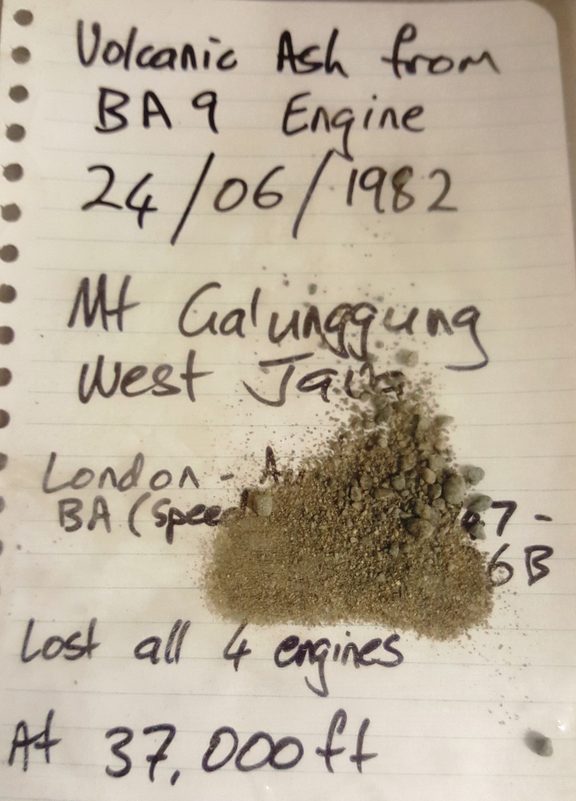 Ash from the engine of BA flight 9, which flew through a cloud of volcanic ash. Photo: RNZ / Alison Ballance

In 1982, British Airways flight 9 was at 37,000 feet above Indonesia, en route from Heathrow to Auckland, when it flew into a cloud of volcanic ash erupting from Mount Galunggung. Clogged with debris, all four of the jet’s engines stopped.

The crew alerted authorities to the emergency and put the plane into a long glide. They made repeated attempts to restart the engines. Finally, one and then the others sputtered into life.

Their windscreen sandblasted by the gritty ash and with barely any visibility, the crew safely made an instrument landing into Jakarta.

Thirty five years later, natural hazard scientists Thomas Wilson and George Williams stand in the dusty basement of an old building at the University of Canterbury holding a plastic bag containing ash caught in one of the engines.

For them it’s an historic relic that marks an important turning point in our understanding of the impact of volcanic ash on the technology that underpins modern life.

“It was basically the first time in the world that we’d ever seen a plane flying through such a dense amount of ash,” says George. 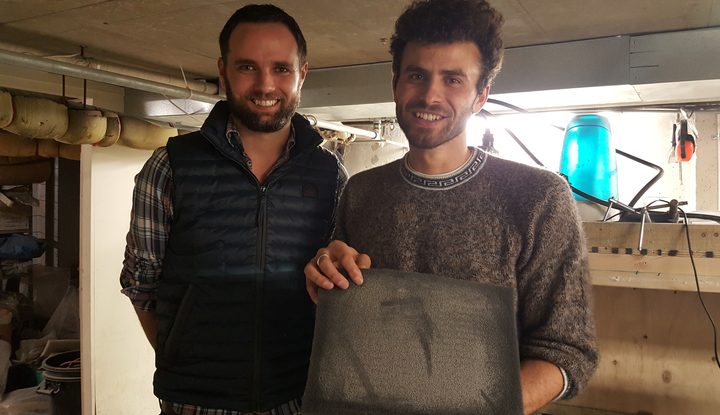 Thomas Wilson and George Williams, in front of the wooden wind tunnel used to blast volcanic ash onto generator filters, such as the one George is holding. Photo: RNZ / Alison Ballance

The pair is surprised by the gravelly nature of the ash, which is much coarser than they had expected.

“It was one of the first really big lessons with this [type of] volcanic ash, [which] has cooled so quickly it is mostly glass,” says Thomas. “The internal combustion temperatures of these jet engines melts the glass, and ends up clogging the engines.” 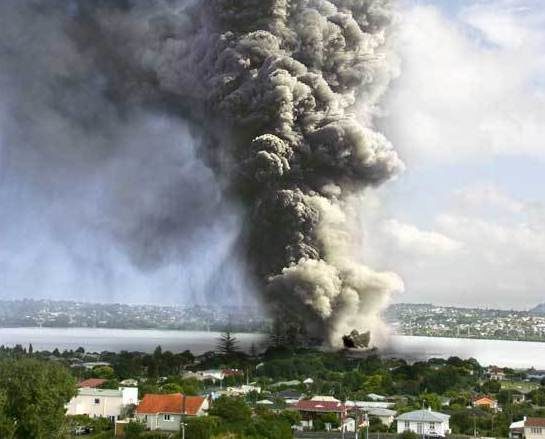 A fictitious volcanic eruption in Auckland, produced as part of Exercise Ruamoko a few years ago. Photo: RNZ

Flight 9 has not been the only aircraft to experience engine failure from volcanic ash, and authorities now move quickly when large ash clouds threaten plane safety.

In 2010, the eruption of Eyjafjallajökull in Iceland closed European airspace for many days, and in 2011 ash clouds from Chile's Puyehue-Cordon Caulle volcano disrupted flights in the Southern Hemisphere, including New Zealand.

While it is easy to divert planes from the area around an eruption, nearby towns are not so lucky – they are forced to deal with ash fallout that can last for many days. The Argentinian town of Barriloche, for example, lost power during the Chilean eruption.

“Probably the most common infrastructure outage is loss of electricity supply,” says Thomas. He explains that the conductive nature of volcanic ash falling on high-voltage power lines can cause short circuits and black outs. 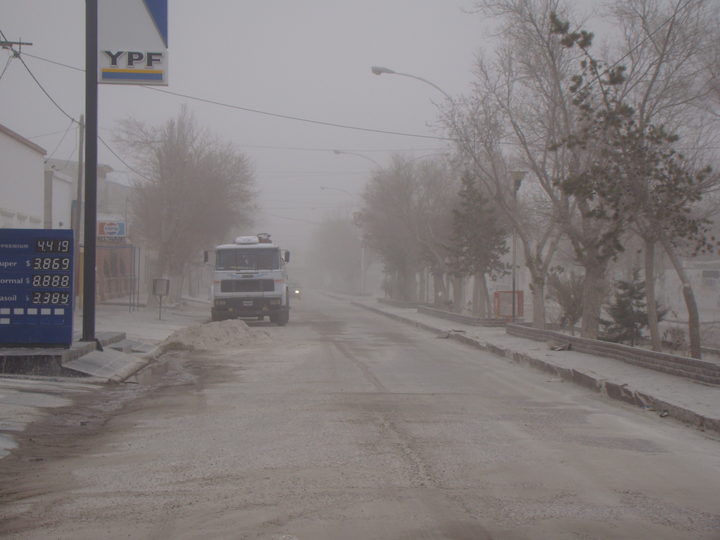 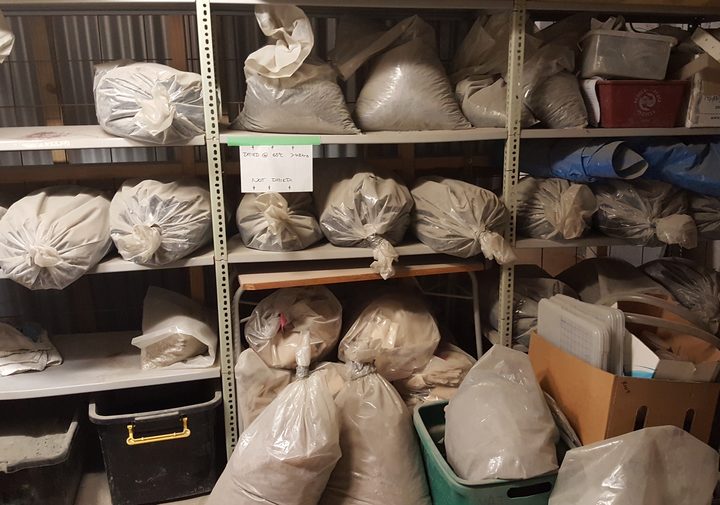 In their purpose-built Ash Lab at the University of Canterbury, Thomas and his team are currently researching various aspects of ash impact on infrastructure.

They are working with companies such as Watercare in Auckland, who will be relying on large back-up diesel generators to keep water supplied to Auckland households in any future volcanic emergency.

Watercare are part of the Auckland Engineering Lifelines Group, which is drawing up disaster resilience plans to deal with a volcanic eruption, either in the Auckland itself, or further afield in the central North Island.

George has been testing various diesel generator filters for them, to see which performs best when exposed to different kinds of ash.

The filters are placed in a wind tunnel and blasted with different kinds of ash; some are as smooth and silky as talcum powder, while others are much coarser.

So what advice have Thomas and George given the Auckland Engineering Lifelines Group to keep diesel generators running during an emergency? Given it is almost impossible to prevent the filters clogging, they recommend a good stockpile of spares, and people trained in quickly replacing them who understand they will be required to continue working throughout the emergency.

George has also suggested that a simple metal hood above the air intake might deflect some of the larger pieces of ash. 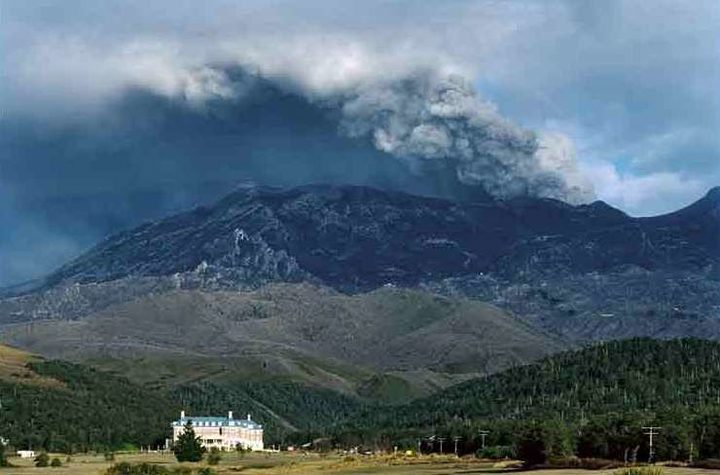 Preparedness is one of the basic recommendations for all natural hazard resilience – we can’t prevent disasters such as volcanic eruptions and earthquakes but we can think about likely impacts and be prepared for them.

So, in the unlikely event that Auckland experiences an ashy volcanic eruption and residents find that water keeps coming out of the taps, they can spare a thought for George and Thomas and their dusty experiments in the Ash Lab. Their advice will have helped ensure you can easily have that drink of water.