Nine To Noon for Tuesday 3 November 2015

09:05 Warnings that big uptake of solar panels will increase cost of power for those who don't have them

The Electricity Authority says a massive uptake of solar technology will be bad for other consumers. It wants lines companies to start thinking about changing the way it charges consumers for distributing power from the grid - saying if they don't they will encourage a lot of investment in solar panels - which will be bad for those who don't have them as they'll be picking up more of the cost of maintaining the networks. Carl Hansen is the Authority's chief executive.

The global market in counterfeit goods, is estimated to be worth  $2.6 billion every year and over half of pharmaceuticals sold online are thought to be counterfeit. Engineering company Sofmat, is developing 3D bar-codes, invisible to the naked eye, to help stop this lucrative global market.

The codes consist of a series of small indentations with precise, slightly different depths, allowing for billions of different combinations. With four pins making holes at 36 possible heights, the team can produce 1.7 million codes. Next they want to step up to a six-pin system, with more height variation, which will allow 14 billion variations. The Sofmat team hope to launch their barcodes in November 2016. Phillip Harrison is Sofmat's managing director 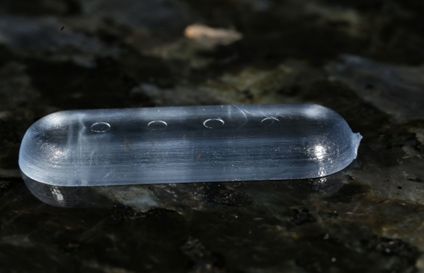 Indentations in a simulated pill 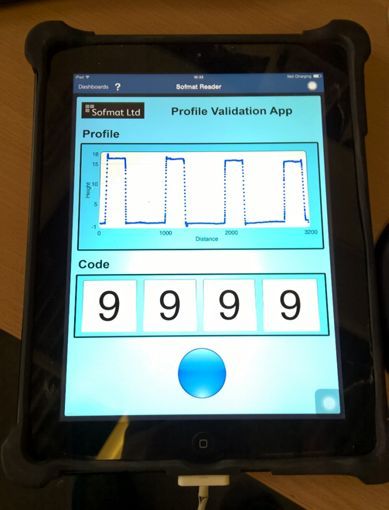 The “decoding” of the bar code to produce a alphanumeric signal. 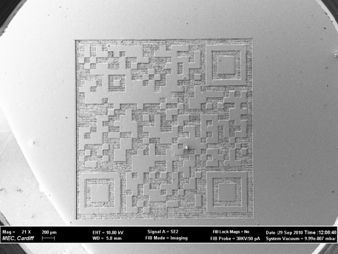 The image shows a linear trace across the centre line of the previous bar code image, showing the step heights and the spacing of the indentations.

Susan Milligan reports on the most recent GOP debate

Peter Capaldi, is a lifelong fan of Dr Who and the 12th actor to take on the coveted time-lord role. He has also played a doctor of a very different sort, the political spin doctor Malcolm Tucker in the series, The Thick of It... a character known for his expletive ridden rants, and acidic wit, and Machiavellian machinations.

0:30 Book review: A Few of the Girls by Maeve Binchy 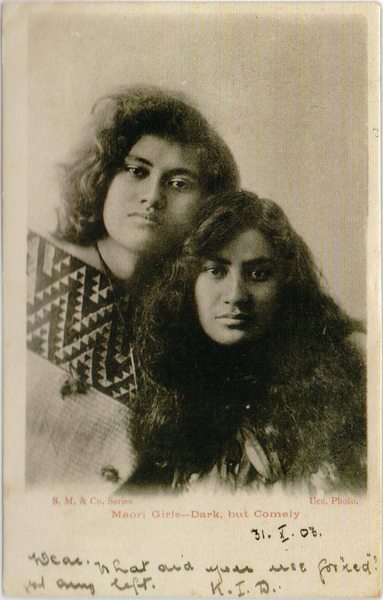 This SM & Co series postcard features a photograph by Arthur Iles, together with an attitude in the caption that reflected wider stereotypes: ‘Maori girls, dark but comely’. 1903. From the collection of Leo Haks 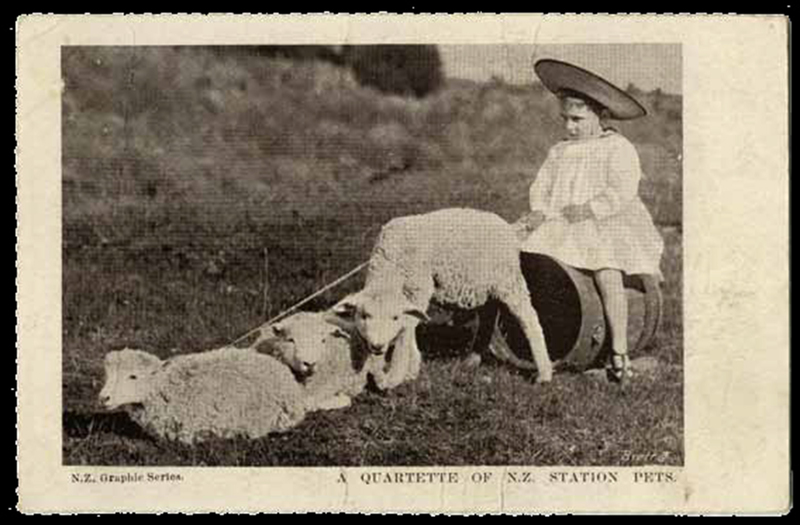 This card was issued as one of a set of free cards to promote The Graphic and Ladies Journal between 1904–1906. Other New Zealand publishers used similar promotions up until about 1906. From the collection of Leo Haks 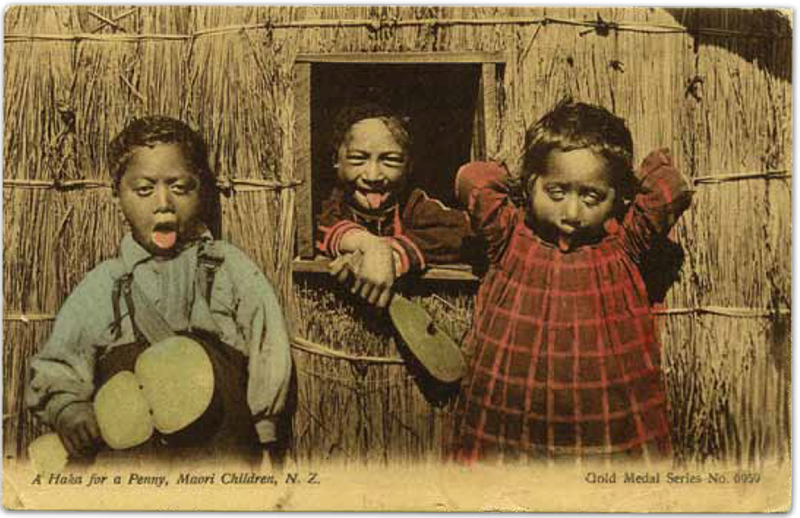 While adults demonstrated their everyday chores for tourists at Whakarewarewa Village, children became popular performers, diving into the water to retrieve pennies and performing haka for the same reward. From the collection of Leo Haks 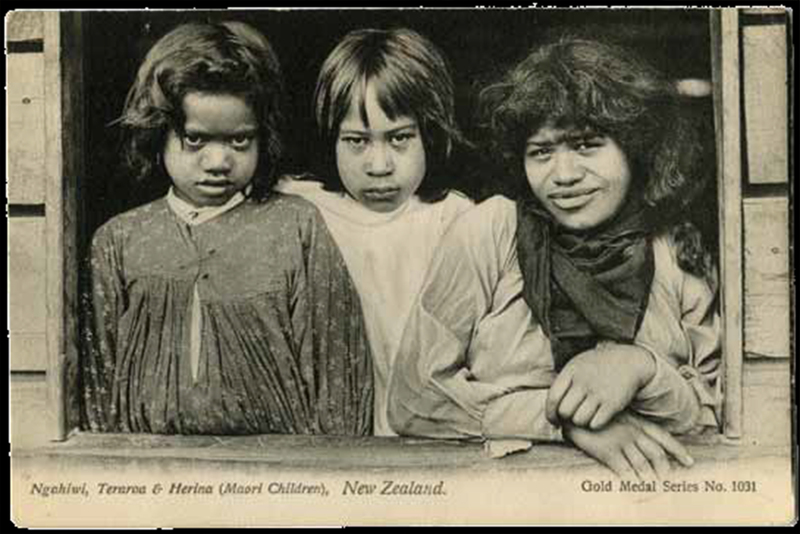 A rare example of children being acknowledged by name in a postcard caption. From the collection of Leo Haks 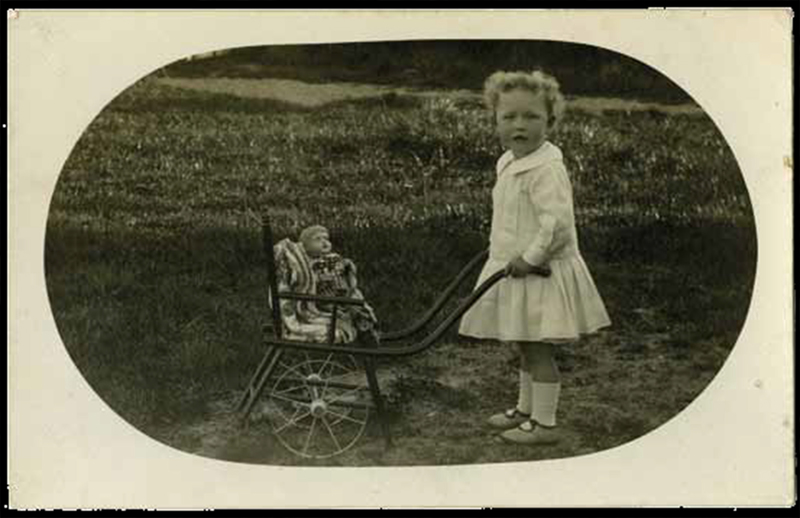 The reverse of the card reads: ‘The Dainty Studio, Oamaru, NZ.’ Photographic studios sometimes took appealing photographs and made them into postcards. From the collection of Leo Haks 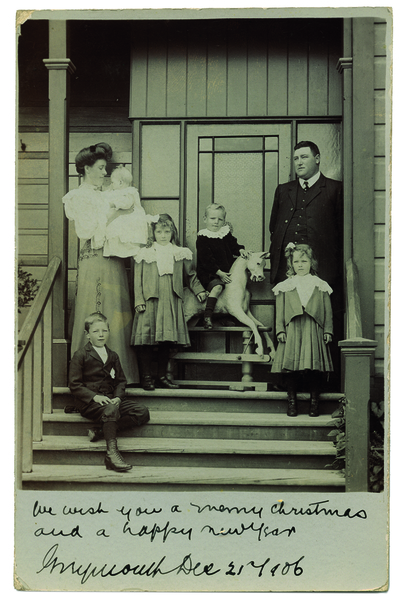 A good example of a real picture postcard, used to distribute family photographs to relatives and friends—as one might employ email or social media today. The handwritten message reads: “We wish you a Merry Christmas and a Happy New Year; Greymouth, Dec 21, 1906.” From the collection of Leo Haks 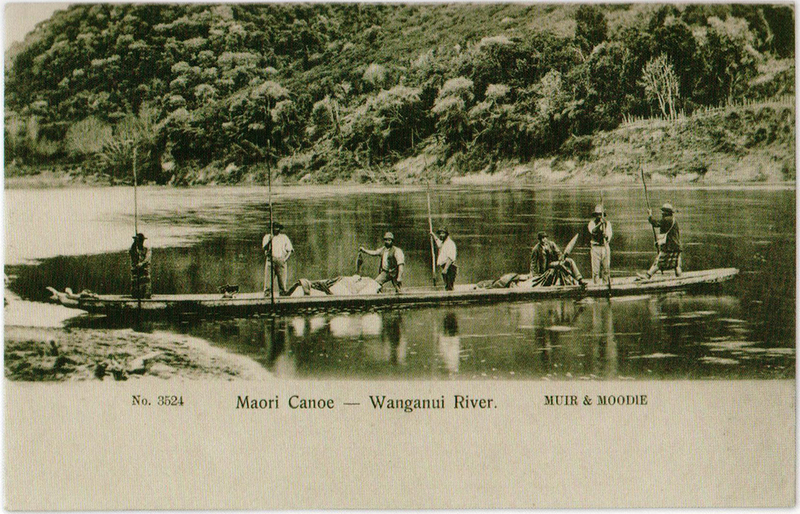 Photographer Alfred Burton’s journey into the King Country began at Upokongaro in a canoe crewed by 14 people, including an artist, an engineer, railway workers and local Maori. From the collection of Leo Haks 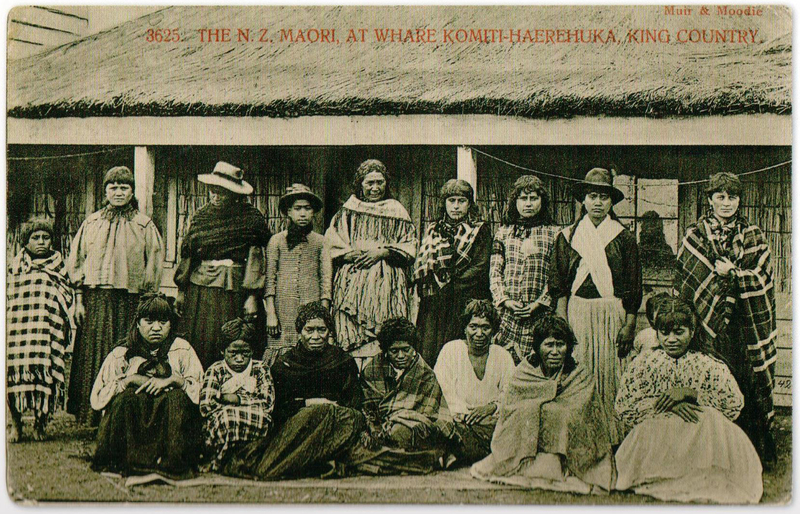 After photographing the chiefs (above), they suggested that their families should also be photographed. Both images made the final collection. From the collection of Leo Haks 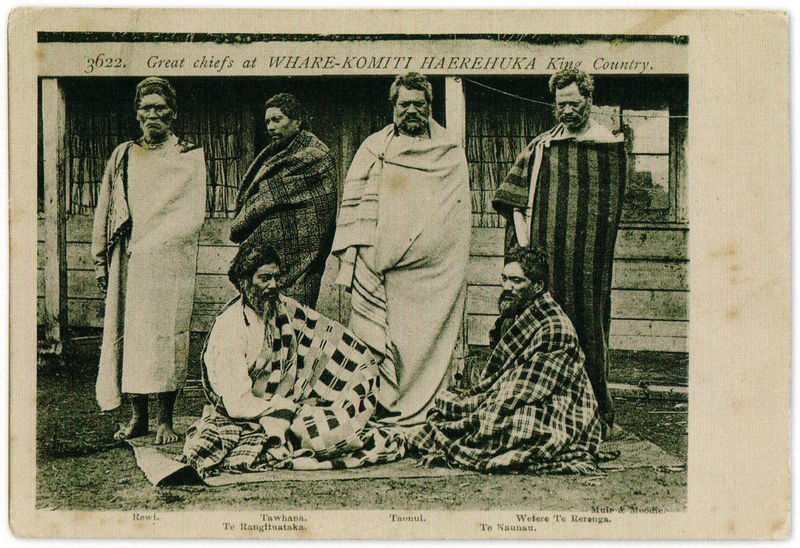 Burton was given permission to photograph six chiefs of Ngati Maniapoto, who were meeting at Whare Komiti Haerehuka in June, 1885. In the back row, from left, are Rewi Manga Maniapoto, Tawhana Tikaokao, Taonui Hikaka and Hone Wetere Te Rerenga. Te Rangituataka is seated at left and Te Naunau Hikaka at right. Maniapoto had only just returned from laying the first sod on the construction of the North Island Main Trunk Railway on April 15. His canoe was made available for railway engineer Rochfort to inspect the King Country for suitable places to build railway stations. From the collection of Leo Haks 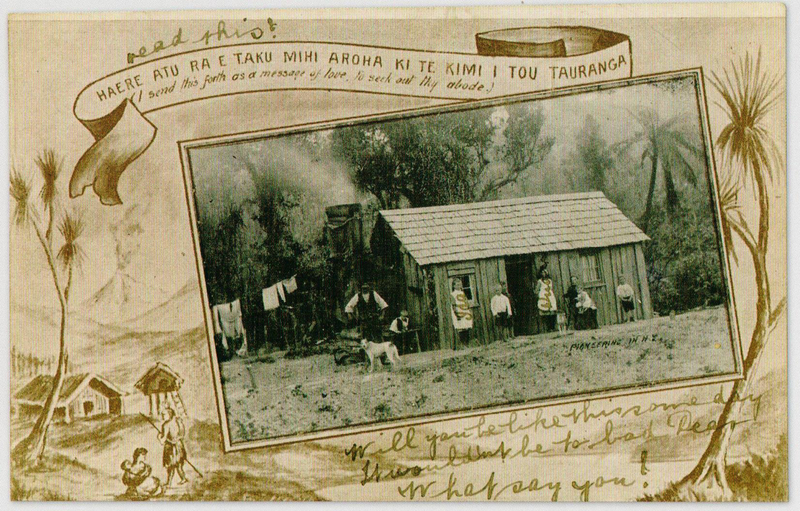 Sisters Ethel and Ida Higgie grew up in the Wanganui District. At some point Ida left to live and work in Hawera, and the pair used postcards to exchange news and gossip. Meanwhile, Ethel was also receiving postcards from two men, Joe and Charlie, which were clearly of a more private nature. From the collection of Leo Haks 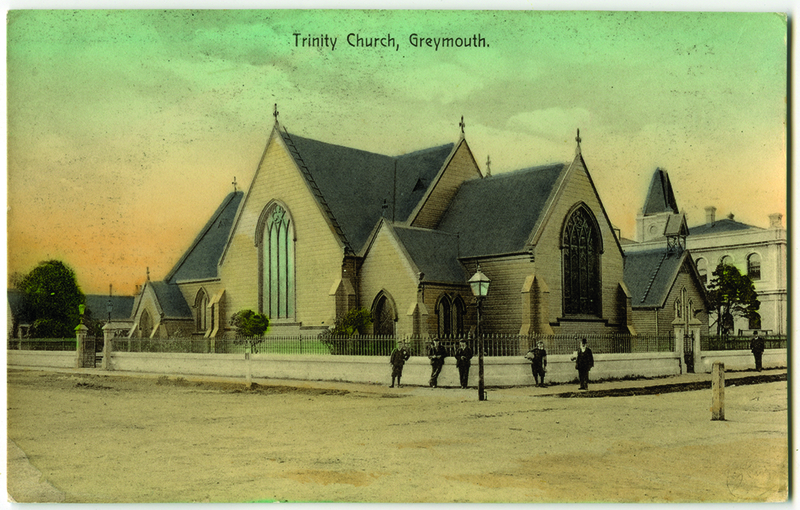 This elegant wooden Anglican church graced a street corner in the town of Greymouth in the early 1900s. From the collection of Leo Haks 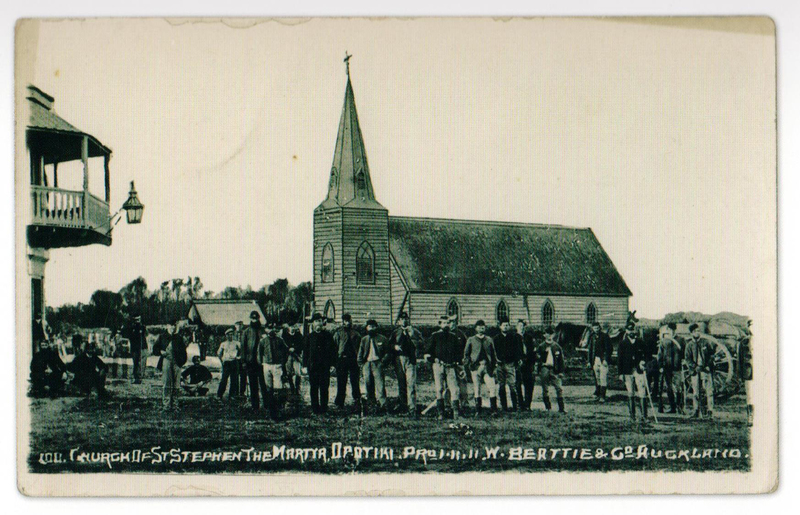 Men of the Opotiki Expedition, Patea Rangers and Wanganui Yeamanry Cavalry are pictured in front of the Church of St Stephen the Martyn in Opotiki, 1868. The Reverend Carl Volkner, a German of Lutheran background, was appointed to the Church Missionary Society base at Opotiki in 1861. In 1865, the second Taranaki war broke out and an impending outbreak of typhoid disease saw Volkner travel to Auckland to purchase medicines and deliver his wife there for protection. In the interim, Hau Hau invaders ransacked the mission. From the collection of Leo Haks 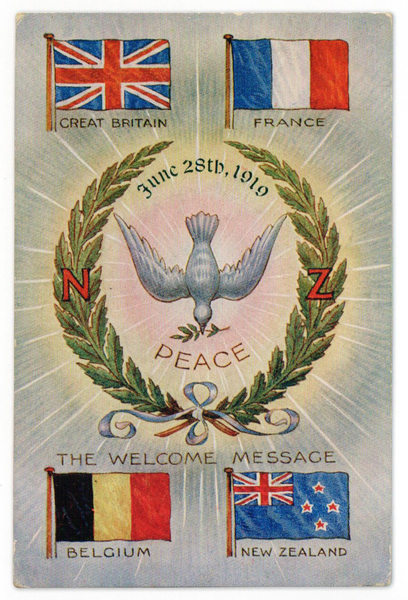 This postcard to celebrate the end of WWI was designed by J D McKenzie, a returned soldier. From the collection of Leo Haks 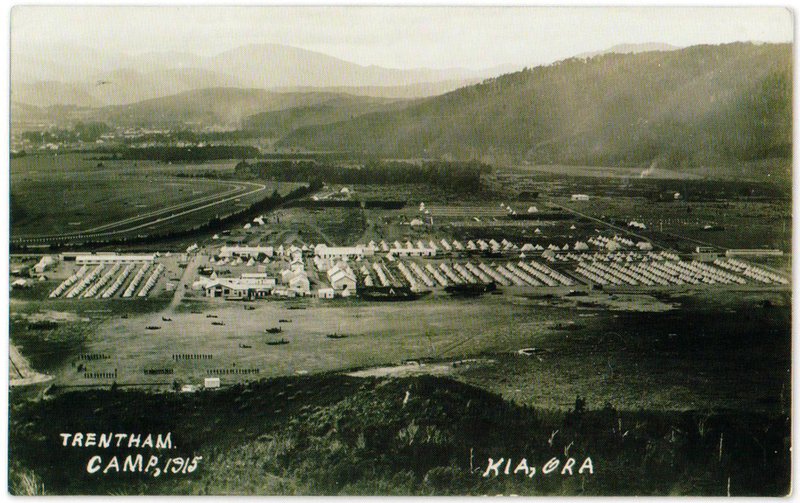 Trentham Camp was established in 1914 to train army personnel in preparation for World War I. As the war dragged on, the camp became overcrowded and by 1916 it shared duties with a larger camp at Featherston. From the collection of Leo Haks 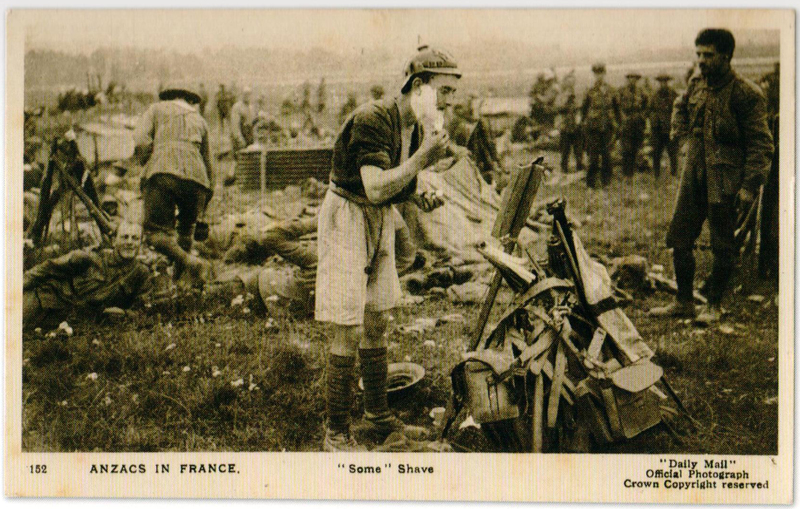 The Daily Mail’s series of World War I postcards avoid the horrors of combat, depicting instead scenes of life at the front. From the collection of Leo Haks 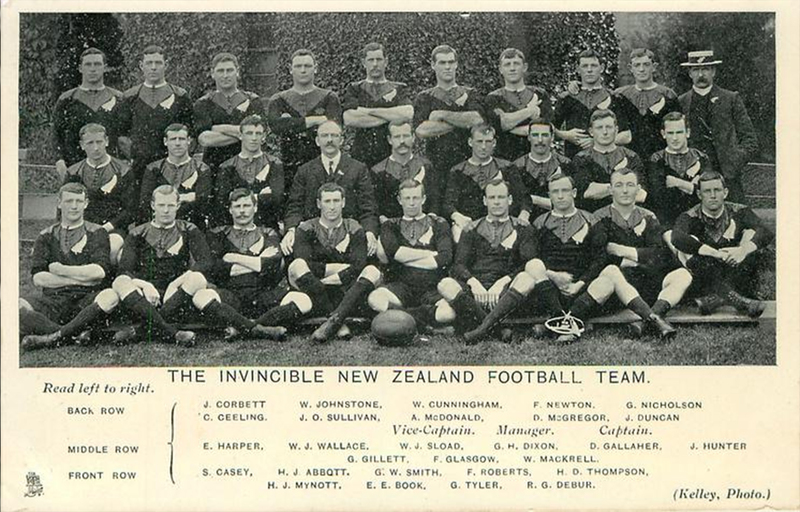 This card was produced to commemorate the 1905 ‘Originals’ ruby tour. A later world tour by the All Blacks in 1924-1925 would earn them the title of ‘Invincibles’. From the collection of Leo Haks 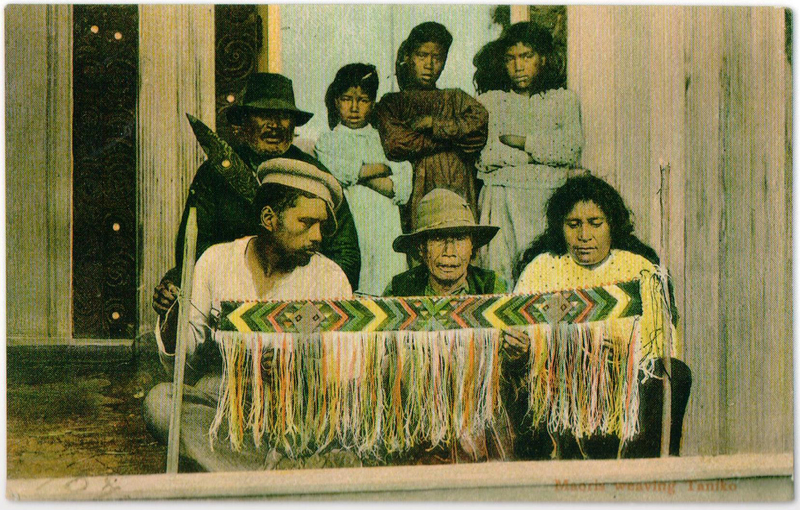 Weaving was used ceremonially, such as in taniko, piupiu, cloakmaking and tukutuku weaving. It is believed that the artist is a vehicle through whom the gods create. “Maori weaving is full of symbolism and hidden meanings. Embodied within are the spiritual values and beliefs of the Maori people,” said noted weaver and artist Erenora Puketapu Hetet in 1989. From the collection of Leo Haks 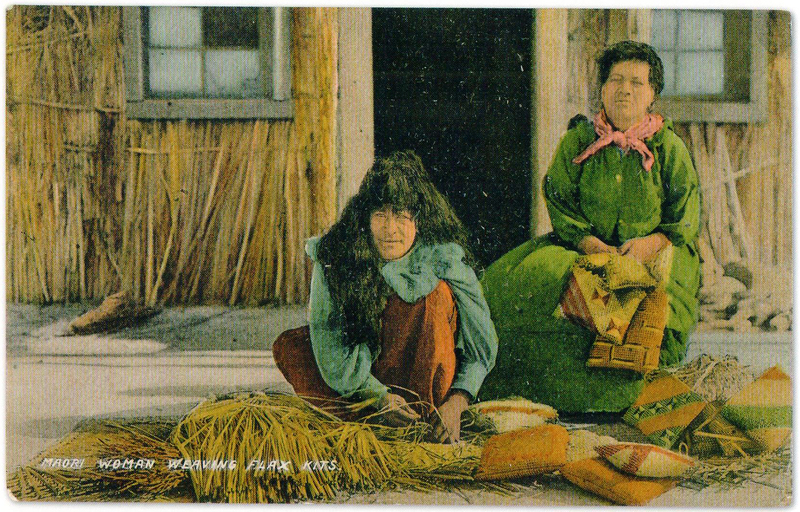 Maori have used native flax or harakeke in weaving for hundreds of years. They would cut the flax, strip the fibre from the leaf blade using a mussel shell, then begin the slow process of scraping, washing and beating the fibre. The long strands of fibre would be laid out on the ground to dry before weaving. This hand-dressing produced a fine product. This series, photographed by Thomas Pringle, illustrated the many and varied uses of the fibre. From the collection of Leo Haks 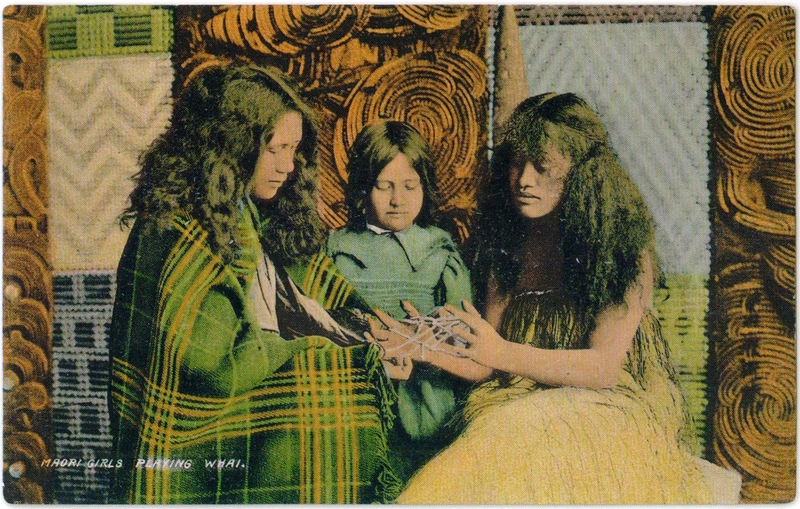 Whai, or Te Whai Wawewawe a Maui, is a hand game played with flax-string, similar to cat’s cradle. It is usually played with string made of flax fibres. From the collection of Leo Haks 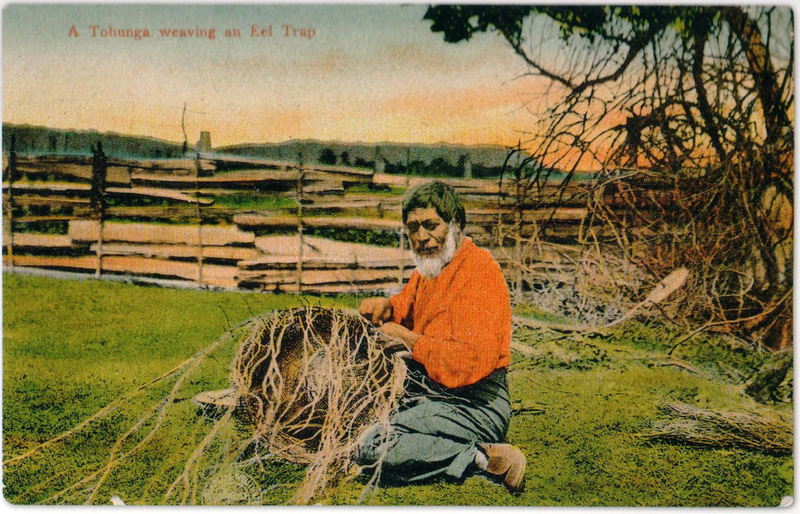 The strength and durability of flax made it ideal for use in clothing, homewares, food gathering, fishing, hunting and medicine. Baskets, footwear, ropes, mats, bird snares, sails and fishing nets were the everyday products of traditional weaving techniques. The tohunga was a specialist in his craft and had knowledge of both the skills and necessary rituals associated with the fabrication process. From the collection of Leo Haks 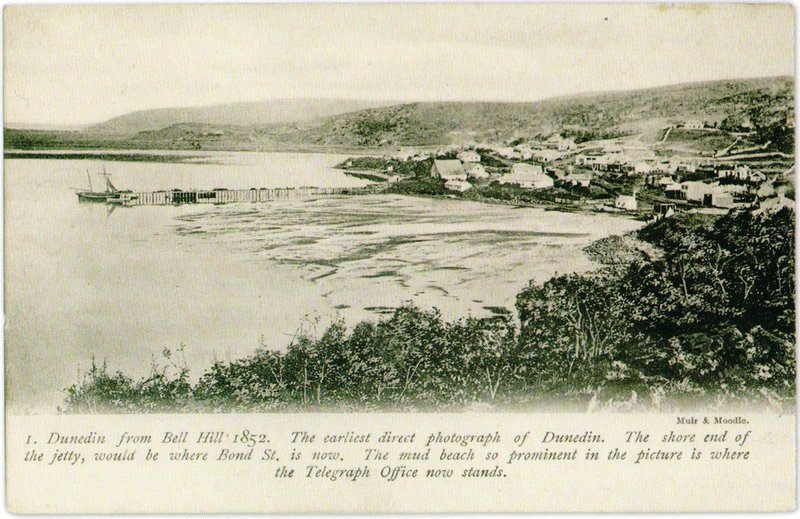 This topographic view of Dunedin was taken from Bell Hill by photographer John Tensfield in 1858 (erroneously dated 1852). It was Muir & Moodie’s first card. Similar early views of Dunedin were taken by William Meluish and are dated 1860-1872. From the collection of Leo Haks 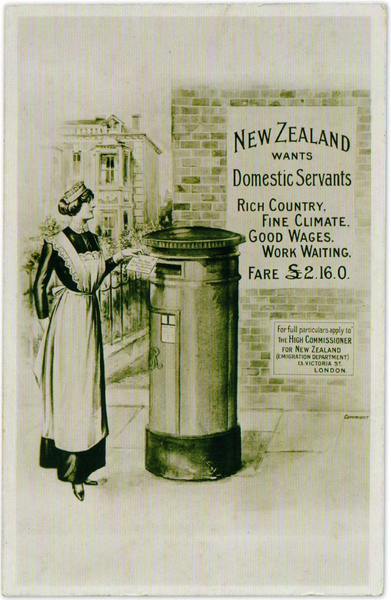 New Zealand needed people and finance to build its infrastructure. In 1913, on behalf of the government, the New Zealand High Commissioner’s office in London advertised for migrants from Britain, France and elsewhere to relocate to New Zealand and contribute to its development. This card was not only a request for domestic servants; its aim was to secure women to become wives as well as workers in order to correct the imbalance of the sexes in colonial New Zealand. Other postcards in this series aimed to attract potential farmers or industrialists by targeting skills and capital. Cultural activities were also promoted, but most of the images advertised a lifestyle that was far superior to the reality for most migrants. From the collection of Leo Haks

A look at New Zealand history through postcards which provide a fascinating insight into the roots and evolution of New Zealand culture and reflect the development of our industries and the beauty of our landscapes.
Leo Haks is a lifelong collector of culturally significant items. He and his artist-partner, Colleen Dallimore have a large collection of New Zealand postcards. 500 cards are featured in their new book, Post Marks - The Way We Were, which focuses on early New Zealand postcards from 1897-1922 and the story they tell.