Jeanne Kisacky is on the show to talk about how we got to the modern hospital. As she explains it started with windows, and getting rid of them.

Jeanne S. Kisacky is an independent scholar who has taught architectural history classes as an adjunct instructor at Cornell University, Syracuse University, and Binghamton University. Her book, Rise of the Modern Hospital: An Architectural History of Health and Healing has just been published. 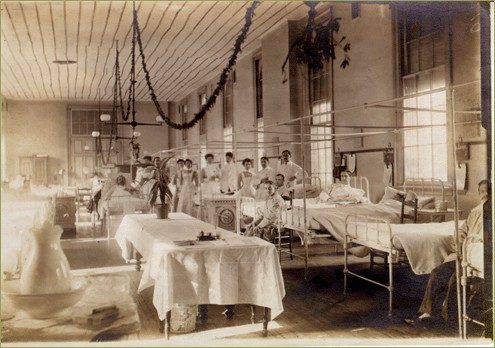 In The Sampler this week Nick Bollinger experiences the skin-tingling pop of Wellington's Glass Vaults; an album from Mercury prize-winners Alt-J that seems to travel between time zones; and the swansong of rock'n'roll founding father Chuck Berry.

Why is Germany such a reluctant military power? Germany has grown in international influence. And its potential military role has been hitting the headlines. US President Donald Trump's criticised Germany in particular for not spending enough on defence. And Chancellor Angela Merkel has warned that Europe can no longer completely depend on the US - or the UK after Brexit. Germany, she argues, must do more in the military sphere. But Germans themselves are very reluctant to do this. As Chris Bowlby discovers in this documentary, German pacifism has grown since World War Two, when Nazi armies caused such devastation. Today's German army, the Bundeswehr, was meant to be a model citizen's force. But it's often poorly funded and treated with suspicion by its own population.