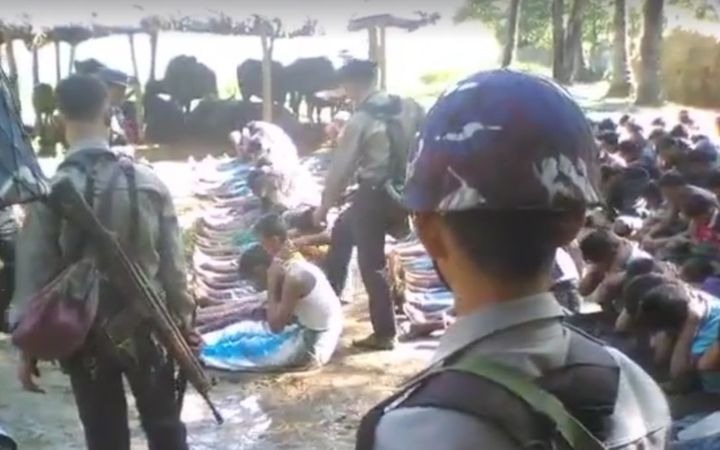 A screen capture of the footage which shows villagers sitting in lines in front of police officers. Photo: Screenshot / Arakan Times / BBC

Is genocide unfolding in Myanmar? The Rohingya people are an ethnic Muslim group in Myanmar who are often described as the world's most persecuted minority. Executive Director of Fortify Rights Matthew Smith offers an insight into the continuing state sanctioned violence and oppression against them, including the exclusion of media and aid programmes.

Nick Bollinger detects sonic and emotional developments in the lates abum by The xx; discusses the blues-infused music of Oakland-based Fantastic Negrito; a sketchy set of topical tunes from Neil Young; and the reissue of three lost classics from proto guitar hero Link Wray.

Independent scholar Brian Easton on the distributional consequences of policy change and why they are often overlooked.

The Friday Game - In the shadow of Dubai's skyscrapers, the sight of men playing cricket on sandy lots beside the road every Friday is so common that it almost goes unnoticed. This is their story - a story of migration and opportunity, loneliness and brotherhood.

Part 5 of  'Great Ideas', a series produced in association with Victoria University of Wellington. Professor Art Pomeroy; Emeritus Professor Nigel Roberts; Associate Professor Kate Hunter join Megan Whelan to look at how the idea of democracy in ancient Athens gave us the governments we have today, and consider today's challenges to the rule of the people.

Trevor Reekie hosts a weekly music programme celebrating an eclectic mix of 'world' music, fusion and folk roots.Tonight, music from Italy and India, Iran, Gypsy Balkan sounds from Barcelona, a track from influential 60's English folk singer songwriter, the late  Sandy Denny and a quick chat with Rob Ruha who toured his album Pūmau around Aotearoa last year and will be bringing his show to Womad in March.