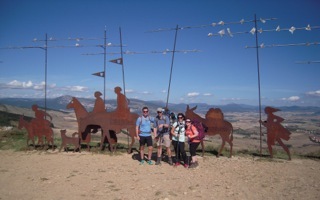 7:12 Our Own Odysseys - The Camino Limp
the difficult and magical moments Anthea Wade experienced while walking the ancient pilgrim path from Saint-Jean-Pied-de-Port, France to Santiago de Compostela in Spain...

8:43 Nights' Pundit - Religion
religious studies Prof. Douglas Pratt from University of Waikato on one's faith in God or gods... Reactive Co-Radicalisation -a new form of religious extremism has arguably emerged, one which paradoxically portrays itself as a counter to another perceived extremism regarded as a real and imminent threat...

9:07 Tuesday Feature - Exchanges at the Frontier: Is Pain an Emotion?