7:12pm DANIEL'S DIGS
For the past couple of years, Daniel has lived in a patch of bush next to the motorway in central Auckland. He occasionally goes begging to supplement his benefit. He invited Bryan around for a yarn about his life, why he's homeless, whether more people are asking for money in the streets, and how he passes the time in his tent at night.

Why do people ask strangers for money? Sonia Sly investigates.

Daniel Davidson explains his approach to Justin Gregory. Where to look, what to say, where to hang out, and how some of the others doing the same are coping.

BODY PARTS
Professor Emerita in Science Communication at the University of Otago Jean Fleming, on (quirky) human anatomy... ears and how cochlear implants allow those who aren't able to, to hear...

9:10pm AN NEW ERA OF AUTHOR
the road to becoming a successful self-published author of dark fantasy and paranormal romance, with Steff Green, her latest book is the Witch Hunter and she also has a book coming out at the end of October, the second book in the Engine Ward series, The Gauge War... 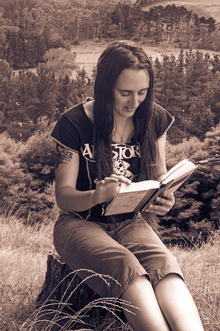