"This has been the best job in the world and that's why I've stayed for so long … it's important to get voices of musicians out into the ether and let them be heard."

After sixteen years at RNZ Music, content producer and presenter Kirsten Johnstone is moving on. She joins Tony Stamp to reflect on her life and career, and play ten of her favourite songs. 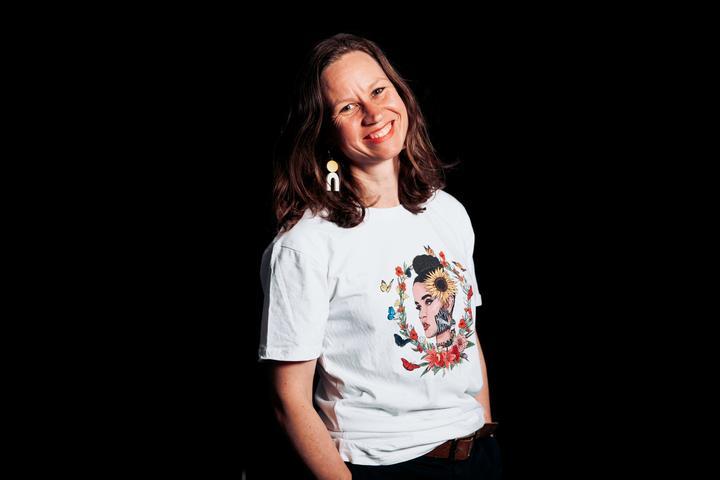 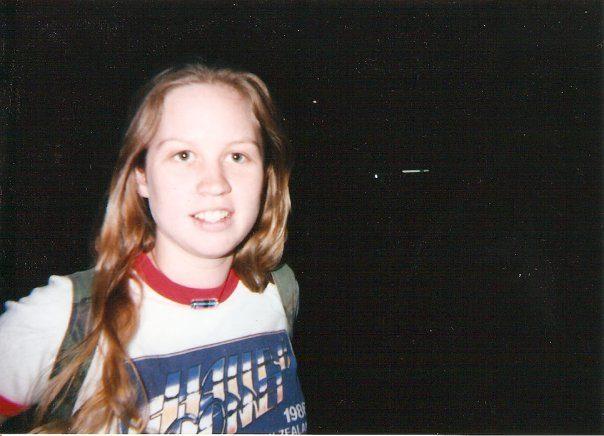 At a Pixies concert aged 16 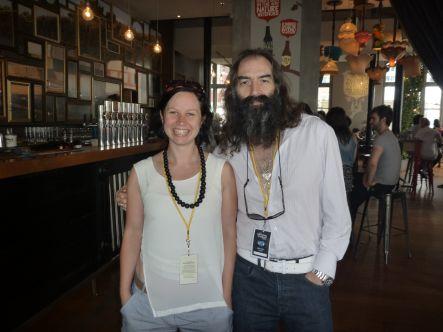 With Warren Ellis from the Dirty Three 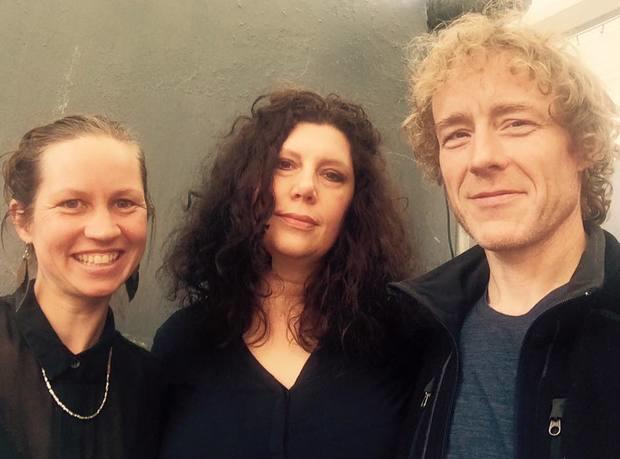 With Mimi Parker and Alan Sparhawk from the band Low 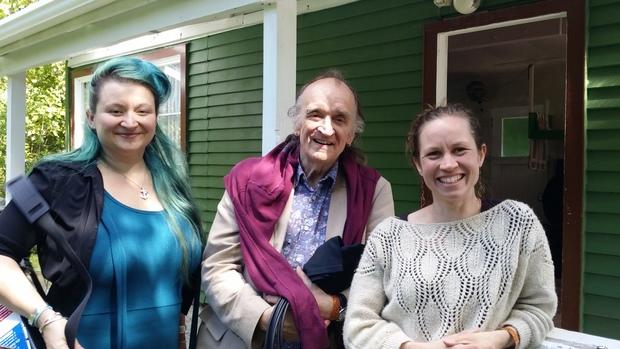 With Eliza Carthy and Martin Carthy (photo by Graeme Tuckett) 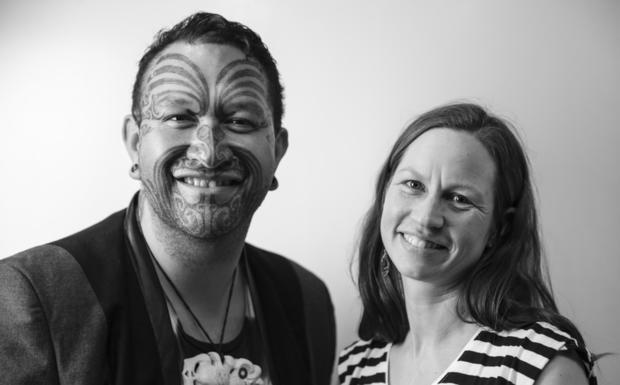 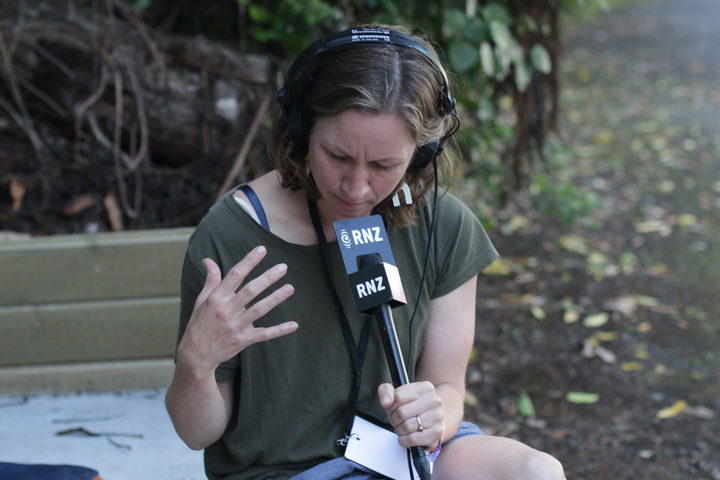 On air (photo by Steve Burridge) 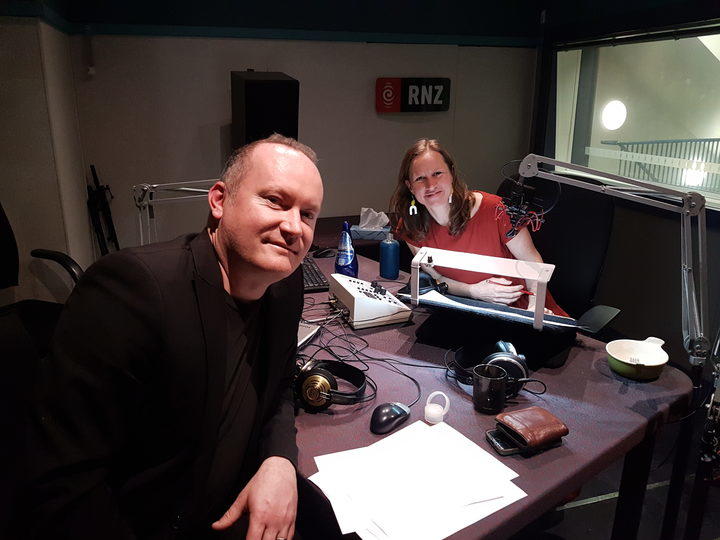 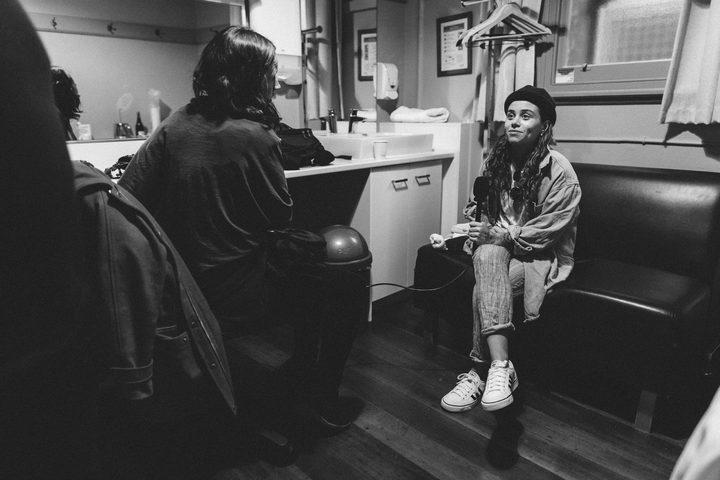 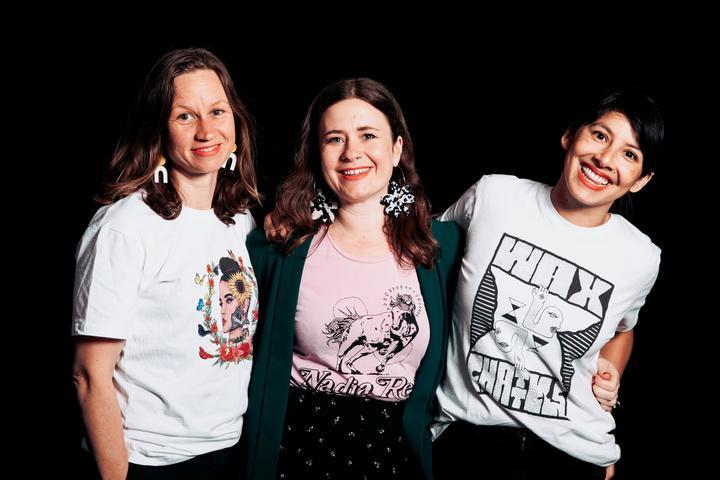 With Melody Thomas and Yadana Saw

Song 1: 'Epitaph' by King Crimson from the 1969 album In the Court of the Crimson King:

As a kid, Kirsten used to listen to this album with her dad on the farm.

"The album has such great contrasts. The pomp and the understated loud/quiet. It's composed and improvised. It has these incredible soaring tunes. It encapsulates elements of pastoral folk and improved jazz and rock. There's also a lot of really great flute parts in it."

Side note: Kirsten is a classically trained flute player, who first taught herself to play by ear as a child, with the help of Irish flute player James Galway's CDs.

Copying someone whose sound you like is a really good way of learning an instrument, she says. Another tip – practise in the bathroom, where you'll sound good.

Kirsten discovered this Australian instrumental rock band around the age of 16.

"Me and my friends were going over to Palmerston North for raves and Georgie Pie and moonshine and a record store called Pretty On The Inside [where she first heard Dirty Three]."

Song 3: 'Little Things' by Trinity Roots from their self-titled 2000 EP:

Trinity Roots are an incredible band New Zealand hadn't seen the likes of when this EP came out, Kirsten says.

"This version of 'Little Things', it sits right in the middle of my heart. I have sat in my car crying a few times."

"I liked PJ Harvey in the late '90s but this was really the album where I stood up and listened to her. Such great imagery in this album and her vocal range is incredible and she's just continued as an artist to stretch that. And of course those beefy guitars of hers."

Song 5: 'Chicago' by Sufjan Stevens from his 2005 album Illinois:

Sufjan Stevens is one of Kirsten's all-time favourite musicians.

"I'd come out of a terrible relationship, found a job that I really loved… [The first time I heard this song, there were] actual tears of euphoria running down my face. It's such a great song for bottling that feeling of freedom, of not being tied down, of hitting the road with your friends."

"This angular… polyrhythmic … I mean, its math rock, isn't it? So much energy. I loved this band. I probably went and saw them a dozen times."

"This song displays a kind of nihilism that really appealed to me at the time and still appeals to me now the casual way she says 'I might leave tomorrow' .. Nina Nastasia's plaintive unemotional voice just kills me here."

Kirsten says she has RNZ Music presenter Trevor Reekie to thank for introducing her to this "lovely and plonky" version of this song.

"[Karen Dalton] was this tall beautiful woman who turned up in the late 60s in Greenwich Village. She was half-Cherokee, half-Irish I think. [She arrived with] a banjo, a guitar, two little children and a failed marriage behind her."

"The story [in this song] brings up so many images in my mind and it's a little bit of a mystery as to what happens."

Side note: Kirsten plays the banjo herself, picking it up for the first time aged 30 'cause she missed playing an instrument.

Although she trained in the flute for four years, a classical music career wasn't for her, Kirsten says.

After university, she had bad experiences with conductors, one arrogant European especially, and her personal music taste was well outside the classical sphere.

"If you're going to be a classical player you need to give up everything else in your life and the competition to get a flute job is fierce."

Song 9: 'Mythological Beauty' by Big Thief from their 2017 album Capacity:

Adrienne Lenker sings about her own "incredible personal history" in this song, Kirsten says.

"The family had just escaped this cult and were living in a makeshift shed… … it just speaks to me about the dedication of motherhood in such an empathetic way, from a [daughter's perspective]."

Kirsten first heard this song in the 1988 River Phoenix film Running On Empty.

"It just gave me all the feels. It's one of those songs that in the last few years I've come back to time and time again. It's just a great ballad."

Some of Kirsten's favourite RNZ interviews:

"Not all of them are fantastic interviews. When you're sitting on the end of a conveyer belt of international interviews and you've got your ten-fifteen minute time slot you're not going to get the best out of them no matter what you try but it's been a real privilege to be able to talk to some of those people."

Kirsten says one of her favourite things about working with RNZ Music has been covering music festivals, big and small.

"Running around with a microphone gives you license to talk to anyone that you want. And I love that. I wish I was that brave without a microphone."