Laneway 2019: five acts you should know about

Auckland’s Laneway Festival turns 10 in January and as always, the one-day event features a fresh lineup of new and exciting acts. RNZ Music’s Bridie Chetwin-Kelly gives us her picks. 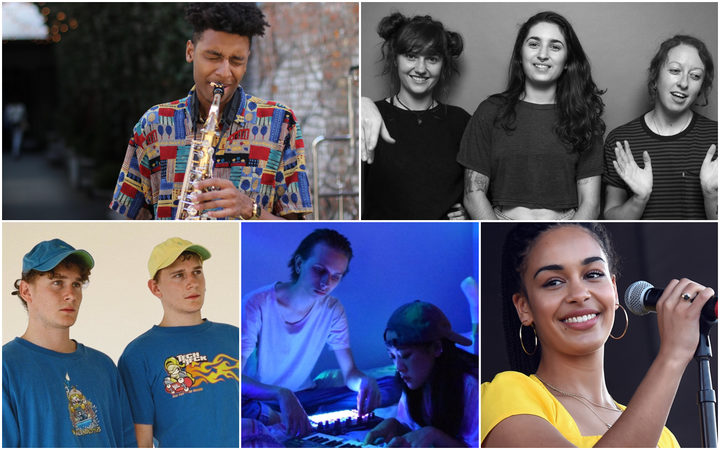 Imugi is Carl Ruwhiu and Yery Cho. They released their latest EP Vacasian in 2017 and it’s gorgeous.

Their music largely focuses on multiculturalism and the experience of being an immigrant: previous single ‘Fade Away’ opens with the words, “I have patience in bi-cultural spaces.”

Imugi describe their music as, “When you get butt-dialled from a club and you hear that bass pumping,” which totally makes sense as long as the butt doing the dialling is extremely talented and makes great pop music that doesn’t quite follow the rules.

Hailing from Melbourne, this punk rock trio aren’t just well-known for their music. The group have a reputation for calling out misogyny in the music industry and highlighting issues including the under-representation of women on festival lineups.

You might have caught their intimate show at Whammy earlier this year, but if not, seeing this group on a bigger stage with a bigger audience will be well worth it.

Look out for ‘The Opener’ in which lead singer Maq snarls her now well-known line, “Just get a female opener, that’ll fill the quota.”

If you’re into smooth sophisticated RnB and really sexy saxophone, Masego is your guy. He calls his music ‘trap house jazz’ and after a couple of listens, you’ll understand why.

Citing DJ Jazzy Jeff as his mentor and Cab Calloway as his inspiration (the guy behind 1930s jazz classic 'Minnie the Moocher'), his music incorporates a mix of singing, poetic rap and saxophone to create an ambiance that can only be described as full body and mind relaxation.

It’s also worth mentioning he may be one of the first artists to ever sample Cab Calloway’s Minnie the Moocher in one of his songs, check out 'Girls That Dance'.

Jorja Smith could be this generation’s answer to Sade - and I mean that with the highest praise.

The UK based jazz/RnB singer-songwriter has made quite a name for herself after featuring on Drake’s surprise mixtape More Life, alongside Kanye West, Young Thug, and 2 Chainz.

Her own music is so good that remixes have frequently popped up on the internet including a rework with by veteran British producer Shy FX that features well-known grime MC Stormzy.

Sometimes melancholy and always smooth, her 2018 debut album, Lost & Found, shows off her ability to switch between RnB, pop and electronica.

Laneway audiences should expect an emotional, but laid back set from Ms. Smith.

Cosmos Midnight has made this list as a relatively new act, but also because they’re so fricken fitting for this lineup. Imagine: it’s Auckland Anniversary weekend, you’re slip slopped and slapped under the raging January sun, sipping on Rose while seeking shade beneath the leafy greens in Albert Park... and you’re getting down some smooth, summery electro-pop.

The duo are Australian twins Cosmo and Patrick Liney. Their music has been variously described as ‘electro pop’, ‘funky house’, and ‘RnB-twinged electro’. Either way, this collaboration with Sydney funk six-piece, Winston Surfshirt is easily one of the catchiest and danceable songs of this year.

Also listen to them cross over into rap mix ‘Where U Been’ ft LA hip-hop artist Boogie.