It was a scorcher in Auckland yesterday with the temperature hitting 28 degrees. Thank goodness Laneway Festival’s new(ish) home is in Albert Park.

It’s the second year the festival’s taken place at Albert Park after moving from its former home at Silo Park, and its new location is glorious. Watching bands in the park’s natural amphitheatre among Moreton Bay Figs and young Kauri is a real treat, and even in the concreted areas, there’s heaps of shade from the large roadside trees. 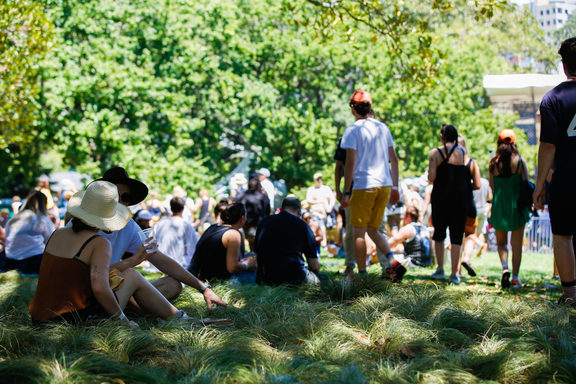 Festival-goers were mostly young, with a smattering of 40/50/60-somethings. The crowd was awash with patterned shirts and overalls, which were definitely the go-to fashion items this year. Women wore bandeau tops or spaghetti straps, despite the punishing sun.

Marijuana smoke flavoured the air, there was a nice breeze, and some optimistic punter even brought his frisbee.

The only slight hiccup happened at around 2.30pm, when the festival’s sole entrance gate turned into a complete shambles. There were hundreds of punters squished together and unable to enter due to an apparent issue with mobile ticketing. Some people who’d potentially gone too heavy on the pre-loading didn’t cope with the heat, and had to be aided by other crowd members with water and fans.

But everyone got in eventually! Here are the RNZ Music team’s takes on the bands they saw. 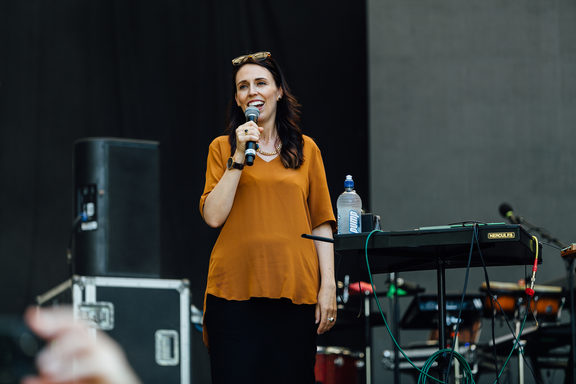 I bet D.D. Dumbo’s never been introduced by the Australian Prime Minister before, and yet here was Jacinda Ardern opening proceedings on the Princess Stage, just before the Aussie musician began his set.

She reminisced about the time she DJ’ed at Laneway and reminded us how important music and the arts are to the government, before welcoming the ARIA album of the year winner to the stage.

His band very deftly and faithfully interpreted songs from his album Utopia Defeated, taking on bass clarinet, chimes, synths, bongos and even a pvc pipe. Oliver Perry (D.D. Dumbo) played 12 string guitar, flute, and clarinet, but it was his agile, yelping voice that stood out.

It was a beautiful and energetic start to the day. - Kirsten Johnstone 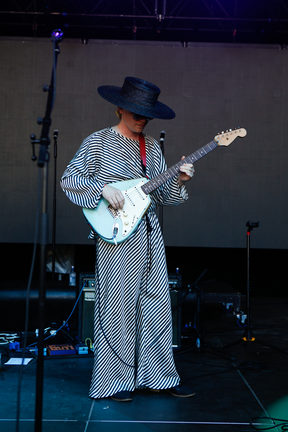 First off, the outfit: He took the stage in a billowing striped onesie and a Stevie Ray Vaughan-esque hat. Connan actually made a joke about it later in his set, “I’m the Hambugler – can I take your order?”

His smooth sunny-sounding tunes were perfect for the 5pm time slot. Albert park formed a natural amphitheater around the Fountain stage, which meant, despite being five-foot-nothing, I could see everything, which was a real treat.

Molly Lewis, who’s possibly the world’s most incredible whistler, and who’s been touring with Neil and Liam Finn for the last few weeks, took the stage for ‘It’s Choade My Dear’, which the crowd seemed to love.

John Carol Kerby was great on keys, which sounded like a melodica one minute and a harmonica the next. And the sound was excellent too.

Connan’s dad even took the stage and covered ‘My Guitar Gently Weeps’, which was great fun! - Alice Murray

I’ve seen Aldous Harding half a dozen times now and I’m accustomed to the face contortions, the rolled back eyes, and awkward posturing, so I love watching other people’s faces to gauge their reactions to her, which are always that of surprise, amusement but also adoration.

She clearly has loyal fans who know her songs intimately, and they’re hungry for new ones, two of which she played at the end of the set. - Kirsten Johnstone 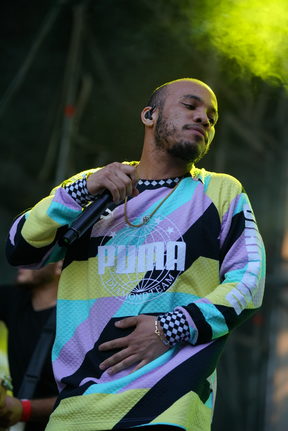 Anderson Paak’s set was met with much anticipation with some fans having waited for up to an hour and a half at the festival’s Rotunda stage to see him. He did not disappoint, delivering a high energy set with the crowd singing along to most songs word-for-word.

He and his band The Free Nationals played most of Paak’s breakthrough album Malibu, which went down an absolute treat. His material translated comfortably into a live set, where songs were familiar but still dynamic.

The set was peppered with songs from NxWorries - Paak’s collab with fellow LA native and hip-hop producer Knxwledge, and Paak got behind the drums a few times, much to the crowd’s delight.

The only thing that could have been better was the sound. It was bit muddy. A similarly muffled bass-heavy mix had affected the Internet, who’d played just before Paak, also on the Rotunda stage. - Yadana Saw

Slowdive certainly aren’t a band trading on nostalgia - it seemed to be their new material that got the biggest reaction from the crowd. They’re not known for their stage presence but are obviously a super-experienced band. They filled out the sonic space nicely, often creating a kind of post-rock wall-of-sound. - Kirsten Johnstone 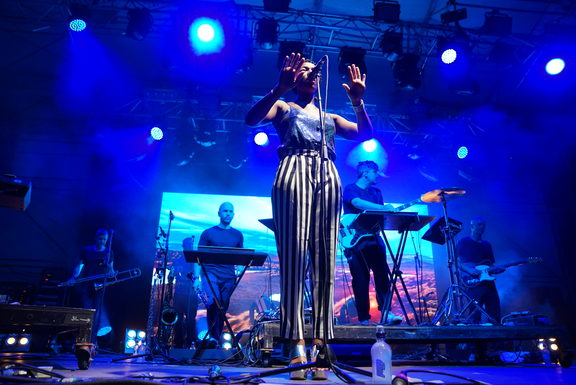 Bonobo was a straight out bass-heavy party! Simon Green (Bonobo’s real name) is a brilliant frontman, at times playing the bass, keyboard/samplers and percussion at the same time.

He had a bunch of musicians on stage playing drums, trombone, saxophone, trumpet and even flute, as well as his regular singer Szjerdene. And there were trippy visuals - the best of which were spectacular images of molten lava.

It was great fun dancing along to bass-heavy beats (bordering on 90s techno at times!) while enjoying the lovely smell of freshly cut grass.

The slight downer was that – again, the sound was a bit muddy, with vocals occasionally getting lost. It seemed to be a problem that affected many of the bands that played on the Rotunda stage, but certainly not to the point of ruining them. - Alice Murray

The War on Drugs

These guys gave a triumphant performance to round out the festival. The crowd was absolutely loving it - reacting with an almost Pentecostal fervour. With tinges of glam rock and points where singer Adam Granduciel seemed to be channelling Dylan, The War On Drugs were the perfect way to finish off another great Laneway. - Alice Murray

Mobile users: click on an image, then swipe right to scroll through the gallery.