Melbourne trio Camp Cope on standing up for gender equality

The three members of Camp Cope have been fighting sexism in the music industry since they formed in 2015, while all the while creating unique and well-crafted music. Drummer Sarah Thompson talk to Jana Whitta ahead of their Auckland show. 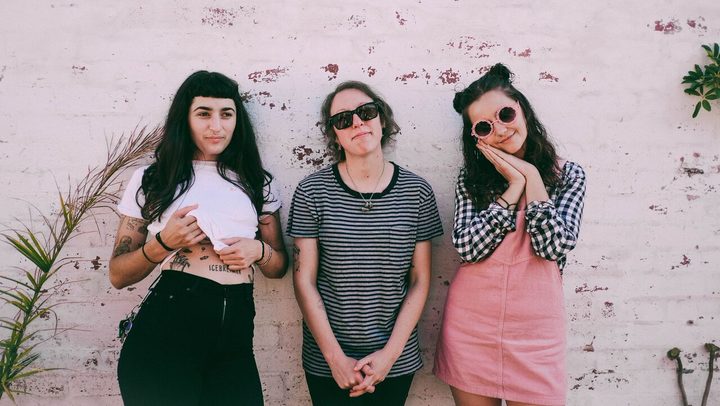 Since first appearing on the Melbourne music scene in 2015, Camp Cope have taken a fearless approach to standing up against sexism, inequality and the many other wrongs they’ve witnessed and experienced as non-males in music.

Their approach has – of course, drawn backlash from within the music scene, and from the media.

It’s with this in mind, I start our interview by asking drummer Sarah ‘Thomo’  Thompson if there's anything she does or doesn’t want to talk about. Her response: “Nah, you can ask me whatever you want, you’re not on my list of media outlets that I hate, so you can go for your life.”

And there’s a long list of them, from all over. Media outlets finding fault with the smallest things, or creating stories out of trivialities: “We get so overly criticised, comparatively, I mean I can cough and someone in the Australian music media will write a story about how I didn't cough correctly,” says Thomo.

The band’s story begins as you might expect: three people meeting through the local scene, then jamming together. But look deeper and it’s apparent Camp Cope came together as a group of fierce like-minded women, fed up with the current situation in the music scene, seeing the same things happen over and over again, and wanting a change.

Whether it's creating safe spaces; calling out the lack of female representation on gig line-ups or the exclusion of people of colour; or just simply pushing for people who aren’t straight white men to be represented and respected in music.

"We felt our peers – men in bands, were sort of given things so quickly that we had to kick and scream and fight ten times harder just to get what they got handed straight away," says Thomo.

During last year’s Falls Festival tour, the band took a series of actions as they made their way across Australia, in response to inequality and sexual assault.

There had been reports of assaults taking place at the festival, and the band felt the systems the promoters had in place weren’t good enough. Late one night bassist Kelly-Dawn ‘Kel’ Hellmrich came up with the idea of making T-Shirts with a message. She said she wanted it to be ‘simple’ and ‘harsh’.

By the end of the festival, almost all the artists performing wore the shirt on stage. Its message said: “The person wearing this shirt stands against sexual assault and demands a change.” 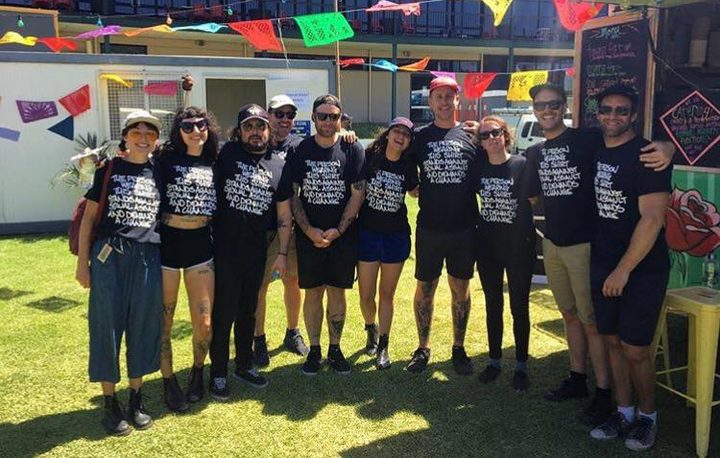 Camp Cope and other acts wearing the T-shirts they had made during the festival. Kelly wanted them to say something simple, but harsh. Photo: Courtesy Camp Cope Facebook

The band also called out the promoters of the festival for the lack of women, non-binary and people of colour on the line up, and for putting the few women performers on the smaller stages.

During a set played to a full, heaving tent of fans, singer Georgia ‘Maq’ MacDonald changed the lyrics to their song 'The Opener’ to:

It's another man telling us we can't fill up a tent / it's another f****** festival booking only nine women.

Perhaps all this attention on the band’s fight for equal rights obscures the fact they’ve been writing unique and well-crafted songs since their inception in 2015. They released their self-titled debut in 2016, and follow-up How To Socialise And Make Friends earlier this year.

Their latest offering kicks off with the aptly named song ‘The Opener’, which begins with simple but effective guitar and bass, then hits you with the raw talent of singer and main songwriter Georgia’s unique voice. Her voice frequently moves from a soft conversational style to strong screaming, around which Kel’s duelling basslines dart. All of this is centered by Thomo’s precision drumming.

The album couldn’t have come at a better time: the #MeToo movement had begun, bringing an influx of support for women speaking out against sexual assault. It made the band – particularly Georgia, feel more comfortable about releasing the album, which contains material about her own sexual assault.

Georgia’s discomfort wasn’t about speaking up, it was about people not believing her story, but as bandmate Thomo says, “After the whole #MeToo thing, we all just felt so much better about releasing songs like ‘The Face of God’ [and] ‘The Opener’ – people can relate to it.”

This new awareness led to Camp Cope having a party as part of the #MeNoMore movement – a campaign that focused specifically on the stories of people in the Australian music community.

Camp Cope’s trajectory over the last three years reflects the hard work and commitment they’ve put into their band and the music community, that is perhaps taken for granted.

“I’ll just sleep later. It feels like we’ve been a band for a really long time in some ways, but it also feels like the shortest amount of time ever.” – Georgia ‘Maq’

The 0800LANEWAY helpline at this year's Laneway Festival was a result of their campaign for safe spaces at Laneway Australia. The campaign aimed to show that it’s ok to stand up for injustices, create safe spaces and call out lack of inclusion at gigs.

It also showed just how much you can achieve by being strong-willed and not allowing others to silence you. It showed that if you speak up, someone will listen.

We should all applaud Camp Cope for the changes they’ve made to music already, and the foundations they’ve laid for the future of music.

Lyrics to 'The Opener':

It's another all-male tour preaching equality
It's another straight cis man who knows more about this than me
It's another man telling us we're missing a frequency, show 'em Kelly

Yeah, just get a female opener, that'll fill the quota