Auckland's Laneway festival is returning to Albert Park on Monday, 28 January with acts including Florence + The Machine, Courtney Barnett and Parquet Courts. 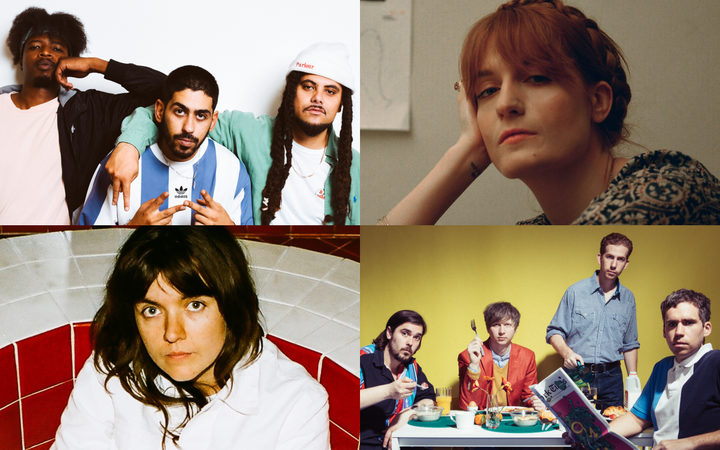 Laneway has for the first time included in its press release a chart showing the percentage of acts that include women. 45 percent of next year's acts have a permanent member who identifies as female, according to the press release.

Florence and her band of English indie rockers need no introduction. They blew our socks off at Laneway in 2010 and we can't wait to see them again!

One of the most distinctive and compelling voices in indie rock, the Melbourne singer-songwriter has shot to stardom with her unique style of slacker rock, collaborating with The Breeders, Kurt Vile and Jen Cloher along the way.

REVIEW: The Sampler - Tell Me How You Really Feel by Courtney Barnett

Dunedin noise trio The Dead C have been around since 1987. This is a rare show from a band widely regarded as one of the most influential groups to ever come out of New Zealand.

Read more about The Dead C at Audioculture.co.nz

Melbourne three-piece Camp Cope released their second album How To Socialise & Make Friends this year, and it’s an uncompromising feminist statement. The band helped Laneway set up its safety hotline 1-800-LANEWAY too!

Three of the brightest talents in the NZ’s new generation of hip hop artists have joined forces to create High Beams: producer Illbaz and rappers Melodownz and Raiza Biza.

The group collaborated with the all-star line-up of Teeks, Che Fu, Dirty (of Eno x Dirty) and High Hoops to create an album that reflects their experiences of living here in New Zealand: “With Baz being from Palestine, myself being from Rwanda, and Melo being Polynesian, we see and deal with these issues daily,” says Raiza Biza.

Wellington songwriter Lontalius has been living and recording in Los Angeles for the last two-and-a-half years, making music with Grammy Award-winning producer Om’Mas.

At just 16 years old, American pop star Billie Eilish’s Don’t Smile At Me EP has been streamed over a billion times. Locally, it’s held its place in the NZ Top 40 Album Chart for 35 weeks and counting.

At just 21, UK-based R&B singer-songwriter Jorja Smith is an in-demand collaborator, who’s worked alongside Drake for his More Life project and Kendrick Lamar on the internationally acclaimed Black Panther soundtrack.

You might have heard 20-year-old English crooner Alex O’Connor on Tyler the Creator’s Flower Boy album, or on his own beautifully earnest singles ‘Loving Is Easy’ and ‘Best Friend’.

Miss June is a local four-piece who play high-energy punk. The group has been described as “some unholy union between Sonic Youth and Le Tigre”.

The Sydney five piece have won four ARIA Awards: Best Group, Best Rock Album, Producer Of The Year and Album Of The Year for Go Farther in Lightness.

From Grey Lynn via Morningside, 18-year-old Bene mixes indie-slack fun with a little R&B swing. And a voice to die for. She’s currently recording at Morningside’s Golden Age studio with producer Josh Fountain of Leisure.

Cosmo’s Midnight are an electronic due – who also happen to be twins – from Syndey’s inner west.

This South Florida rapper is known for his sharp lyricism and deeply personal storytelling.

DJDS is a Grammy-nominated production and DJ project that cut their teeth at underground warehouse parties in Downtown LA. They create dancefloor-filling, ‘instantly addictive’ singles.

Championed by the likes of Pitchfork, the New York Times and others, Ravyn Lenae is a funny, fierce and a vital new voice within contemporary R&B.

Chicago’s Smino creates a soulful mix of funk and hip hop inspired by Kanye West and Andre 3000. He’s toured with with SZA and T-Pain.

Reminiscent of an early Mac DeMarco, the UK-born artist’s song ‘Gap In The Clouds’ recently featured on the trailer for the Donald Glover (Childish Gambino) series Atlanta.