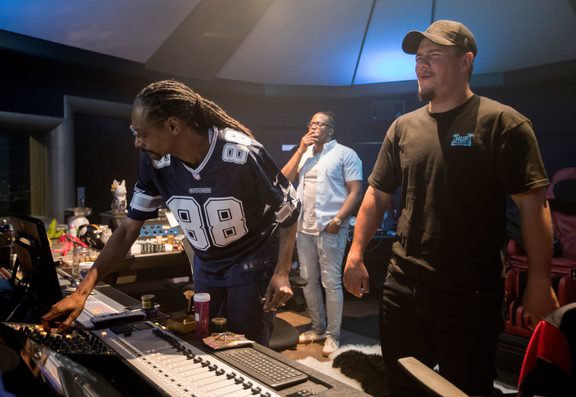 Yesterday young Hawkes Bay rapper Tom Francis released a song Lifestyle which features the one and only Snoop Dogg. It’s a long way away for the 23 year old who funded his hip hop career by selling firewood.

There’s so much new music - luckily Kirsten Johnstone and her guests are here to sift through the offerings - here is Songcrush.

Kirsten Johnstone sat down with Tiny Ruins’ Hollie Fullbrook to talk about the stories behind the songs on their new album Olympic girls. They started with the title track.

Aussie hip hop institution Hilltop Hoods are about to play a sold out Westpac Stadium in support of Eminem. They’re going to swing into the studio ahead of their show tonight.

A Place to Bury Strangers bassist Dion Lunadon chats to RNZ Music's Tony Stamp about their forthcoming gigs in his home country NZ.

British duo Sleaford Mods have been serving up "electronic munt minimalist punk-hop rants for the working class" since 2007, across more than ten albums. Andrew Fearn makes the music (replacing Simon Parfrement in 2012), and Jason Williamson deals with the words, delivering eloquent tirades about austerity, unemployment, and whatever else takes his fancy.

Their acerbic approach propelled them into the spotlight via an appearance on Jools Holland, collaborations with The Prodigy and Leftfield, and a series of acclaimed albums.

Originally from Auckland, Isaiah B Brunt, a former Darling Harbour studio owner had a successful career in the studio business working with a number of key Australian artists.

But Isaiah’s life long passion for the blues was always simmering in the background. He dusted off his father’s 1950’s custom lap steel guitar and embarked on the hard road playing his own original material that has seen him release 3 albums and tour Australia, Aotearoa and America.

Drummer & Percussionist: Bruce Aitken, originally from Invercargill and part of the Southland Music Hall of Fame recently joined the band and together the Isaiah B Brunt trio are embarking on a North Island tour playing 22 dates over March / early April 2019.

For the RNZ Music Mixtape Teresa Patterson curates an all-female playlist ahead of the Milk and Honey Festival. She speaks with Yadana Saw about her life as manager and organiser behind some our favourite local acts.

As a teenager growing up in West Auckland Teresa Paterson was a music obsessive. She went on to carve a career in the industry record labels, PR and band management - looking after acts like Six60, The Have and Salmonella Dub.

This year, she and Elemeno P's Lani Purkis have joined forces to launch the Milk and Honey festival.

She speaks with Yadana Saw about her time in the music industry and why a festival like Milk and Honey is needed.

Artist: A. Swayze & The Ghosts

Song: I Believe in You

Artist: A Place to Bury Strangers

Song: Big Burt, Policy Cream, Kebab Spider, When You Come Up To Me

Song: A Moment In Time

Song: Before You Lay Me Down

Song: May I Dance With You

Song: Never Give Up