The Black Lives Matter movement has prompted many institutions - including media - to re-examine their own record on race and diversity.  Four years ago RNZ made a long-term commitment to high-quality Māori content, te reo Māori and Māori journalism after criticism that it wasn't offering enough. Mediawatch asks chief executive Paul Thompson what RNZ’s achieved and what’s still to do. 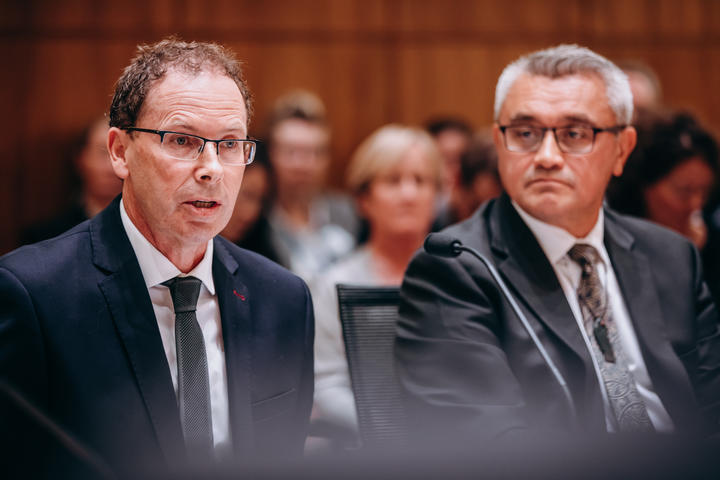 In an interview on RNZ’s Midday Report on 4 June the chair of a Māori-led inquiry into Oranga Tamariki, Dame Naida Glavish, got stuck.

She couldn’t find the right words in English. The show’s host Māni Dunlop pivoted, and invited her to switch to te reo Māori.

Dame Naida's words started to flow. She spoke for a minute or so before switching back.

It’s an exchange that probably wouldn't have taken place on RNZ eight years ago when, as an intern, Māni Dunlop was censured for signing off a report “in Tāmaki Makaurau” instead of “in Auckland”.

In 2016 Radio Waatea’s chief executive at the time - Willie Jackson - condemned RNZ for the low level and range of its Māori content and accused RNZ of sidelining of Māori and Pasifika voices.

“You’re more likely to hear a bird before a Māori presenter. In 91 years on this station, (RNZ) has never had one frontline Māori presenter,” he told RNZ’s then-head of content Carol Hirschfeld on Mediawatch.

“It’s an indictment on this organisation and that is an example of institutionalised racism in this country because they have clearly preferenced Pākehā culture over Māori culture,” said Willie Jackson, who is now associate minister of Māori development.

“Some of the criticism arising from it (is) ill-informed but ... the main thrust of Jackson's argument has merit,” he said.

Soon after, he unveiled a strategy signalling “a long term commitment” to Māori news journalism and te reo Māori.

It promised to promote the use of te reo across RNZ’s platforms, introduce a Māori journalism internship, and employ outstanding Māori staff in key roles.

Four years on, te reo Māori is now heard on more RNZ programmes. The Te Manu Korihi reporting team features in the news output and in Morning Report and Checkpoint each day and on weekly show Te Waonui on Sundays.

But Māni Dunlop is still the only Māori person hosting one of RNZ’s daily news shows. Until Indira Stewart started as the host of First Up in May, 2019, RNZ had never had a weekday show host who identifies as Pasifika.

RNZ still doesn’t have a Māori or Pasifika person fronting any of its flagship daily news and current affairs slots - Willie Jackson’s chief criticism back in 2016.

Market research commissioned ahead of its controversial plan to launch a youth radio station this year - which would have replaced RNZ Concert on its FM frequency - found more than 90 percent of RNZ National and RNZ Concert’s audiences are ‘NZ European’.

The single-biggest group listening to the two stations is Pākehā people aged 70+. 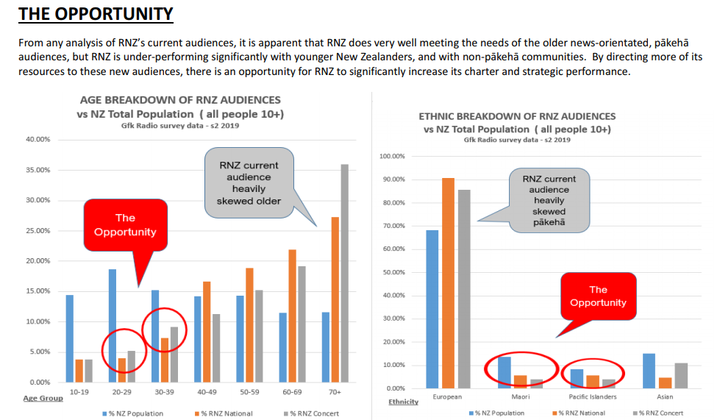 A chart from a business case for a proposed youth network at RNZ. Photo: screenshot

Some of these figures raise the question of whether RNZ is truly fulfilling its charter obligations to reflect New Zealand’s cultural identity, and honoring its commitment to diverse voices.

That’s a particularly pressing question right now, as the Black Lives Matter movement has prompted institutions all over the world to examine their record on racism and diversity - within their ranks and in their output.

It has already caused self-reflection at NZME’s flagship publication The New Zealand Herald, prompting the Herald’s editor to say “We will do better.”

If about 70 percent of the population is classed ’NZ European’ but the same group makes up almost nine out of 10 of RNZ’s radio listeners, is RNZ doing enough to represent all New Zealanders?

“When you’re talking about our listeners to our radio stations, they skew more Pākehā and older, definitely,” he said.

Thompson pointed out that 59 percent of New Zealanders - including 57 percent of people aged 18 to 34 - now consume RNZ content each week through its radio stations, digital content and third-party content sharing arrangements with other media companies.

"Our strategy is starting to give us some more diverse audience,” he said

But he acknowledged under-served Māori and Pasifika people and Asian people weren't getting as much value for money as they should from publicly-funded RNZ.

"The strategy is getting us some of that diversity but there’s much more to do. The quality of the content for those audiences is very high and that’s available to all people but ... we can’t just sit there and say: ‘Well, it’s too hard to look to adapt to new audiences and new ways that they want to consume content’. You need to do new things."

One of those "new things" was the youth network Thompson proposed in February. It was billed as an effort to serve younger, Māori and Pasifika audiences.

That’s on hold after the public and political backlash over cuts to RNZ Concert - and the disruption of Covid-19.

“I think the interesting thing about the RNZ Concert controversy was that the government’s position was that RNZ needs to be there for all audiences, older and younger, and they invited us to talk to them about the options around those frequencies which are tagged for youth radio in New Zealand. That invitation still stands but Covid has since intruded,” said Thompson.

Willie Jackson’s not the only politician who has confronted RNZ about Māori voices on air in recent times.

“But It would be really great to have a Māori in that role,” she said.

However, he pointed to Dunlop's use of te reo and integration of te ao Māori into Midday Report, and the increasing prominence of the work of RNZ's Māori news team across all news bulletins.

Jim Mather, the former chief executive of Māori Television, is also bringing a strong Māori perspective to his new role as chairman of RNZ, he said.

“I talked at the time about taking baby steps in this regard. We’re now taking toddler steps. We’re going to be making sure we make bigger strides in the next few years," Thompson told Mediawatch.

Thompson said RNZ was in the process of carrying out a stocktake of all its staff to figure out how its recruitment and retention policies could help the organisation better reflect the diversity of New Zealand.

"It’s not going to happen quickly, but we think it’s really important," he said.

Could it happen quicker though? Thompson said part of the reason for the continuing "toddler steps" was his desire to make sure changes are sustainable long-term.

“It’ll go in a way where we make sure we lock that capability in and it’s lasting and enduring. It’s around every part of the organisation. It’s the senior ranks. It’s the managers - and it’s making sure they represent and reflect all of New Zealand’s population."

RNZ may also have to look at where its staff are located as it seeks to elevate Māori, Pasifika and other diverse voices.

Though it's a national broadcaster, its presence is limited outside Wellington, Auckland and Christchurch.

It doesn’t have people in places like Whangārei, where long-serving reporter Lois Williams had deep local knowledge and connections for many years. There are no RNZ journalists in - for example - Tairāwhiti, the East Cape and other places where Māori people live.

“I would absolutely love to build out a stronger regional network if we get an opportunity to do so. It’s been a theme of our discussions around budget bids with the government in the last couple of years,” Thompson told Mediawatch.

“We have been the driver - along with the publishing industry - of the Local Democracy Reporting Service, which has put eight reporters into regional newsrooms and that is now going to almost double to 14 in the next 12 months."

RNZ's efforts to increase its diversity, and better reflect New Zealand, aren't without their detractors.

Espiner’s use of te reo on Morning Report was criticised by some people - and cuts to RNZ Concert to get a youth network off the ground met fierce resistance from its loyal listeners.

Does the prospect of pushback from RNZ’s mostly older, Pākehā audience put a brake on these changes?

“I don’t think it’s a factor at all. There’s always a tug of war in every media organisation between the existing audiences who you need to look after and cater for and new audiences in the context of changing demographics, aging audiences. You always have this tug of war between continuing to do what you do well and looking to do new things,” Thompson said.

“We are striking a balance between those two things and it’s never easy. It’s something you get up every day and think about again and work on again."