Forcing the issue of race at the Herald

The Herald recently published a column which criticises its own record on race. Teuila Fuatai explains why she felt she had to call out the paper that commissioned her.​ 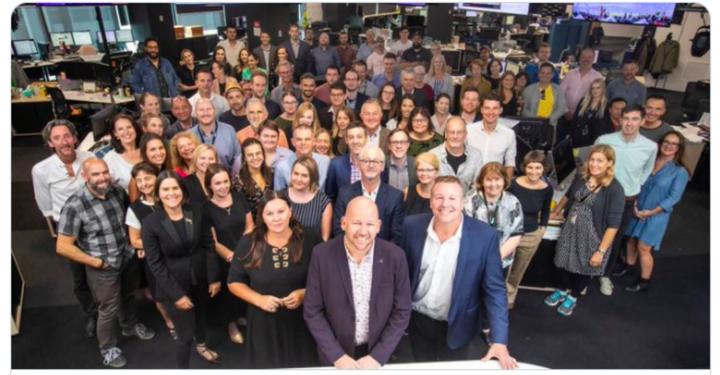 A promotional image from NZME showing editorial staff at the Herald Photo: NZME

On Monday the Herald carried a surprising headline: ‘Why I found it so hard writing about racism in New Zealand for the Herald’.

In the column, journalist Teuila Fuatai detailed her concerns about the Herald’s record on race and her efforts to raise those with her editors.

It wasn’t what she was originally commissioned to write.

Her editors had asked for an article about racism in New Zealand more generally, covering systemic issues in institutions like Oranga Tamariki, the police, and the justice system.

Fuatai says she started out trying to follow that brief before a conversation with the New Zealand organisers of Black Lives Matter left her feeling she couldn’t follow through on that brief without addressing the Herald’s coverage first.

“I suppose it was just a week after the first protest march in New Zealand and I thought they’d be a great group to speak to as an anti-racism group,” she says.

“It changed when they basically said they didn’t want to talk to me because the Herald and its coverage was racist and upheld structures of white supremacy.”

The criticism was hard to hear, but Fuatai agreed with the organisers.

The Herald has been criticised over its coverage of race in the past, notably when it published a 2012 column by Paul Holmes calling Waitangi Day a “complete waste” and in 2014 when it printed a white fist on its masthead along with a promise its Waitangi coverage would be “protest-free”.

However, the Herald has responded to the Black Lives Matter protests with examinations of racism and colonial legacies in New Zealand - among them, the piece Teuila Fautai was asked to write.

In late June for example, Herald Māori affairs reporter Michael Neilson looked at "a local dispute about trees, which for many is about much more than just trees” under the headline: How Ōwairaka/Mt Albert tree protest became a flashpoint for racism, colonisation debate.

Nielsen has also written in depth about the ‘statues issue’ under the explicit heading ‘George Floyd protests and racism.’

Fuatai is now a freelancer, but has been on staff at the Herald, and she says many of the paper's issues with race are structural and systemic.

“I do think that there is a lack of diversity in their newsroom and I do think that we’ve seen, publicly, problematic coverage pointed out - both recent and historic,” she says.

“From my personal perspective I think that we operate in inherently racist structures. So for the Herald to not be like that - it would be an outlier.”

Fuatai went back to her editors offering to write an assessment of the Herald’s coverage of race.

She cited the example of National Geographic which carried out an audit of its history of racist reporting in the leadup to Martin Luther King day in 2018.

That sort of harsh self-reflection is taking place in an increasing number of news organisations around the world, as journalists are called on to re-examine their treatment of race in light of the Black Lives Matter movement.

In the US, The New York Times underwent a staff revolt after publishing a column by the Arkansas senator Tom Cotton which called for the government to send in the military against Black Lives Matter protesters.

The Times wasn’t alone. A top editor of the Philadelphia Inquirer resigned after printing the headline ‘Buildings Matter Too’ during the Black Lives Matter protests.

Editors at other outlets including Variety, Bon Appétit magazine and the fashion and culture website Refinery29 stepped down under employee pressure.

Some newsrooms have moved proactively to improve their coverage. In a tacit acknowledgement of its own failure to cover the issue adequately, The Washington Post has set up a dedicated unit covering race in the US.

Similar discussions are starting to take place here in New Zealand. Under its new owner Sinead Boucher, Stuff is looking to set up a section devoted to covering Te Ao Māori, the Māori world.

Fuatai says editors need to understand the value in promoting people of colour to positions of influence, giving platforms to diverse voices, and catering content to diverse audiences.

“Understand that in 10 years time, your audience and your readership or your viewers - you want to be right there with them in understanding the issues and the conversations that they’re having. Part of that is looking at the makeup of your newsroom. To do that you have to understand the value in actually diversifying,” she told Mediawatch

Fuatai’s first conversation with a Herald editor ended with her being told to stick to her original story brief.

The column published on Monday was the result of a lengthy editing process.

She’s pleased with the final result, and with the fact that the paper was willing to confront its record in public.

That sort of self-examination needs to keep happening, not just at the Herald, but in newsrooms across the country, she says.

New Zealand Herald editor Murray Kirkness responded to Teulia Fuatai’s column on Monday with a statement of his own.

“Being accused of racism is a difficult pill to swallow,” he wrote.

“But it would be reckless to dismiss it and say, 'not on our watch'. We accept the criticism and accept we must do better.”

“We cannot agree with Black Lives Matter's refusal to engage with Teuila Fuatai. For what hope is there without debate? What future without striving for a shared understanding?

“But we can understand their insistence that it is not that group's responsibility to educate the Herald. No victim should carry that burden,” he wrote.

Kirkness said the Herald’s publisher NZME - which also owns half the country’s radio stations - is committed to accountability and monitors diversity of voice. It formed a diversity and inclusion committee in 2016 overseeing all the company's media outlets, he said.

“We hope we can be agents for change across society — a role the Herald has fulfilled for more than 150 years,” he wrote.