Trained actor and doctor Thomas Petschner combined his skills to form Clown Doctors. It’s a programme providing comic relief to patients in hospital.  The programme has been running in Auckland and Christchurch, and now with the help of The Museum Hotel, it’s been made possible in Wellington. Sonia heads along to the audition.

John Reid talks about the man who made an impact not only in theatre, but also in NZ film and television.

Sunset Boulevard may well be one of the greatest films of all time. Mark Knowles offers his two cents.

1:35pm  A Second Life: The importance of developing New Zealand productions beyond their first outing

Simon Morris finds out what’s tickling the comedienne’s funny bone ahead of the NZ Comedy Festival.

Author and freelance journalist Ann Packer discusses her crafting memories and shares some top tips from her travels across the country on the release of her book: Crafty Girls Road Trip.

For five hundred years, letterpress printing ruled the roost. But as newer and faster methods threatened to send it the way of the dodo, a craft movement sprang up to save this most beautiful form of printing. Justin Gregory went along to Auckland’s Magpie Press to meet printer Shona Gow and her Heidelberg Windmill Letterpress, called Hildegard. 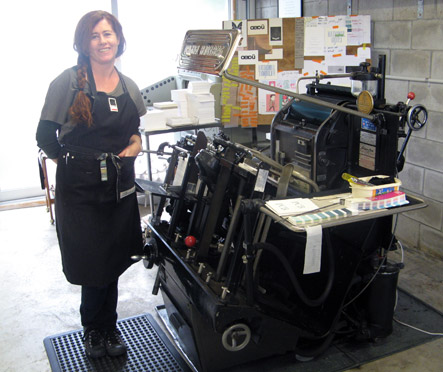 John Coley emerged from a stimulating bohemian era, recalling 22 Armagh Street in the 1950s as a place where he and his young creative cohorts gathered together to write manifestos and challenge the boundaries of what lay before them. He discusses the significance of this period on his work, his experience with visual impairment, and why it’s important to connect with an audience, ahead of his exhibition Nightlights.

The second parts of two productions that illustrate the range of writing and performance being produced in audio drama.

The Moehau written by Gary Henderson (Part 2 of 2)