A collection of 254 tapes spanning the career of Flying Nun musician Chris Knox is set to be preserved by the Alexander Turnbull Library in Wellington.

Knox was at the forefront of the Dunedin, then Auckland Flying Nun music scene in the late 70s /early 80s, performing with The Enemy, Toy Love, Tall Dwarfs and solo, as well as mentoring and contributing to many other projects. He recorded many local bands using an early 4-track tape recorder bought with a small inheritance, designed posters and album covers, made experimental music videos, all with a proudly low-tech aesthetic, and carried the records by bus and on foot to retailers around Auckland. Knox was also an arts commentator and cartoonist. Since having a stroke in 2009 he has returned to painting - teaching himself to use his left hand - and makes occasional live music performances.

The archiving project is a collaborative effort between the library and the Flying Nun Foundation, and is the result of more than a year's work digging through Chris' immense personal collection.

Here's the story so far, in punny, comic form, by Ian Dalziel, designersaur of Chchch 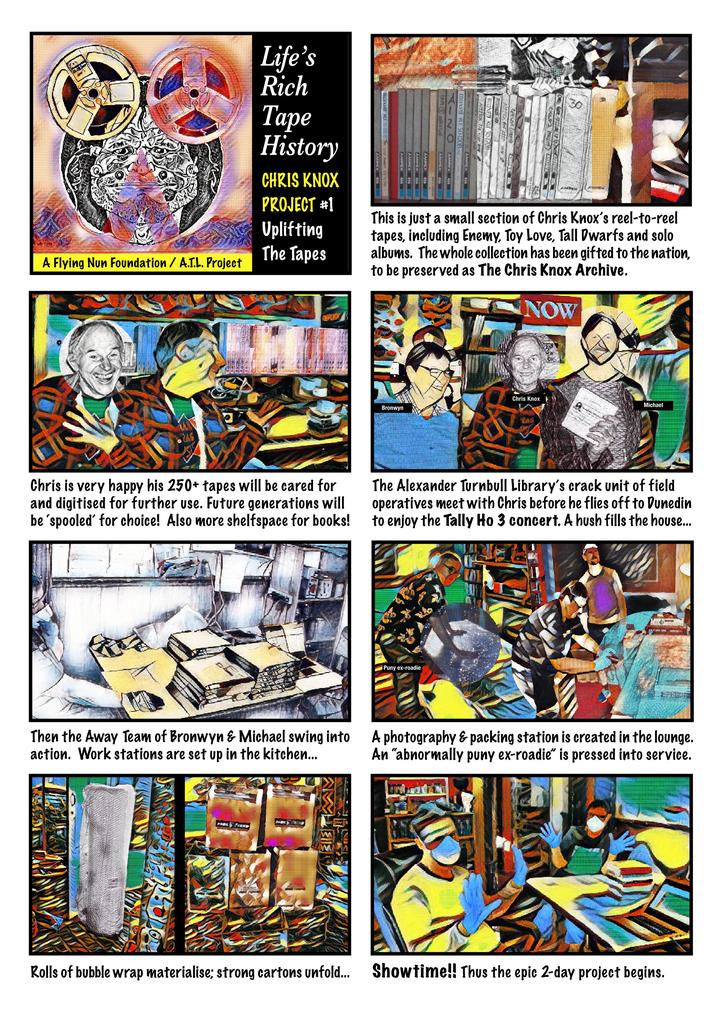 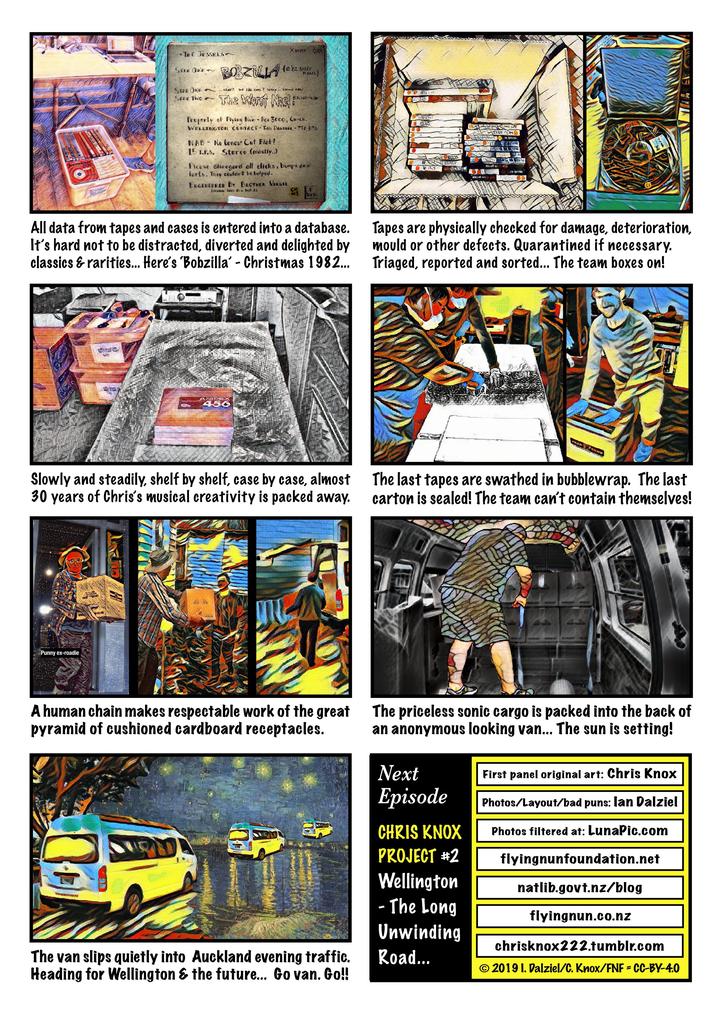 "Chris is pleased that his tapes are going to be looked after and their content digitised," says Foundation board member Barbara Ward. "We are lucky that Chris kept the majority of his recorded output at his home where much of it was recorded and that this collection will be kept together and accessible." "This project has been possible because Chris kept so much," says Foundation chair Caroline Stone. "The past year's work has been about going through all the material, cataloguing it and checking its condition. "This isn't always an easy job - tapes were often re-used and a box with one label might contain something quite different. So, we were very lucky to have Foundation member Ian Dalziel there to do that crucial initial work. Ian is not only meticulous, he was alongside Chris for many of those years - not least as a roadie for Toy Love - so he was able to pick up and understand things others might not."

The Chris Knox project is important not only because it preserves this body of work for the ages, but as a significant step towards one of the Foundation's key goals - to establish relationships and practices with major archival institutions so that other holders of Flying Nun heritage material will find it easier to donate their own collections, if they choose. "Not everyone will choose to donate," says Stone, "so we're also here to provide advice on storage and preservation of this kind of material in the community. But we can say that our own dealings with the Turnbull have been great. Their people really get this, and they understand the importance of these collections. They're as enthusiastic as we are!"

At the Alexander Turnbull Library the tapes will be preserved over the next three years and, where necessary, restored. The recordings on them will be digitised and part of the agreement with Chris and his family is that the high-quality digital versions will be available for future releases.

People will be able to listen to and research the recordings at the Library. In 2018, Flying Nun Records donated many hundreds of master tapes from recordings made between 1981 to the mid-2000s, to the Turnbull Library's Archive of New Zealand Music.

The Archive of New Zealand Music at the Alexander Turnbull Library was established in 1974 by composer Douglas Lilburn and contains the largest collection of archival material relating to New Zealand music and musicians. It sits alongside the largest public collection of published New Zealand and Pacific recordings, also in the Library's collections.