1. TV review - Irene Gardiner looks at some new shows on terrestrial television
2. Books - Wendyl Nissen reads "The Monogram Murders" and "We are All Completely Beside Ourselves"
3. Music - Zac Arnold with music from Nigeria and North America
4. Web - Steve McCabe checks out List25 and Seat Guru 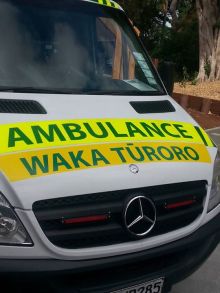 A trial has been initiated in Gisborne to introduce the first bilingual, Māori-English, signage on emergency service vehicles. The make over of ambulances and fire engines was introduced by the Maori Language Commission, Te Taura Whiri i te Reo Maori. Dr Wayne Ngata is from the commission.

2:20 Literacy app - Yolanda Soryl
A Christchurch-based literacy expert has developed what could be the first New Zealand-accented phonics app. The app is a resource for teachers to help New Zealand children learn to read and write. Yolanda Soryl has spent two years developing the app for tablets and smartphones, after teachers became frustrated with foreign accents on their teaching resources. And found the accent issue could be one reason children are having problems, particularly with spelling with literacy

Ches puts his defence case to the appeal judges and nine weeks later get the verdict. A new trial is ordered

They can be moody, messy and irresponsible, to the point where at times you may wonder what happened to those loving little children you once knew. Anyone who's had a grumpy teenager in the house knows this can be perhaps the toughest time to be a parent.  Dr Frances Jensen is a neurologist and professor at the University of Pennsylvania Perelman School of Medicine.  At times she struggled with two teenage sons, and she turned to science for some answers.  And she shares those answers in a book called The Teenage Brain: A Neuroscientist's Survival Guide to Raising Adolescents and Young Adults.

Great Barrier Island - or just The Barrier, as it's often known - is a large rugged island guarding the eastern flank of the Hauraki Gulf. It's home to nearly a thousand people - and some rare bird species, including the New Zealand dotterel. This jaunty shorebird nests just above the high tide mark, and when Alison Ballance joins John Ogden for a walk at Awana Bay she discovers they lead quite eventful lives