“So the problem is one of getting the community behind the eradication effort, and they would have to be 100% behind it. And if that was the case I think it would be possible. Expensive. But possible.” Botanist and island resident John Ogden on the idea of eradicating pests from Great Barrier Island. 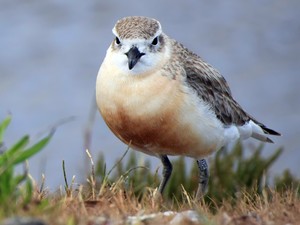 There are just over 2000 northern New Zealand dotterels, and they are found around much of the North Island. Another subspecies now breeds only on Stewart Island. Photo: CC BY 2.0 Chris Gin

The story of Awana Bay’s family of New Zealand dotterels is worthy of a TV soap opera. Retired botanist John Ogden lives nearby on Great Barrier Island and he has been watching the saga of the dotterel pair unfold all summer. First of all, as he tells it, the pair laid an egg in a scrape on the beach just above the high tide mark. Someone else noticed it and reported it to John but by the time he went to investigate the egg had been abandoned. John thinks the person got to close to the nest and scared the parents away, leaving the egg exposed to the hot sun.

The dutiful pair then renested nearby, and then, says John “And this is most remarkable and unbelievable thing. And it’s true. A pair of oystercatchers took over the second nest, and began to incubate the dotterel egg.” Meanwhile the dotterels returned to their original nest and laid another egg, alongside the original dud egg. Then just before Christmas a storm washed away both nests. However after the storm someone saw a dotterel chick on the beach near the estuary, and although John never found it he thinks the second dotterel egg must have hatched just before the storm hit.

The pair of dotterels then nested again, and by early January had a third nest with three eggs in it. John was keeping an eye on it and then just before the eggs were due to hatch there were four very high tides in succession. One tide even lapped around the nest, until finally strong southerly winds combined with another high tide finally washed the nest away. John thought that was the end of the pair’s breeding hopes, until the day before Alison Ballance joins him for a walk, when he notices a tiny dotterel chick running about. John says it must have hatched between the two last high tides, but the other eggs weren’t so fortunate.

As well as carrying out counts of New Zealand dotterels around all the beaches on Great Barrier Island, John, who used to work at the University of Auckland, also monitors his local population of pateke or brown teal, and is still involved in research into vegetation succession on the island following disturbances such as fire.

For many years he was Chairperson of the Great Barrier Island Environmental Trust, and he has been advocating to make Great Barrier Island pest-free. Great Barrier Island, which lies 100 kilometres from central Auckalnd, on the eastern side of the Hauraki Gulf, has ship rats, mice, pigs, rabbits and feral cats, but it does not have possums, hedgehogs or mustelids. Although he says it would be expensive to rid the 285-square kilometre island of pests, John says it is technically possible. The biggest challenge is to get the island’s population, which numbers nearly 1000 people (some permanent residents plus off-island residents with holiday homes) to agree to the plan. 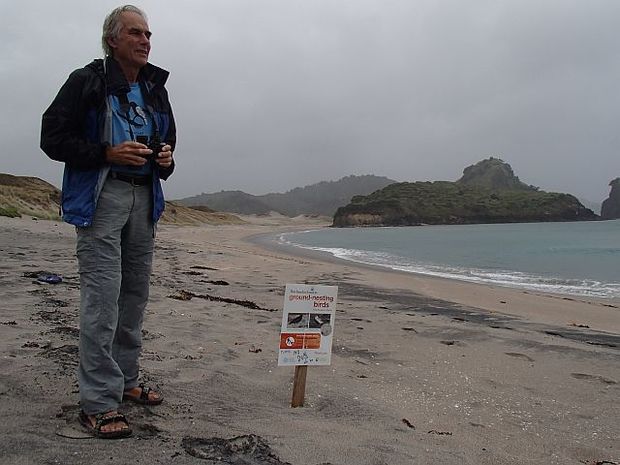