1:25 8 Months To Mars - Our next Mars passenger -  Tom Schnackenberg - the legendary veteran of America's Cup racing.

2:10 The Minimum Wage Challenge - Andrew Mexted-Bragg never knew the price of milk.
And he never paid much attention to how much a load of bread cost. As a young professional on a good salary, the Auckland banker didn't give the cost of living much thought. Having set himself the challenge of living on the minimum wage for the next few months though, Andrew's finding out what life is like when every cent counts. 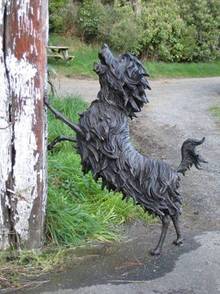 2:20  Hairy Maclary - Brigette West
A sculpture project featuring some of the best loved dogs and cats in New Zealand literature is down to its final fundraising push.
Nine permanent sculptures of  Hairy Maclary and his friends Scarface Claw, Slinky Malinki, Hercules Morse, Muffin McLay, Bottomley Potts, Schnitzel von Krumm, Bitzer Maloney and Zachary Quack have been cast in bronze, and are waiting to be installed on the Tauranga Waterfront, as soon as the last portion of installation costs comes in.
Authorities in Tauranga say they're hopeful Hairy and his friends will be chasing one another along the waterfront by Christmas. Brigette West is the sculptor who brought the characters from Donaldsons Dairy to life.

3:30 Queen Street Noise and Air Pollution Study - Alison Ballance - When you take a walk down Queen Street in central Auckland, how noisy is it - and do you mind that noise? What levels of air pollution are you being exposed to by that bus idling at the traffic lights? Alison Ballance takes a walk to find out how and why all of this is being measured, as part of a large study for Auckland Council to improve conditions for inner city pedestrians.

4:06  Chris Trotter and Tim Watkin are on The Panel - the Labour leadership outcome, the Americas Cup, the fascinating finding about the fillings in your teeth, the University of Edinburgh's stand against song lyrics, the colours banned in our schools and whether we need to take a stand against that.