1:20 8 Months To Mars - International renowned opera singer, Anna Leese is our next passenger to Mars.

2:10 The Backyard Brewer - Brendan Bransgrove - New Zealand's finest home brewer cemented his status on the weekend. Brendan Bransgrove took his second home brewing title at the Beervana competition in Wellington, after winning the Home Brewing champion award at the Society of Beer Advocates competiton in Hamiliton last November. Not bad for a young artist who only had a go at home-brewing for the first time in the back shed last year.

2:20 The Restored 1958 Messerschmitt - Peter Cash - Nelson Classic Car Museum has a new addition. The Messerschmitt 3 wheeler 'bubble car' (below) is one of the iconic automobiles of the early 60's, but Messerschmitt also made a much rarer roadster model as well. Only 200 ragtops rolled off the production line at Messerschmitt between 1955 and 1964, and one of these has found her way to Nelson. She's been returned to her former glory by local restorer Peter Cash. 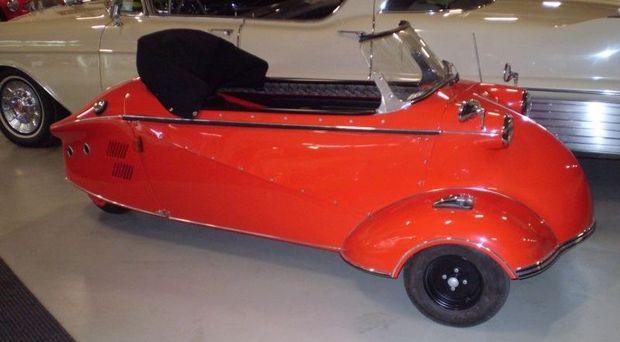 2:30 Reading - Owen Scott finds himself forced to look into his childhood and his father's fragile personality as he struggles to come to terms with the death of his brother in Fiji.  That's in Episode 6 of his book, 'Deep Beyond The Reef'.

3:10 Feature Interview - Writer, Linda Rodriguez McRobbie with her theories expounded in this month's Smithsonian Magazine, 'The History and Psychology of Clowns Being Scary.' The painted white faces, the red lips and the red foamy noses. Clowns are fun for most, but some find them unnerving.

3:30 Otago Peninsula Possum Eradication - Alison Ballance
Otago Peninsula, near Dunedin, is 9500 hectares of farmland, lifestyle blocks and a few scattered settlements. And three years after an ambitious project to eradicate possums from the peninsula began it is now home to 6000 fewer possums than it used to have. Alison Ballance heads out with local farmer Brendon Cross and project manager Rik Wilson to find out what it's taking to create a pest-free peninsula.

4:06 Neil Miller and Catherine Robertson are on The Panel. The killer on the loose and the question again of ease of parole.  Boys in education, again, and why they're not doing as well as girls. The government initiative to get young people into housing, will that work? Your Facebook details summonsed by the Employment Relations Authority, and if you could choose to maximise one capacity in life what would it be? It probably wouldn't be the one we'll talk about, but the one we'll talk about may be the most important one.