Ward and its environs, population around 920.

Leicester Rutledge is a legend of Southland rugby. The former All Black Flanker and Stags team manager played 31 matches, including 13 tests in the black jersey with a secret. At the age of 19 he was diagnosed with epilepsy and was told to give up rugby. A doctor in Dunedin told him to slow down and prescribed Dilantin. But he threw the pills away and went on to play for the All Blacks and 113 matches for Southland, including a famous 10-7 victory over the Wallabies. All the while the seizures continued. Leicester Rutledge never talked about the epilepsy, until now.

Seventy years ago tomorrow, German guns sank the New Zealand steamer, Turakina, just 400 kilometers off the Taranaki coast. She was carrying some 4000 tons of lead, wheat, and dried fruit loaded at Australian ports when the she came across the German raider, the Orion. The Germans ordered the Turakina to stop. But with just one single 4.7-inch gun, the Turakina turned around to fight. 35 men lost their lives, the freighter was sunk and 21 survivors were taken prisoner of war. Duncan Kennedy says too many people have forgotten about the Turakina, and on the 70th anniversary of her sinking, he wants us to remember.

It is critical to prepare students to be able to stand alone as well as part of a group, according to a board member from the total immersion Maori language school in Mangere, Auckland.

Now this week's Art Report with Lynn Freeman and today we hear from Lyric Soprano Madelaine Pierard who is heading overseas.

If you think our land use practices are a recipe for disaster, then Farmageddon is the game for you. More than just a board game, Farmageddon is an immersive tool for learning about farming, development and resource management.

Set inside a rural community in China and played over an entire weekend, the game asks players to grow crops, harvest resources, trade with nearby villages and cope with natural disasters in order to ensure their economic and agricultural future.

The first Farmageddon weekend was held recently in Dunedin.

Sage Forest went along and caught up with the games inventor, Adam Guyton, but not before getting a taste of the kind of tough choices Farmageddon requires.

See images from the weekend. 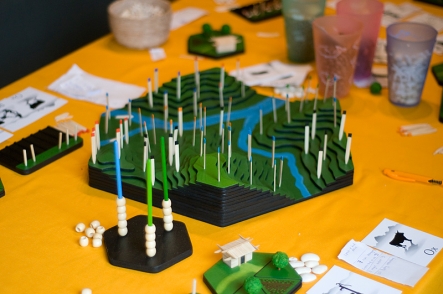