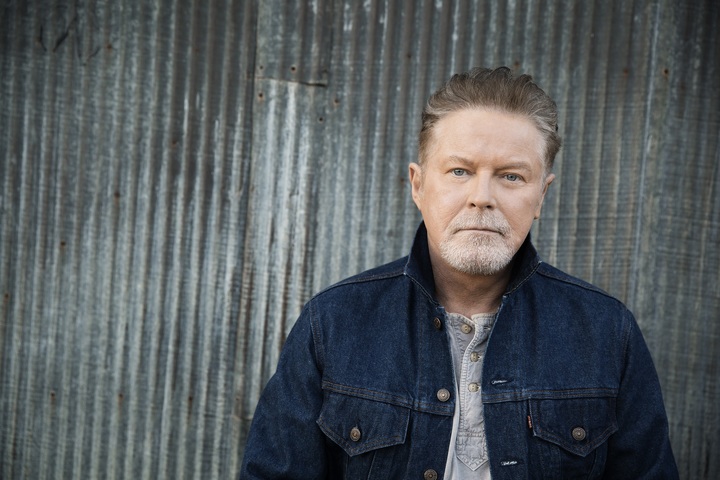 Don Henley was one of the main songwriters, singer, drummer and founding member of the Eagles before launching his successful solo career. In March Henley is bringing his band to New Zealand. Trevor Reekie gets a history of Don Henley through song.

As a member of The Eagles, Don Henley co-wrote and sang lead on some of the most iconic songs of the late 20th century; ‘Life In The Fast Lane’, ‘Desperado’, and ‘Hotel California’, among others.

But the origins of his songs can be surprisingly domestic. “I tend to write when I’m doing menial chores around house. Unloading the dishwasher, doing some gardening, changing light bulbs. They’re little Zen meditations, because you clear out all the clutter and the humdrum that’s coming at us from every direction. So when I’m doing a simple task like that and focussed on it, the clutter clears out and the creative part can come in. I’m not sure where it comes from but I’m always glad when it shows up.”

Henley describes his hometown in Texas as a musical crossroads. “Growing up, I heard blues, gospel, bluegrass, at night I could get a 50,000 watt radio station from New Orleans, which is its own musical planet, so I heard things on there that I didn’t hear anywhere else. Top 40 radio wasn’t formatted like it is now, so you’d hear a Beatles song next to Otis Redding or Wilson Picket, and then you might hear Englebert Humperdink after that. So we were exposed to a great variety of music, and I’m grateful for that now.”

Beginning his career at high school as the drummer in an instrumental Dixieland jazz band, Henley says they were inspired by The Beatles to begin singing. “Each member of the band picked a song and we went around the room, and somehow I got the job. But I was already a drummer so I had to learn to sing and play drums at the same time.”

By 1971 Henley had met Glenn Frey and formed The Eagles. They became the biggest selling band in US history, producing dozens of top ten hits. Frey was once quoted as saying “We got along fine, we just disagreed a lot.” Henley echoes this sentiment. “You can’t get four, five, six talented people together and not have disagreements. I think that’s true for every band that ever existed.

“But like it or not, it’s a business. When we got together in the beginning we were very naïve about that. We were in it for the art, we were in it for the music, in it for the girls. We’re in it for the fun of it. And then you realise at some point that you’re in business. And somebody is making a hell of a lot of money off of your work and it’s not you. So like a lot of bands we made a hell of a lot of mistakes and we had to learn the hard way. We were lucky that we met a guy named Irving Azoff who became our manager in 1974 and he taught us how the music business works. It’s a career like anything else and you need to make a living.

“It’s become more and more expensive to do what we do. It’s a big risk going into the recording business and you may not ever see that money back. But I look back on the early days with gratitude mostly, that we were able to stay together as long as we did and create the body of work that we created.”

Don Henley performs at the Vector Arena in Auckland with his 15-piece band on 23 March.