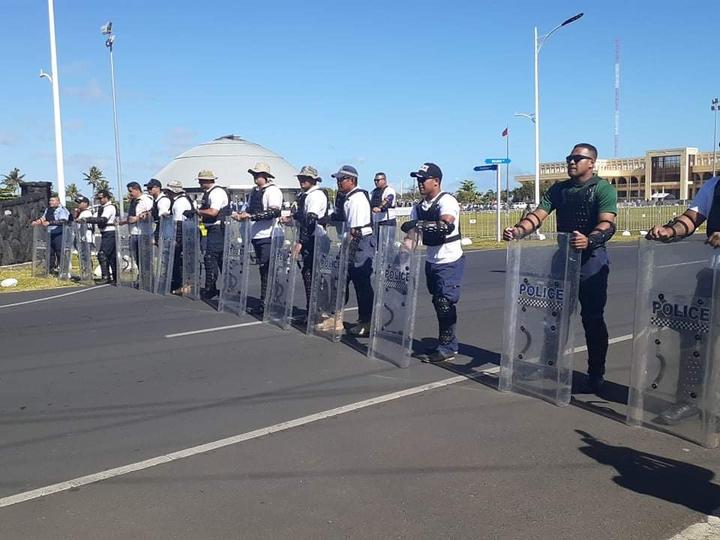 But it is without the members of the opposition HRPP party, who were shut out by the Speaker, Papalii Lio Masipau.

Papali'i announced a ban yesterday, saying the HRPP is still failing to acknowledge that the FAST party won the election.

This follows months of legal squabbles between the parties before the Court of Appeal last month declared FAST were the legitimate winners of the election.

This morning the former prime minister, Tuilaepa Sailele Malielegaoi and fellow members-elect of his HRPP, as well as party supporters, staged a march near the grounds of parliament. The HRPP members-elect are yet to be sworn in as MPs, leaving their status in parliament in doubt.

Police had erected a barricade to deter people from approaching the parliament building.

"There was an exchange of words between Tuilaepa and the senior police officer who was there.

"It ended up Tuilaepa accepting what the police had told them. He made his way down to a breadfruit tree and rested their with all of his members."

Autagavaia said the courts had also closed as a precaution, based on police advice, due to recent threats on social media.

The courts also suspended operations in July amid security concerns in relation to HRPP support convoys and protests, after the party's trenchant criticism of court decisions validating the FAST government.

Tuilaepa has been highly critical of the courts and is facing contempt charges.

"Tuilaepa continues to attack the court of appeal decision and that was the decision which recognised lawfully the swearing-in under the tent of the FAST party. And he said his elected members will not be sworn in by the Speaker but the Head of State. but that's not the protocol under the constitution."

Tuilaepa called the ban from parliament a 'sad day for Samoa', accusing FAST of behaving in a dictatorial manner.

He added that such an event had never happened when the HRPP was in power.

Police are expected to maintain the barricade at parliament tomorrow.