The prime ministers of Papua New Guinea and New Zealand have signed an agreement to build a more collaborative connection. 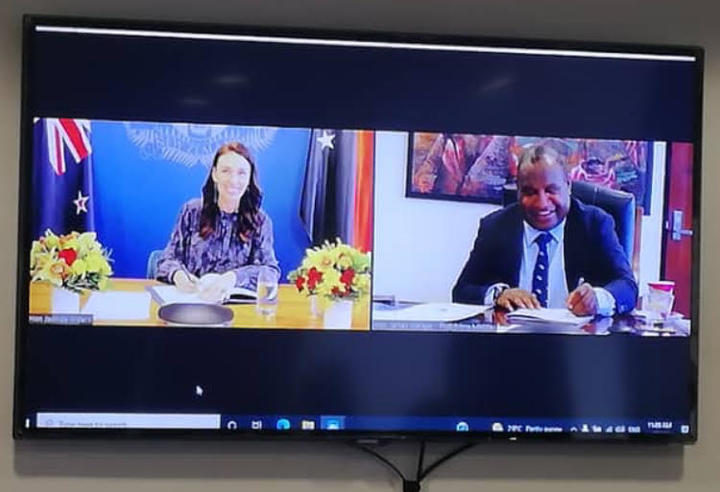 The prime ministers of New Zealand and Papua New Guinea, Jacinda Ardern, and James Marape held a virtual meeting on 14 July, 2021, and signed a Statement of Partnership between the two countries. Photo: Supplied

In a virtual meeting, the leaders signed a Statement of Partnership, renewing efforts to work through issues of trade and economy during the pandemic, as well as regional solidarity.

PNG's Prime Minister, James Marape, said New Zealand and Australia must step up to help minimise the impact of Covid-19 on Pacific economies.

"As I have stated to the Japanese Prime Minister at a recent meeting, and again at the recent Pacific Alliance Leaders Meeting, we would like to call on these bigger countries to step in and intervene, create 'economic bubble' or put in similar measures to assist these smaller economies.

"Many of us are really stuck. Fiji, for example, which survives on tourism dollars. For us, Covid19 is not just a health issue; it is also an economic issue as well," Marape explained.

"It is an important milestone in our relationship. By formalising the values, priorities and principles which underpin our strengthening partnership, we've set a clear pathway forward for the future engagement between our countries."

"We look forward to continuing to work alongside Papua New Guinea on issues facing our Pacific region, including the ongoing management of COVID-19 and the regional economic recovery," Ardern said.

The statement found the two countries committing to "a safe and stable Pacific region where Pacific sovereignty is respected, and unhindered access to open water ways and marine resources are preserved, in line with the international rules-based system".

The two leaders also discussed PNG's autonomous region of Bougainville which in 2019 held an historic referendum in which almost 98 percent of people voted for independence from PNG.

Before PNG's parliament can sit to debate whether to ratify the result, negotiations between Bougainville's autonomour government and PNG's national government, as well as wide-ranging consultations, must first take place.

Marape briefed Ardern on the stage that the negotiations results are now at, adding his gratitude for the long-term support New Zealand has given over the years in resolving the civil war on Bougainville and the subsequent peace process which the referendum is part of.

"Thank you also for your interventions in the matter of the Bougainville Referendum and under your leadership, we have been able to ramp up our warm relationship through the New Zealand and Papua New Guinea Statement of Partnership," Marape said.

He also called on New Zealand's help in once more supplying 'eminent persons' to arbitrate in the Bougainville negotiations.

Other matters on the agenda included public service reforms in PNG based on the New Zealand model; and PNG export of labour to New Zealand.

Marape and Ardern also discussed the move by Micronesian countries to begin withdrawing their membership of the Pacific Islands Forum - with both leaders agreeing to try to prevent this. 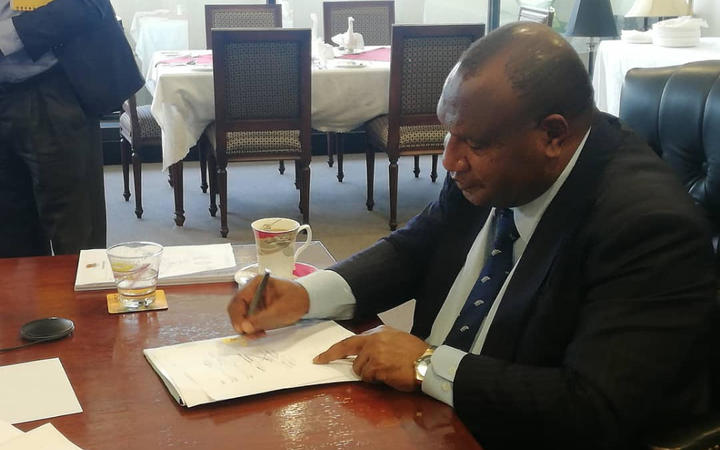 PNG Prime Minister James Marape signs the Statement of Partnership between his country and New Zealand, together with NZ Prime Minister Jacinda Ardern (who he met in a virtual conference) on 14 July, 2021 Photo: PNG PM Media

The meeting was a pre-cursor to the APEC Informal Leaders Retreat on July 16th, with Marape emphasising the collective's role in also supporting the smaller Pacific countries.

"The APEC family of nations can also assist (us) to maintain specific niche trade while being sensitive to COVID19, as many of our island nations are dependent on these niche businesses for the sustenance of our economies."