The explosion of a shell left from World War II has killed one person and left two others in critical condition in Solomon Islands. 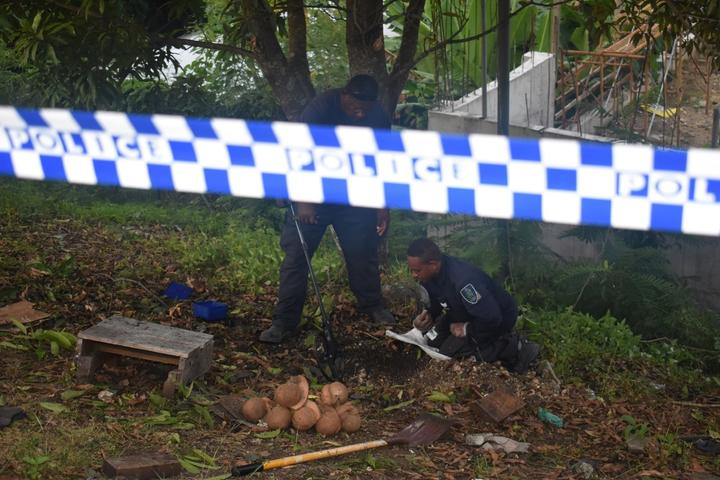 Officers from the police explosive ordnance disposal team inspecting the remaining pieces of the WW2 US 105mm high explosive projectile that killed one person and injured three others in Honiara. May 2021 Photo: Royal Solomon Islands Police Force

The group had built a woodfire to cook food for a fundraiser unaware that buried directly underneath was a 105mm high explosive US projectile left over from the war.

A young man died from injuries sustained during the blast after being taken to hospital and two others remain in a critical condition. The other member of the group sustained minor physical injuries.

Police Explosive Ordnance Disposal (EOD) team officer in charge Clifford Tunuki said the area was cleared of remaining pieces of the bomb but were the scene was still being investigated.

"EOD experts have identified the bomb which is a US 105mm High Explosive Projectile that remain after the World War II. Other parts of the bomb was safely transported to Hells Points since the base of the bomb still containing explosives for render safe," Tunuki explained.

"My condolences to the family of the deceased for the tragic loss of one of their family members," he said.

Solomon Islands was the scene of fierce fighting between allied forces and the Japanese during World War II.

The entire Solomon's archipelago is littered with debris from the war including a large number of unexploded ordnance which continue to sporadically kill and maim locals more than 75 years after the war.

The incident follows the death of two people in Honiara last September due to another explosion of ordnance left from World War II.

The Solomon Islands police force EOD team is a unit under the National Response Department mandated to oversee the safe disposal of World War II Unexploded Ordinance Bombs (UXOs) in the Solomon Islands.

It advises the public to exercise caution if they come across UXO, and to not make any attempt to get near, touch or remove it as it is dangerous and could be fatal.