Guam's Governor Lou Leon Guerrero has pressed the US for investment in public health as the territory struggles with a covid-19 crisis.

At the weekend the governor met with visiting US Secretary of Defense Mark Esper at the Joint Region Marianas headquarters, as Guam struggles with a covid-19 outbreak. 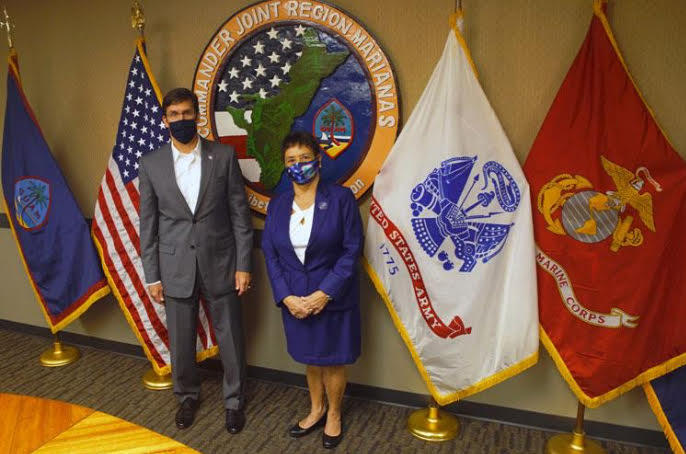 While the focus of the secretary's talks was military co-operation in the region, Guam's health crisis could not be ignored. Hundreds of cases of the virus were confirmed over several days in the US territory last week, with the total approaching 1400, including 10 deaths.

According to a statement from Leon Guerrero following the meeting, Washington wants to invest heavily in the region and strengthen the network between US territories and sovereign Micronesian states.

The governor requested for the return of land that was not needed for more US military installations to be used for construction of a modern medical complex on Guam, including a new hospital and a Public Health laboratory that could also service neighbouring islands in the Northern Marianas.

The significant US military footprint on Guam is already linked to hundreds of confirmed covid-19 cases, with public concern emerging over a lack of social distancing and masks at military events.

Furthermore, the Guardian reports that Esper's Pacific visit, which included a stop in Palau, has also exposed the risk of inbound travel after a member of his advance team to Guam tested positive for Covid-19.

Guam's government has extended its public health emergency until the end of next month.

Meanwhile, Guam also hosted a meeting between Secretary Esper and Japan's Defense Minister Taro Kono on Saturday, when they reaffirmed the strength of the US-Japan alliance.

According to the Pacific News Center, both officials restated their countries' commitment to maintain a rules-based order in the East and South China Seas, and globally.

Leon Guerrero said in her statement that Guam, which is home to the Anderson Air Force Base, must be allowed to have a stronger voice in military discussions.