Facebook has been urged by media freedom advocates to restore an article it pulled ostensibly because the piece violated its rules on nudity.

The article, published by the International Federation of Journalists, reported on concerns raised about media freedom in Melanesia by the Pacific Journalism Review in its latest edition. 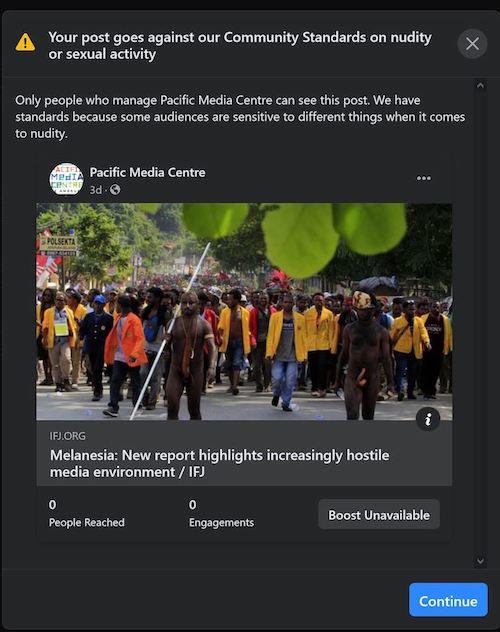 The director of the Pacific Media Centre, David Robie, attempted to share the IFJ's item with several Facebook media groups, but each time immediately received a blocking message from the social media platform.

Dr Robie has received no reply from the social media giant to his repeated attempts to file a challenge over the decision.

His Facebook page now bears a standards breach "warning" that is to remain in force for a year.

Meanwhile, Reporters Without Borders called on Facebook to restore the article, and be more transparent and responsible about respect for the free flow of information.

"This utterly absurd case of censorship shows the degree to which Facebook's arbitrary algorithms pose serious threats to the free flow of information and, by extension, to press freedom," said Daniel Bastard, the head of RSF's Asia-Pacific desk.

"As Facebook has imposed itself as a leading conveyor of news and information and, as such, is bound by the requirements of responsibility and transparency, we call on its regional desk to immediately lift the censorship on this article."

In his correspondence to Facebook, Dr Robie complained of the the arbitrariness of the removal on the postings and the "flawed" Facebook process for filing an objection.

"I am a journalist, media freedom defender and media academic and strongly object to such a notice when this is an arbitrary message (based on algorithms not common sense) related to news and current affairs in the public interest."

"Anybody with common sense would see that the photograph in question was not 'nudity' in the community standards sense of Facebook's guidelines," Dr Robie said, condemning what he called the "tyranny" of the platform's algorithms.

"There is no proper process to challenge or appeal against such arbitrary rulings," he complained.