Indonesian students becoming engaged in the West Papuan human rights struggle are under pressure from authorities.

Human rights advocates have called for the reinstatement of four Indonesian university students expelled for protesting against human rights abuses in Papua, including one young man charged and facing a lengthy prison term for his actions. 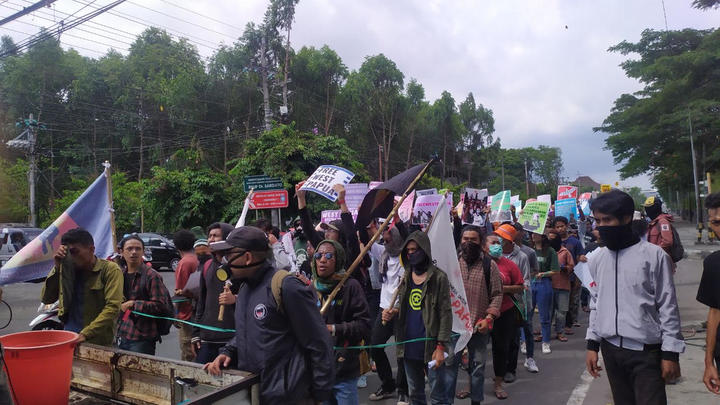 A demonstration for West Papuan self-determination by people from other parts of Indonesia in Yogayakarta. Photo: FRI WEST PAPUA

The four students were kicked out of Khairun University, a public institution on Ternate Island in North Maluku province, for participating in the protest last December.

The protest involved about 50 students who called for Indonesia's government to release Papuan political prisoners and grant Papuans self-determination.

Video footage showed the protesters were forcefully dispersed by police, with some officers roughing up students before a number of arrests were made.

Within days the rector of Khairun University received a notification letter from police and then used this as a reference to sign a decree to dismiss the four students, saying they had breached the ethics of being a student, and threatened national security.

Then the university's deputy rector for Student Affairs & Alumni Affairs, Syawal Abdulajit, issued a further statement saying the students had committed acts of 'treason' by siding with armed Papuan "separatists.

A civil lawsuit brought by the students, challenging their dismissal, is underway in the Ambon state administrative court.

But matters become more serious when one of the four students, Arbi Nur, was last month charged with "treason" and "public provocation", for which he faces a maximum of 26 years in prison.

A spokesman for the Indonesian People's Front for West Papua, or FRI-WP, to which Arbi Nur belonged, said that when the students filed the lawsuit, a second police letter of notification was issued saying an investigation into Nur was ongoing.

"The notification letter from the head of the Ternate police can't be used as a lawful reference to expel Arbi and other students," said FRI-WP's Nanang Kosim.

Human Rights Watch's Andreas Harsono said authorities should drop the charges against Arbi Nur, as they violated his right to freedom of expression.

He also urged the Indonesian government to investigate the matter, as well as the alleged excessive use of force by police against students. 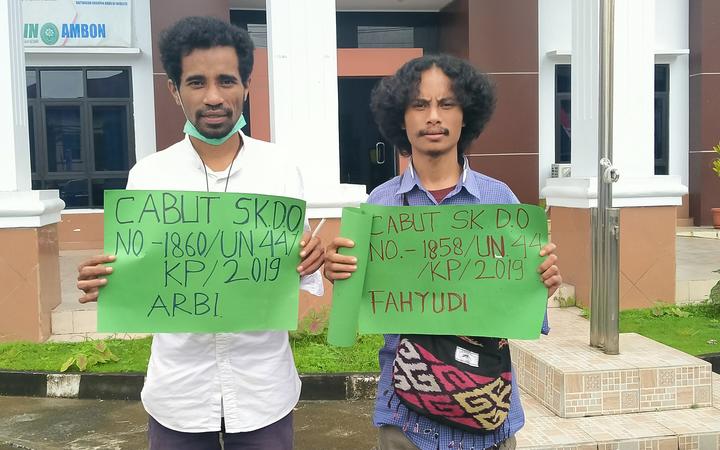 Two Indonesians protest the expulsion of four students from Khairun University for their role in a Papua human rights protest. The protest is outside the Ambon state administrative court where the students are challenging the expulsion. Photo: Mahasiswa Unkhair Ternate

Established four years ago, FRI-WP is mainly made up of university students and activists, and has a growing presence in the country.

According to Nanang Kosim, with the Black Lives Matter movement being applied within the local context, more Indonesians were now paying attention to racism against West Papuans.

But when it came to their public actions, FRI-WP and others who spoke up, often have problems from police or military, he explained.

"Beating or yelling at us 'traitor to the nation'; stalk or terrorise us, use propaganda, or as recently happened, some of us were accused of treason and expelled from campus," Kosim said.

"In blocking our activities security forces often use other parties. For example when they forcibly dispersing our discussion or demonstration, police or army usually use reactionary civil society organisations or some organisation that they built to attack us.

"They did it so it would look like horizontal conflict, so they can run from human rights violations."

Equally disturbing is the picture emerging of a collaboration between university management and police to pressure students involved in activities related to the human rights problem in West Papua.